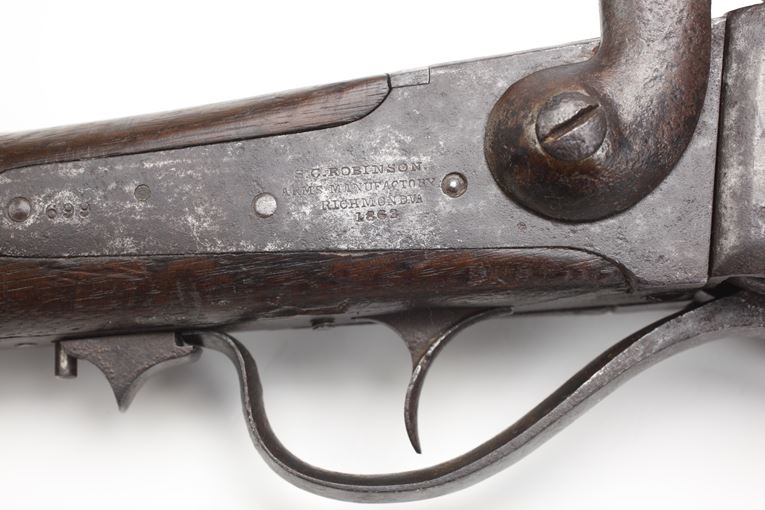 A simplified copy of the popular Sharps breechloaders used by mounted Federal troops, this Confederate carbine was issued to cavalry units. SN 669

Fashioned after the Hartford-made Model 1859 Sharps, these Richmond-made firearms are quite serviceable and were much sought-after. Approximately 5,000 were produced, but they saw hard use, and only a few specimens remain that are even in fair condition. This last fact is a tribute to the desirability of such guns among Confederate forces.

The Sharps New Model 1859, introduced in that year, was available as a carbine, and in round-barrel military rifle or octagonal-barrel sporting rifle versions. Its straight-breech design is credited to Richard S. Lawrence, formerly of Robbins & Lawrence, who had become the superintendent of the Sharps Rifle Company. This design, in conjunction with a breechblock-mounted plate capable of slight rearward movement when under pressure, created a moderately effective gas seal. New Model 1859 arms also employed an improved version of the Sharps pellet primer system which allowed the pellet feed mechanism to be disengaged. Ordinary percussion caps could then be used, with the supply of pellet primers held in reserve. Like earlier Sharps designs, the Model 1859 fired a glazed linen combustible .52 caliber cartridge. When closed, the breechblock sheared off the rear of the cartridge, exposing the propellant. During the Civil War, the Federal government bought over 80,000 Sharps carbines and nearly 10,000 Sharps Rifles.

In 1874, the firm was reorganized as the Sharps Rifle Co., with operations remaining in Hartford. In 1876, manufacturing was moved to Bridgeport, Connecticut, where it remained until 1881. This period saw the manufacture of some of the more notable of Sharps longarms, beginning with introduction of the Model 1874 Rifle. Nicknamed "Old Reliable," this arm, available in a variety of calibers, barrel lengths, sights, and other features, became a favorite with both Plains buffalo hunters and competition shooters. Many Fancy-Grade models featured engraving which ranged from simple scrollwork to elaborate hunting or western scenes on their surfaces. The Sharps Model 1877 shared in the popularity of its predecessor.

These deluxe-grade heavy-barreled .45 caliber rifles were designed specifically for Creedmoor and other long-range target shooters. Only 100 of these were produced, and they are as sought-after today by collectors as they were by competitors at the time of their introduction. The last rifle to be produced by the Sharps Rifle Company was the Model 1878 Sharps-Borchardt Rifle. This arm was developed by Hugo Borchardt, who later became famous for his automatic pistol designs. These rifles, with their flat-sided frame and hammerless appearance, differ notably from earlier Sharps designs. Like the Model 1874, the Sharps-Borchardt was available in a variety of stocks, barrel lengths and weights, sights, calibers, and other features, including deluxe grade models. These popular rifles were produced until 1881, when the Sharps Rifle Company went bankrupt and ceased operations.