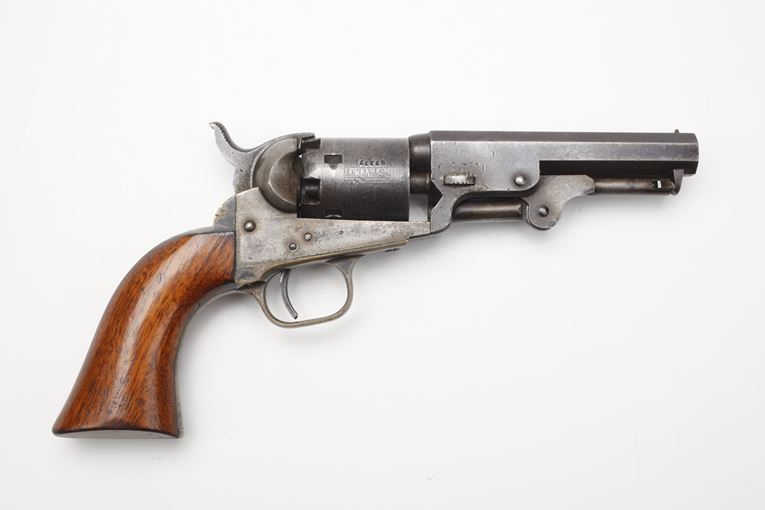 The Model 1849 Pocket Revolver, a replacement for the Baby Dragoon, was the most widely produced of any Colt percussion pistol. SN 87377


The Model 1849 Pocket Revolver, a replacement for the Baby Dragoon, was the most widely produced of any Colt percussion pistol. Nearly 340,000 were manufactured during a 23-year production run that ended in 1873. Although most production took place in Colt's Hartford factory, approximately 11,000 were made in London. These pistols were available with octagonal barrels ranging between 3 and 6 inches in length. The one-piece walnut grips, and casehardened frame, hammer, and loading lever previously featured on Colt's Walker and Dragoon revolvers was carried over to the Model 1849 Pocket, however, the square-back trigger guard was replaced with a round guard, and the engraved cylinder featured a stagecoach holdup scene rather than the Texas Ranger - Indian fight that had been standard on earlier Colts. Approximately 4,000 so-called "Wells Fargo" variants, with 3-inch barrels and without loading levers, were also manufactured.

Samuel Colt was born in Hartford, Connecticut on July 19, 1814. He showed an early fascination with science, and during his youth, Colt studied both chemistry and mechanics. While still a boy, he attempted to produce a pistol that was capable of firing multiple shots without reloading, but his efforts were unsuccessful. In 1830-31, while the sixteen year-old Colt was serving as a seaman aboard the brig Corvo, he observed the ship's wheel and the relationship of the various spokes to the center hub. This inspired him to make a wooden model of a revolving pistol. Although others had already experimented with revolvers, Colt's design was the first to automatically rotate the cylinder when the gun was cocked. After his return to the United States, he showed his model to his father, Christopher, and to Henry L. Ellsworth, a friend of the elder Colt who was then serving as Commissioner at the U.S. Patent Office in Washington. Both men encouraged Samuel to continue with his work and to seek a patent for his design.