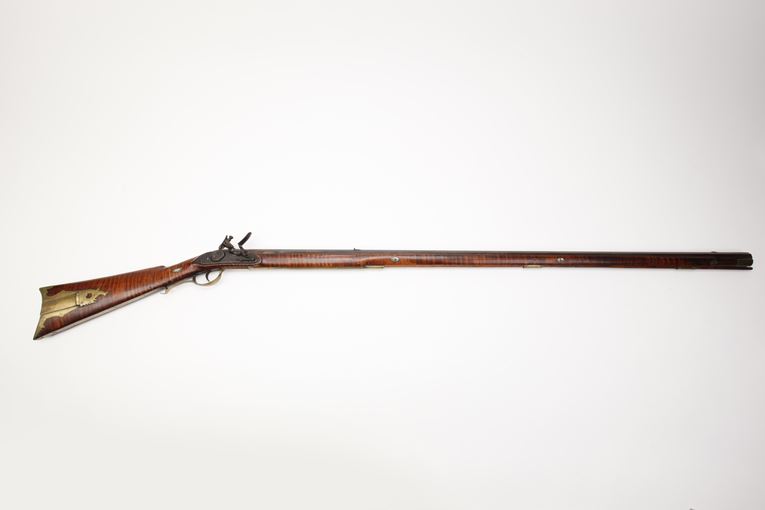 D. Christ manufactured gun barrels in eastern Pennsylvania from 1780 to 1810. This Lancaster-made rifle was reconverted to flintlock ignition by a collector seeking to show its original configuration. The rifle features an unusual patchbox sideplate extension that extends from the top plate to the toe plate. The pinned stock is of curly maple, with incised forestock carving and lines running from the lock mortise to the front pin escutcheon. The Maslin-style lock, with bridle and rounded end, is most likely imported.


Historians are in general agreement that Lancaster cradled the Pennsylvania gunmaking industry, and that in Lancaster County the long rifle first evolved from its rather clumsy European progenitor to the graceful and unique American Kentucky. While this evolution at first took rather slow, logical steps, soon the European Yaeger rifle and the Kentucky had little in common. In Europe, rifles were seldom used in warfare. As in America, they were primarily the gun of the hunter Ð variously known as the Yaeger, Yager, Jager, or Jaeger. Short-barrel rifles were preferred for the forest hunting of central Europe, where the riffeln originated. The Swiss needed somewhat longer barrel guns for hunting the chamois and other Alpine game, but their rifles differed little from the thick-stocked, heavy guns of their neighbors. Travel distances in Europe were not especially great; supplies were easily obtained; and hunters were generally wealthy.

The situation was quite different in the New World. American riflemen, who were generally endowed with hope and courage rather than material wealth, often traveled long distances through locales lacking in supplies. The great need for a more accurate, more economical rifle prompted Pennsylvania gunmakers work long hours at their benches, trying new principles and shaping available materials to new forms. In the process, the traditional Yaeger rifle went through transformations:  The broad butt-stock was made thinner with more efficient contour; the butt progressed from straight musket-like form to a modified crescent.  Easily damaged or lost wood patch-box covers were replaced by lids of hinged brass or silver. Trigger guards were reduced in size, given a rather straight under-line, and made sturdier and simpler.  Forestocks were lengthened and slenderized, brass fore-ends replacing bone or horn. Native maple replaced European walnut, and a decorative tiger-stripe of dark red or brown was applied where no natural curl or striping showed in the grain. It was found that maple that grew on thin rocky soil produced a closer and curlier grain than trees native to open ground and heavy soil. The trees were cut into 2" planks which were air-dried for 4 years before they were at their best. The charcoal iron barrels were lengthened, and bores were made smaller. A slow twist was employed for the rifling, of which the groove depth was often less than that found on the Yaeger rifles. A heavier powder charge was employed in relation to bore size.

A survey of 200 barrels indicates that they ranged from 40" to 44", with a very few as long as 50". One-third had 7-groove rifling, one quarter had 8-groove rifling, a very few had straight rifling, and the remaining one third were smoothbores.  The fragile ivory, bone, and pearl decorative inlays of European arms had no place in American guns. Coin silver or brass were used sparingly for patch-boxes and inlays in the flintlock era, more extensively in the percussion period.  Slings, by which the short, heavy European guns were usually carried, were eliminated on the American long rifle.  In short, the Pennsylvania rifle was somewhat more accurate, used less powder and lead, had longer range, and was of graceful contour and handsome finish. It was for practical reasons, therefore, that the average .65 caliber bore of European guns was eventually reduced to an average .45 caliber bore typical in the Pennsylvania-made guns. This was considered large enough for the wild game or the hostile Indian. As larger game became more scarce, bores were reduced further, or in some instances made smooth to use shot.