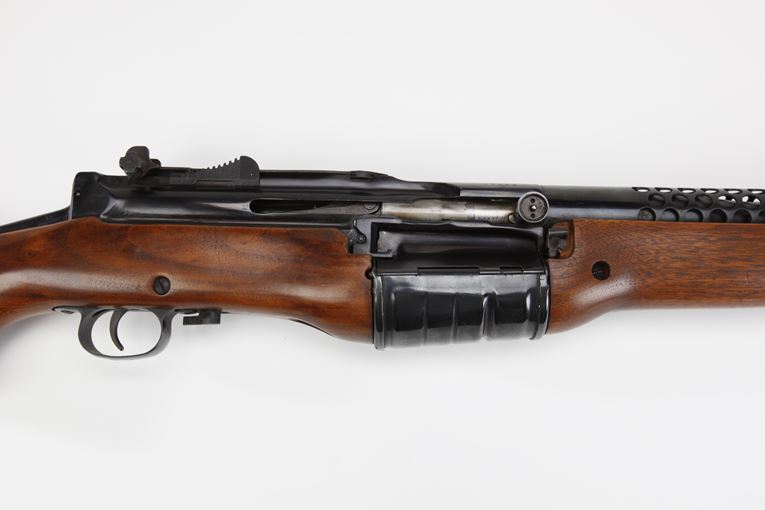 This example bears an NRA text marking on the stock to signify that it was examined by NRA technical staff. Many military-surplus Johnson rifles were sporterized and sold to NRA members through advertisments in AMERICAN RIFLEMAN magazine. SN B3443

His original prototype, chambered for the U.S.-standard 30-Ô06 cartridge, was recoil operated, a feature not seen on high-power combat longarms of the time. Extensive testing led to the production of four additional prototypes through an agreement between Johnson and the Marlin Firearms Company. The Johnson rifle was received favorably by Army Ordnance officials who conducted a series of trials at Aberdeen Proving Grounds in August 1938, but several design flaws were identified. Johnson modified his design to correct these deficiencies, and his efforts resulted in yet another series of prototypes in which the original vertical-feed magazine was replaced with a bulging "fish belly" rotary magazine that could be loaded with the bolt closed, either singly or with M1903 stripper clips. These rifles also featured a detachable barrel, and a stronger bolt with eight locking lugs.

In a subsequent evaluation by the Army, this improved design also failed to gain acceptance, as the Johnson was declared to be "not materially superior to the M1 Garand." This result didn't end the issue however, as the recently-adopted M1 was found to have problems of its own. As criticism for the new rifle rose, Congress threatened to halt funding for continued M1 production unless the Army could show that these arms were in fact suitable for combat use by U.S. troops. A third trial was set for May 1940, and was attended by high ranking military and civilian leaders. The Johnson performed well, but the M1 was vindicated by these tests. Congressional leaders saw no reason to adopt a second rifle, especially since the government already had an established a production facility for the Garand. Although the Army was unwilling to adopt Johnson's design, the Marine Corps considered the rifle for a place in its arsenal.

The Marines had not yet adopted the M1, and a series of rifle trials were held in San Diego in November 1940. In addition to the M1, the Johnson rifle also competed against a design submitted by Winchester. At the conclusion of the trials, the M1 again came out on top, but Marine officers believed all of these designs to be inferior to the standard M1903 Springfield bolt-action rifle. One criticism of the Johnson that had not yet been addressed was its failure to perform reliably with a fixed bayonet, as the weight of this implement interfered with the rifle's recoil operation. Johnson did not consider the bayonet to be at all useful in modern combat, but nonetheless, he designed a lightweight 8-inch triangular model, nicknamed the "tentpeg" by the Marines, in response to his critics. Failing to secure orders at home, Johnson turned his efforts to the overseas market.

In 1941, the Dutch government ordered 70,000 rifles for its troops in the Dutch East Indies. As Johnson had no manufacturing facilities for his self-designated Model of 1941 military rifle, his business organization, the Johnson Automatics Trust, sought an agreement with an established firm for rifle production. One of the advantages of Johnson's design was that these rifles did not require specialized tooling for production, a feature that proved advantageous in a time when most existing firearms manufacturers were working at capacity to fill military contract orders for the U.S. and various foreign governments.

An agreement was reached between Johnson Automatics and the Universal Windings Company which resulted in the establishment of the Cranston Arms Company of Cranston, Rhode Island. This firm also produced Johnson's Model of 1941 Light Machine Gun, which shared several design features with his semi-automatic rifle. Few M1941 rifles had been shipped prior to the Japanese capture of Dutch possessions in the Pacific. Remaining rifles were embargoed to keep them from capture as well. These remained in storage until after the war, and their precise fate remains unknown. After the United States entered the war in December 1941, demand for military arms soared. By this time, the Marine Corps had followed the Army's lead in adopting the M1 as its standard battle rifle, but production was unable to meet demand. In addition, the Army had first priority on available supplies and on future output from Springfield Armory and Winchester, the two manufacturers of these arms. The Johnson rifle was adopted by the Marines for issue to Marine Raiders and to newly-formed Para-Marine airborne units, and these rifles saw action in the Solomons campaign of 1942. As M1s became available to Marine units, the Johnson rifles were withdrawn from combat use. Only a few thousand of these arms had been procured by the U.S. government before production ended in 1944, and, in addition to their limited use with the Marine Corps, Johnson rifles were issued to clandestine O.S.S. operatives. Some 7mm variants of the Johnson M1941 rifle were manufactured in the post-war years for use by South American military forces. In addition to military versions, some commercially-produced sporting model Johnson rifles were produced as well, but few of these have survived. Although sold as surplus after the war, the M1941 Johnsons are also scarce today, owing to their limited production span, combat attrition, and the conversion of some surviving examples for sporting use.