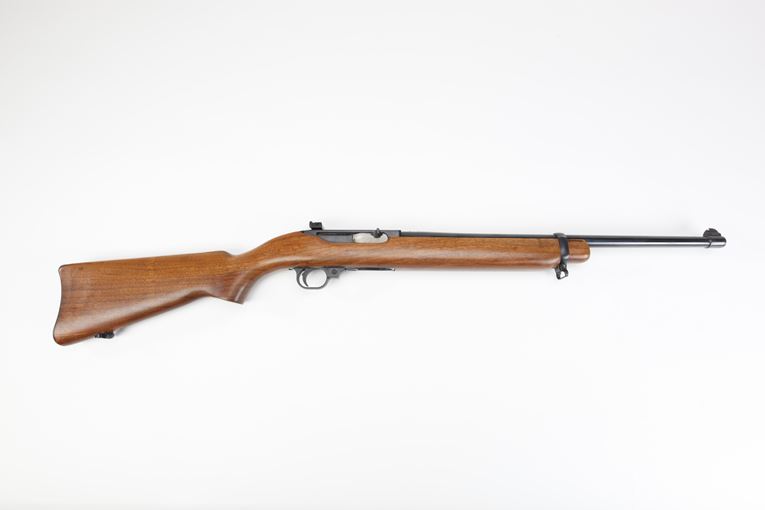 Ruger's semi-automatic carbine was intended for hunters looking for a short-range, medium game rifle. First offered in 1961, the Ruger carbine was made until 1985. A revised version, the 99/44 Deerfield carbine became available in 2000. SN 71096


William Batterman Ruger was born on June 21, 1916 in Brooklyn, New York. As a young man, he developed an interest in firearms, their design, and their operation. While attending the University of North Carolina, Ruger designed a machine gun, and after leaving the school, he worked in a North Carolina machine shop and as a designer for Springfield Armory. In 1941, Ruger was hired by Auto Ordnance, where he spent the war years improving light machine gun designs. In the post-war years, he briefly turned his attention elsewhere and founded his own machine shop and tool manufacturing company, the Ruger Corporation, based in Southport, Connecticut. During this period, Bill Ruger also worked on a design for a semi-automatic .22 caliber rimfire pistol. Although his company encountered severe financial difficulties, Ruger continued with this project, and eventually received a U.S. patent for his work. In 1949, Ruger formed a partnership with Alexander Sturm, an artist, author, and firearms collector. Sturm provided the capital, Ruger his patent, and the two entrepreneurs began to produce and market their semi-auto pistol. This gun, with its red eagle crest medallion on the grip panels, met with favor among both shooters and dealers, and its design allowed it to be manufactured less expensively than the competing Colt Woodsman. Sturm, Ruger & Co. quickly became a financial success. Over the years, this gun has been offered in various configurations including a military training version, but after a 50 year production run that has seen the production of over 2 million pistols, the popular Sturm Ruger .22 semi-auto remains basically unchanged. In 1951, Alexander Sturm died, and Bill Ruger changed the color of the company's grip panel medallion from red to black. The company continued its operations, and in 1953, Sturm, Ruger & Co. began to market a single-action revolver, first in .22 caliber, and later in larger centerfire chamberings, including .44 Magnum caliber. These guns were also a success, and they gained a reputation for quality and reliability. Beginning in 1973, the company introduced the New Model single-action revolvers, which employed a transfer bar safety mechanism similar to that used in double-action models. This feature prevents accidental discharge if the gun is dropped, thus allowing these revolvers to be carried safely with six rounds in the cylinder. By 1959, the company relocated to a larger facility in Southport, and within a year, this new plant was expanded to meet increased demand. Sturm, Ruger & Co. later added rifles to their product line, beginning with the introduction of a .44 magnum autoloading carbine in 1960. This was followed by other models, including the semi-auto Mini-14 and Mini-Thirty rifles, the single-shot No. 1 and No. 3 rifles, the lever-action Model 96 Carbine and semi-auto 10/22 rifle, both of which feature a unique rotary magazine, and the Mauser-type M-77 bolt-action rifle. Ruger also introduced an over/under shotgun line, known as the Red Label, for the skeet, sporting clays, and hunting markets. In 1971, Sturm, Ruger & Co. began production of double-action centerfire revolvers intended for the law enforcement and personal defense market. The popular Speed-Six was available in .38 Special, .357 Magnum, or 9mm calibers. This model was later joined by the Security-Six and Police Service-Six. The large-frame Redhawk revolver, chambered for .357 Magnum, .41 Magnum, and .44 Magnum, joined the line in the 1980s, as did the GP-100 and SP-101 revolvers. In addition to single- and double-action revolvers, the company also manufactures semi-automatic centerfire pistols in 9mm, .40 S&W, and .45 ACP calibers. In addition to its firearms manufacturing activities, Sturm, Ruger & Co. also is the largest producer and user of investment castings in the industry. The investment casting process allows parts to be manufactured with a minimum of machining, but without sacrificing strength. These parts also help to keep production costs down, a savings which is passed along to the consumer. Pine Tree Castings, the company's Newport, New Hampshire subsidiary, was founded in 1963 to provide investment castings for its parent company. This precision facility also manufactures castings for other uses, including titanium golf clubs, brake rotors, and medical implants. In 1991, Sturm, Ruger & Co. ceased its manufacturing operations in Southport. The company's offices remained there, but rifle and shotgun production moved to Newport, New Hampshire, and pistol production was relocated to Prescott, Arizona. The company's success over the last half-century has been due to a combination of factors. Among these are an ability to identify the diverse needs and desires of the shooting community, including police and military end-users as well as sportsmen, designs that fill these needs, and extensive use of modern technology to allow high-quality firearms to be manufactured inexpensively. From its humble beginnings in Southport, Sturm, Ruger & Co., has grown to employ over 2,000 workers in its various manufacturing and administrative facilities in Connecticut, New Hampshire, and Arizona. On July 6, 2002, William B. Ruger died peacefully at the age of 86 in his Prescott, Arizona home after a lengthy period of failing health. He is survived by his son, Bill Jr., current Chairman of Sturm, Ruger; his daughter, Carolyn R. Vogel; and by six grandchildren and ten great-grandchildren.