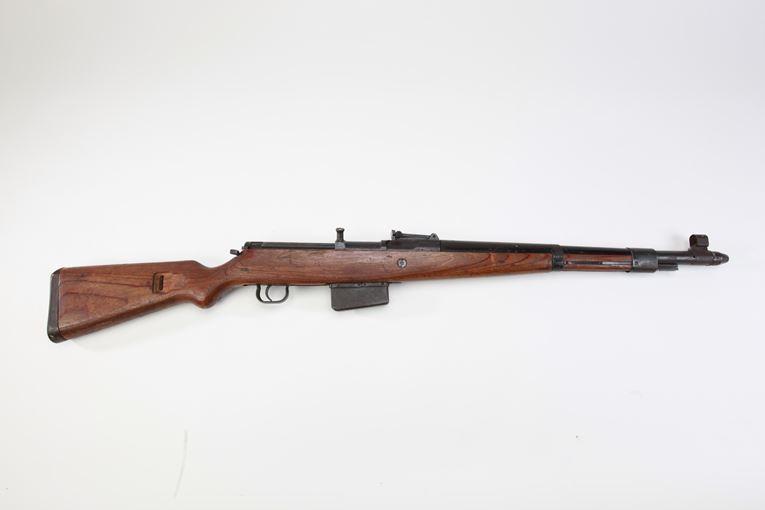 The Walther-designed Gewehr 41 semi-automatic rifle was intended to replace the bolt-action Mauser that had been in German military service since before the First World War and to allow Nazi infantrymen to offset the advantages of Red Army soldiers equiped with the Tokarev rifle. This design proved unsatisfactory in combat and was later replaced by the re-designed Karabiner 43. This example was produced in 1942.

The Mauser also featured an operating handle which could be used to manually cycle the action and chamber a cartridge, but it did not cycle when the rifle was fired. The 41(W) utilized a muzzle cone to trap gas, which was then channeled to operate the piston, operating rod, and bolt. The Walther rifle proved to be the better of the two, and it was subsequently selected as a new infantry arm. Mauser's design was abandoned within two years of its introduction. The Model 41 was not without its problems however, and troops equipped with the new rifle complained bitterly about its weight and handling characteristics, as well as its tendency to foul and corrode.

These rifles were also expensive to produce. Walther attempted to address these problems through modifications which later resulted in the new Gewehr 43, later re-designated the Karabiner 43. The G43 and K43 rifles combined the original 41(W) bolt mechanism and a top-mounted gas port with an operating system based on that used in the Soviet Tokarev semi-auto rifle. In addition, the bolt operating handle was re-located to the left side of the receiver, and earlier solid wood stocks were replaced with laminated woods. Unlike the finely-made 41(W), these arms utilize castings, forgings, and stampings instead of the machine-finished parts of their predecessors. Wood stocks were also rough in comparison to the 41(W), and hand guards were either wood or plastic. One improvement over the earlier Walther design was the inclusion of a detachable magazine.

The G43 also featured a scope mount for the ZF41 telescopic sight and was frequently used for sniper applications. By the war's end, Germany had developed an early infrared night sight that could be used with these rifles, but their excessive weight and extremely short battery life severely limited their usefulness. The Gewehr and Karabiner 43 were produced until the end of the war at the Walther factory in Zella-Mehlis, Germany, and at Berlin-Lubecker Maschinenfabrik and Gustloff Werke. Due to their limited production, these rifles did not see widespread use, and were issued primarily to snipers on the Eastern Front, and in Italy, France, and Germany.

Although they were superior in operation to the earlier G41, workmanship on these rifles was of fair to poor quality, depending on their date of manufacture. The extractor was a known weak point of the G43, and spares were typically provided. Instruction manuals were also issued with these rifles, and as manpower shortages became acute, these printed instructions were often the only rifle training available to soldiers. As Germany's fortunes grew increasingly dark, the country's once-proud armaments industry was forced to adopt inferior designs that could be quickly and cheaply produced using whatever materials that were available. The Volkssturm Gewehr 1 and Volkssturm Karabiner 98 were last-ditch arms that were of extremely crude construction.

The semi-automatic VG1 used the same barrel and magazine as the G43. In many cases they were truly last resort arms, as G43s began to disappear from production due to unavailability of parts. Their inferior construction sometimes made the VG1 as dangerous to those behind the trigger as to enemy soldiers in front of the muzzle. The VK98 used a Mauser 98 action, coupled with old or recycled barrels. Most were single-shot arms, but some also used the G43 magazine. Both utilized crude unfinished and unseasoned wood for their stocks.

Despite the development of these semi-auto rifles, they never replaced the venerable Mauser 98 bolt-action rifle in Germany's arsenal. The Nazi High Command initially resisted the adoption of this type of combat arm, even though both the United States and the Soviet Union had developed gas-operated rifles for their armed forces. The late introduction of the G41 and its successors, as well as the declining output from German factories as the war progressed, ensured that insufficient copies would be produced before the collapse of the Third Reich. After the war, the G43 soldiered on for a time as the Czech Army's sniper rifle, while others were sold to nations in Africa and the Middle East. Many Walther rifles also came home with returning American veterans as war souvenirs.