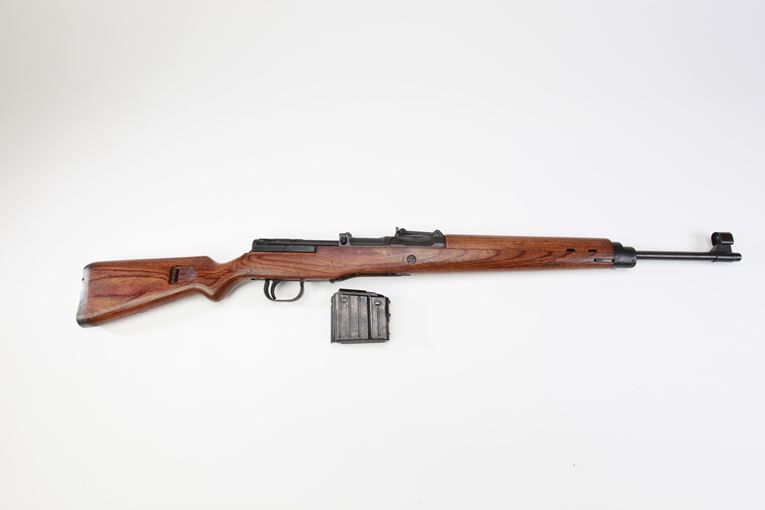 One of the last German semi-automatic rifles made in 1945, this late production K43 does not bear a serial number.

The Mauser also featured an operating handle which could be used to manually cycle the action and chamber a cartridge, but it did not cycle when the rifle was fired. The 41(W) utilized a muzzle cone to trap gas, which was then channeled to operate the piston, operating rod, and bolt. The Walther rifle proved to be the better of the two, and it was subsequently selected as a new infantry arm. Mauser's design was abandoned within two years of its introduction. The Model 41 was not without its problems however, and troops equipped with the new rifle complained bitterly about its weight and handling characteristics, as well as its tendency to foul and corrode. These rifles were also expensive to produce. Walther attempted to address these problems through modifications which later resulted in the new Gewehr 43, later re-designated the Karabiner 43.

The G43 and K43 rifles combined the original 41(W) bolt mechanism and a top-mounted gas port with an operating system based on that used in the Soviet Tokarev semi-auto rifle. In addition, the bolt operating handle was re-located to the left side of the receiver, and earlier solid wood stocks were replaced with laminated woods. Unlike the finely-made 41(W), these arms utilize castings, forgings, and stampings instead of the machine-finished parts of their predecessors. Wood stocks were also rough in comparison to the 41(W), and hand guards were either wood or plastic. One improvement over the earlier Walther design was the inclusion of a detachable magazine. The G43 also featured a scope mount for the ZF41 telescopic sight and was frequently used for sniper applications.

By the war's end, Germany had developed an early infrared night sight that could be used with these rifles, but their excessive weight and extremely short battery life severely limited their usefulness. The Gewehr and Karabiner 43 were produced until the end of the war at the Walther factory in Zella-Mehlis, Germany, and at Berlin-Lubecker Maschinenfabrik and Gustloff Werke. Due to their limited production, these rifles did not see widespread use, and were issued primarily to snipers on the Eastern Front, and in Italy, France, and Germany. Although they were superior in operation to the earlier G41, workmanship on these rifles was of fair to poor quality, depending on their date of manufacture. The extractor was a known weak point of the G43, and spares were typically provided. Instruction manuals were also issued with these rifles, and as manpower shortages became acute, these printed instructions were often the only rifle training available to soldiers.

As Germany's fortunes grew increasingly dark, the country's once-proud armaments industry was forced to adopt inferior designs that could be quickly and cheaply produced using whatever materials that were available. The Volkssturm Gewehr 1 and Volkssturm Karabiner 98 were last-ditch arms that were of extremely crude construction. The semi-automatic VG1 used the same barrel and magazine as the G43. In many cases they were truly last resort arms, as G43s began to disappear from production due to unavailability of parts. Their inferior construction sometimes made the VG1 as dangerous to those behind the trigger as to enemy soldiers in front of the muzzle. The VK98 used a Mauser 98 action, coupled with old or recycled barrels. Most were single-shot arms, but some also used the G43 magazine.

Both utilized crude unfinished and unseasoned wood for their stocks. Despite the development of these semi-auto rifles, they never replaced the venerable Mauser 98 bolt-action rifle in Germany's arsenal. The Nazi High Command initially resisted the adoption of this type of combat arm, even though both the United States and the Soviet Union had developed gas-operated rifles for their armed forces. The late introduction of the G41 and its successors, as well as the declining output from German factories as the war progressed, ensured that insufficient copies would be produced before the collapse of the Third Reich.

After the war, the G43 soldiered on for a time as the Czech Army's sniper rifle, while others were sold to nations in Africa and the Middle East. Many Walther rifles also came home with returning American veterans as war souvenirs. Walther Waffenfabrik was founded in 1886 by German firearms designer Carl Walther (1860 - 1915). The Walther family's connection to firearms design and manufacture can be traced to Matthias Conrad Pistor, chief armorer and gunsmith at Kassel Arsenal during the 18th century. Pistor later opened his own manufactory in the German province of Thuringia. This area, rich in both natural resources and industry, became home to such noted companies as both Walther and Sauer. Arms produced in the region were used both in the German states and throughout Europe, with some finding their way to North America, India, and Australia.

In addition, many gunsmiths, craftsmen, and artisans from this region later relocated to eastern Pennsylvania, where they became involved in the production of "Kentucky" long rifles. In 1908, Carl Walther and his eldest son, Fritz designed and manufactured the Model 1, which was the first successful German pocket pistol to chamber the popular 6.35mm/ .25 Colt APC ammunition. This pistol and its successors competed favorably with other notable designs, including the Browning-FN Model 1905 and the Colt .25 ACP. Father and son later designed and produced successful police and military pistols in 9mm Parabellum and 9mm Kurz/.380 ACP. During the First World War, the company also produced the P-08 Luger pistol for the German armed forces.

After Germany's defeat in 1918, arms production was severely restricted by the Treaty of Versailles. Walther turned briefly to the production of optical instruments before returning to arms manufacturing under special permit from the League of Nations. Among the firearms produced during this period were the Model 8 and Model 9 Pocket Pistols, as well as sporting rifles and shotguns. In 1929, the Walther PP became the world's first commercially successful double-action auto pistol. This was followed in 1931 by the smaller PPK. Both of these pistols found favor with European police departments and, later, with German military officers and members of the Nazi Party. The company also produced the successful Olympic Model .22 pistol, which became the standard among competitive pistol marksmen.

By 1936, Walther had produced its one millionth pistol, and was poised to embark on a new era in its history. Having come to power in 1933, Adolf Hitler sought to rebuild Germany's military apparatus. German ordnance officers sought a replacement for the P-08 that was simpler in design and easier to manufacture. In 1937, Walther introduced the HP, a double-action 9mm Parabellum pistol that was later adopted as the P-38. By the end of the Second World War, over one million P-38s had been produced, many of which were "liberated" by American troops and carried in preference to U.S.-issued sidearms.

In fact, the P-38 was so popular that during the Battle of the Bulge, German officers ordered that any captured G.I. with a P-38 in his possession was to be shot! Walther also produced the Gewehr 43 and Kar. 43 gas-operated semi-automatic battle rifles during this period to provide German troops with an equivalent to the American M1 Garand and Soviet Tokarev semi-auto rifles. As the war progressed, Allied bombs fell in greater numbers on German industry. Amazingly, the Walther plant survived the war intact, and was occupied by American troops in April 1945.

By June 1945, Zella-Mehlis, the home of Walther Waffenfabrik, had become a part of the Soviet Occupation Zone, and the Walther factory was dismantled and machinery was moved to the Soviet Union. Fritz Walther escaped to the American Zone, and within a few years had established new factories in Ulm, West Germany. In addition to resuming production of the PP, PPK, and P-38 pistols and sporting rifles, Walther entered into an agreement with the Swiss firearms manufacturer Hammerli to produce the Olympia .22 pistol. In 1993, Walther merged with Umerex Sportwaffen GmbH & Co. KG.