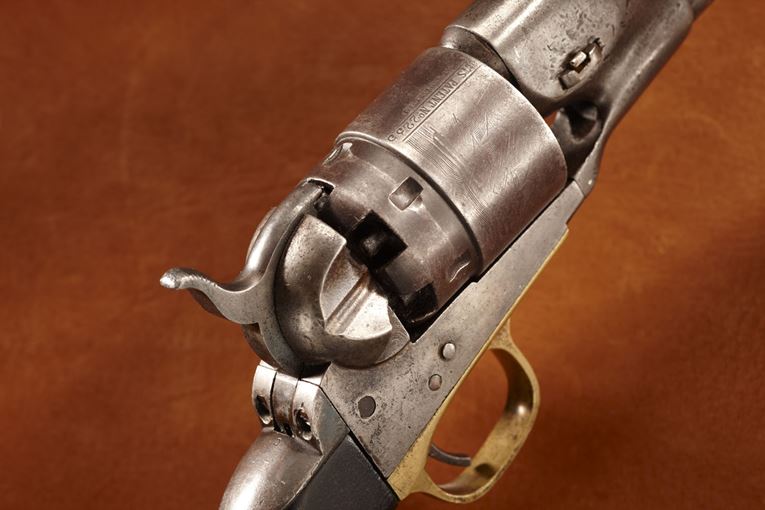 Among Union forces, the Colt Model 1860 was the most commonly used revolver of the Civil War. This design was manufactured from 1860 through 1873, with over 200,000 produced. Of these, 127,156 were purchased by the U.S. government. In post-war years, many Model 1860 revolvers were modified for use with metallic cartridge ammunition.


This well-known six-shot, single-action revolver has an eight-inch round barrel rifled with seven grooves. Some scarce early specimens, usually with fluted cylinders, have 7 1/2-inch barrels. Total length is 14 inches, weight is two pounds 11 ounces, and cylinder length is 1-13/16 inches. This revolver has a naval engagement scene on its cylinder like the 1851 and 1861 .36 caliber models. It has a brass blade front sight and the rear sight is a notch cut in the hammer lip. It has a semi-oval brass trigger guard and iron backstrap. Recoil shield and butt of the military revolvers are notched for a detachable carbine stock, although very few were issued with one.

These revolvers vary in such details as a four-screw frame model and a three-screw frame model, but this general description is typical of this revolver "as issued" for Civil War use. Stock was walnut, oil-finished and stamped with inspectors' initials, such as "ADK" in military revolvers. The top of the barrel is stamped "-- ADDRESS COL. SAML COLT NEW-YORK U. S. AMERICA--".

Colt's Patent Fire Arms Manufacturing Company, Hartford, Connecticut, produced 200,00 of these revolvers, including the civilian model, from 1860 into 1873.

In 1830-31, while the sixteen-year-old Colt was serving as a seaman aboard the brig Corvo, he observed the ship's wheel and the relationship of the various spokes to the center hub. This inspired him to make a wooden model of a revolving pistol. Although others had already experimented with revolvers, Colt's design was the first to automatically rotate the cylinder when the gun was cocked. After his return to the United States, he showed his model to his father, Christopher, and to Henry L. Ellsworth, a friend of the elder Colt who was then serving as Commissioner at the U.S. Patent Office in Washington. Both men encouraged Samuel to continue with his work and to seek a patent for his design.