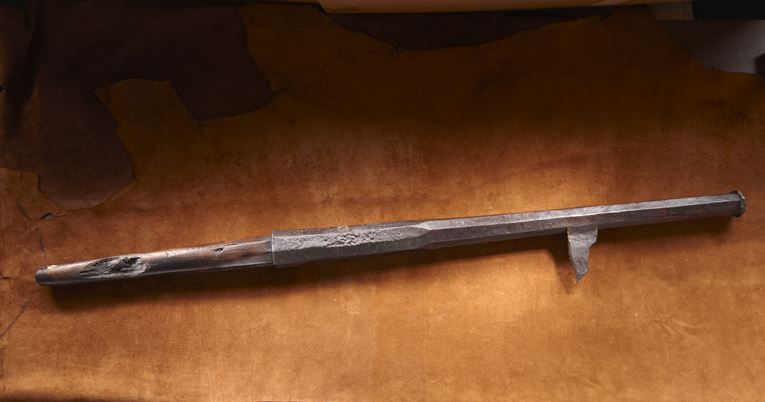 This circa-1350 hand-forged arm was once part of the Archduke Eugen collection at Salzburg Castle. Hand cannons are the earliest known hand-held firearms. The gun tube was attached to a pole and held by the user, while he or an assistant applied a slow match to the touch hole to ignite the black powder propellant charge. Lacking standard ammunition, hand cannons were typically loaded with stones, nails, or other suitable projectiles.


Late 14th Century West European Martial Hand Cannon (single shot/ muzzle loading/ black powder/ ball/shot ammunition). The technology that made hand cannons possible came from China, with the invention of rockets and firecrackers. Such technology would spread westward for several hundred years. This ancient hand cannon has a touch-hole ignited, smooth-bore barrel. Its date of origin ranges around 1350. Hand cannons were inexpensive to manufacture, but not accurate to fire. Nevertheless, they were employed for their shock value. In 1492 Columbus carried one on his discovery exploration to the Americas. Conquistadors Hernando Cortez and Francisco Pizzaro also used them, in 1519 and 1533, during their respective conquests and colonization of Mexico and Peru. Not primary arms of war, hand cannons were adequate tools of protection for fighting men. -- Dr. William L. Roberts, THE AMERICAN LIBERTY COLLECTION; #1