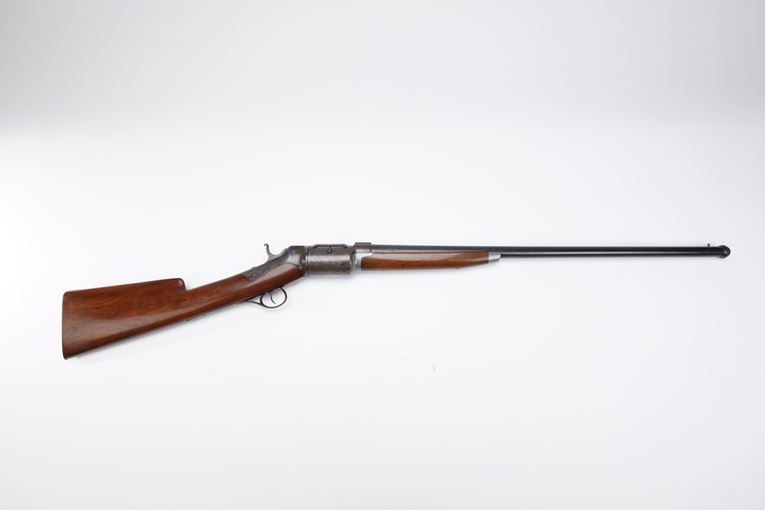 All known examples of the Roper revolving magazine shotgun have their barrels threaded for a detachable choke.


1867 Roper (U.S.) Cylinder Shotgun (repeating/ breech-loading/ black powder/ cartridge shot ammunition) Made at Amherst, Massachusetts in 1867, this arm uses four cartridges that fit into a revolving housing. Incredibly, all the basic movements of a 20th Century machine gun are present in this system. Its bolt, when moving to the rear, cocks the gun, withdraws a spent cartridge from the breech, and revolves the housing to bring a new cartridge into battery.

The now forward-moving bolt then injects the new cartridge into the breech, and the gun is ready for firing. True machine guns use propellant gasses to cycle the bolt. Instead, the gas is vented, and the shooter's thumb must provide the energy. Roper knew about all the physical forces that were available to operate a gun. Yet, he was not able to harness them for work. John Browning would later accomplish this feat. --Dr. William L. Roberts, THE AMERICAN LIBERTY COLLECTION; #83 The design of the Roper revolving magazine shotgun overcomes a problem common to nearly all revolving firearms.

This problem is the presence of a gap between the face of the cylinder and the breech end of the barrel. The Roper solves this problem by moving the cartridge into the end of the barrel before firing it. The operating sequence is as follows: When the hammer is cocked, the mainspring is compressed and the bolt is withdrawn from what would be a chamber in a true revolver. Withdrawing the bolt frees the cylinder to rotate under spring tension to its next position, bringing a loaded cartridge in line with the barrel. When the trigger is pulled, the hammer falls, driving the bolt ahead of it. In turn, the bolt drives the loaded cartridge forward into the barrel. When the bold is fully closed, the cartridge is discharged. Upon re-cocking the hammer, the bolt is again withdrawn, extracting the fired case from the barrel and returning it to the cylinder. Once the bolt is clear of the cylinder, the cylinder rotates to the next position. With a fresh cartridge in line with the barrel, the gun is ready to fire again.

This excessive motion at the instant of firing could be expected to disturb the shooter's aim. To compensate, the shooter could hold the hammer while releasing the trigger, then lower the hammer slowly. The hammer could then be pulled back to a middle sear stop. The loaded cartridge remains in place and the bolt is retracted sufficiently to fire the cartridge when the trigger is pulled.