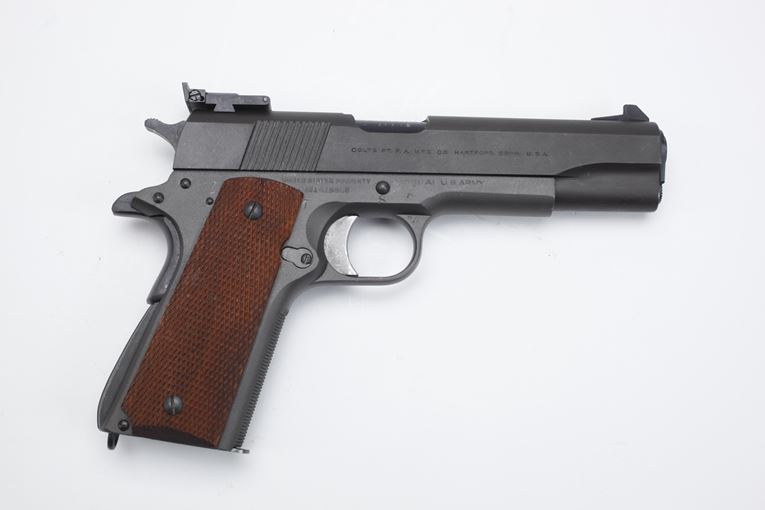 Target sights and an accurized action are trademarks of the military National Match pistol. SN 1618868

Internally, the 1955 National Match pistol's accuracy was improved by the replacement of the service barrel with a National Match barrel, the service barrel bushing with a National Match bushing and the barrel link with a special link. The replacement bushing and link served to return the barrel after recoil more precisely to the same relationship with the slide and sights for each shot. Each year thereafter, additional improvements and modifications have been made to the National Match pistol. In 1956, for example, the service front sight was replaced by one 1/8" wide and the rear sight notch was cut to 1/8". The 1957 sights were higher (.395 rear and .295 front) and the 1958 sights at .458 and .358 were higher yet.

1961 saw the introduction of an adjustable commercial rear sight in the Micro sight, which was replaced by the Elliason-type rear sight in 1963. While some National Match pistols were sold each year to National Match competitors and to others eligible to purchase from the Director of Civilian Marksmanship, those remaining in government control were generally returned to Springfield Armory each year for rebuild to new specifications. Shooters who purchased these pistols, in many cases, have had them modified to incorporate the latest improvements. Thus, early National Match pistols in their original configuration are relatively rare. The National Match pistol on display here has the milled cross-hatching on the front strap introduced in 1959, the aluminum trigger dating from 1961 and, from 1963, a commercial Colt slide, a barrel marked NM 7791414 and the Elliason-type rear sight.