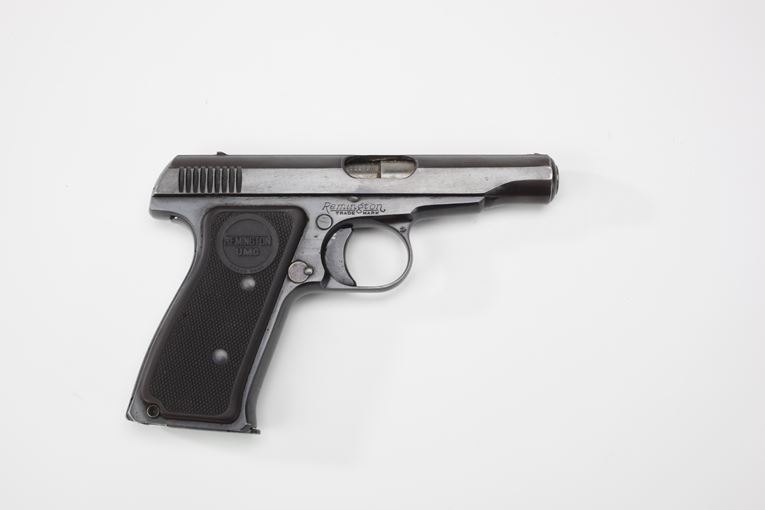 
Although the Remington Arms Company is now noted almost exclusively for its sporting rifles and shotguns, this firm once ranked among the leading producers of handguns. This held true from the mid-1800's until 1910, when the Remington Arms Co. merged with the Union Metallic Cartridge Co. After the merger, Remington left the handgun field to such competitors as Colt's and Smith & Wesson and concentrated on shoulder arms and ammunition. Only two Remington handguns were introduced after 1910. One of these, the Model XP-100 single-shot pistol, appeared in 1963.

The other was the Remington Model 51 semi-automatic, sold from 1918 to 1934. The Remington Model 51 is a hammerless (concealed-hammer) semi-automatic pocket pistol which was offered first in cal. .380 ACP and later .32 ACP. Total production was approximately 64,786 pistols. Most were made in cal. .380. Although there are no records to verify the exact date when production of the Model 51 was started, it was sometime in 1918.

Much of the Model 51's fame results from its excellent balance and specially-designed grip which positions the gun low in the hand. The grip is angled in relation to the barrel to provide a natural position of the hand and wrist, which gives the pistol excellent pointing qualities for fast and accurate shooting. Hundreds of experiments were made with hand molds to determine the correct shape, length, and pitch to provide the most nearly perfect average grip. The pistol was designed to be as flat as possible with carefully rounded corners. The action of the Model 51 is not a true blowback, but is actuated by cartridge set-back to give what is sometimes called hesitation action or impinging action. The barrel is fixed to the frame. However, the breechbolt is a separate movable part not locked to the slide or barrel. This is designed to delay slightly the opening of the action.

During firing, the cartridge case is set back about .08" by chamber pressure. This starts the rearward movement of the breechbolt and slide. The breechbolt engages a shoulder on the frame after having traveled about 3/32". The slide continues rearward, lifts the breechbolt out of its temporary engagement, and continues to compress the action spring. As the slide returns forward under pressure of the action spring during counter-recoil, it drops the breechbolt back into its locking recess in the frame. Capacity of the box magazine is seven cartridges in cal. .380 ACP and eight in cal. .32 ACP.

An additional cartridge may be carried safely in the chamber with the safety lever engaged. The 3 1/4" barrel is rifled with seven grooves, right twist. Overall length of the pistol is 5 5/8", width is .9", and weight unloaded 21 oz. There are three safety devices: A grip safety, thumb-operated safety lever on the left side of the receiver, and a magazine safety. The grip safety prevents firing unless it is depressed by grasping the pistol. It also serves as a cocking indicator by extending rearward when the hammer is cocked. If the grip safety is not depressed when the slide is pulled fully to the rear, the slide is locked open automatically.

Depressing the grip safety releases the slide which moves forward under force of the action spring. The safety lever can also be used to lock the slide to the rear by pulling the slide fully back and at the same time turning the lever upward to safe position. Unless the hammer is cocked, the safety lever cannot be put on safe. Removing the magazine causes the magazine safety to block the sear and thus prevents any cartridge remaining in the chamber from being fired. This prevents accidental firing by persons who assume that the pistol is unloaded if the magazine is removed.

A contemporary Remington catalog lists as a fourth safety feature the solid breech with enclosed hammer. This construction prevents the hammer from being released by striking it against some object or dropping the pistol. The hammer can be cocked only by rearward movement of the slide. While the Model 51 appeared only in one basic type, there were variations in slide serrations, the legend on top of the slide, and other markings. The serial number stamped on the left side of the frame has a "PA" (Pedersen's Automatic) prefix except on very early models. When the pistol was first marketed in 1919 the top of the slide was stamped with the two-line inscription: "THE REMINGTON ARMS UNION METALLIC CARTRIDGE CO, INC. REMINGTON ILION WKS. ILION, N.Y. U.S.A. PEDERSEN'S PATENTS PENDING." This inscription has been observed on a specimen as late as serial no.PA45657.

In 1925, the Model 51 could be purchased for $15.75, and was sold with a cardboard box, an instruction brochure, wiping rod, and a cleaning brush. Although the Model 51 was last produced in 1926, it still ranks among the world's finest semi-automatic pistols in design, workmanship, and reliability. - Eliphalet Remington II was born in Suffield, Connecticut on October 28, 1793. His father, Eliphalet Remington, moved his family from Connecticut to the Mohawk River Valley in 1800, where he cleared enough land for a small farm, built a two-room cabin that was later replaced by a larger home, and, along with others who had also moved to the region from Connecticut, established the town of Litchfield.

In 1888, Marcellus Hartley, a partner in the New York sporting and military goods firm of Schuyler, Hartley, and Graham, as well as the founder and owner of the Union Metallic Cartridge Company, went together with Winchester Repeating Arms Company to purchase Remington. Each partner had an equal share of the firm, which was renamed Remington Arms Co., with Hartley serving as president and Thomas Bennett of Winchester assuming the role of vice president. In 1896, Winchester sold its stake in Remington to Hartley. Marcellus Hartley died in 1902, and leadership of the company passed to Marcellus Hartley Dodge.