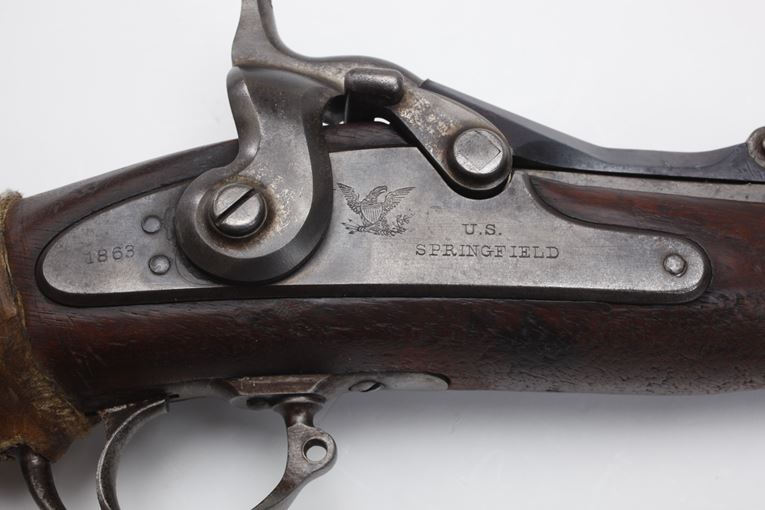 This cut-down Model 1868 rifle is associated with the Lakota Chief Kicking Bear, who fought against George Armstrong Custer's 7th Cavalry at the Battle of the Little Bighorn in June 1876. Kicking Bear was a primary leader of the Ghost Dance movement, which ended with the Army massacre of 146 Sioux at Wounded Knee, South Dakota in 1890. He also appeared in "Buffalo Bill" Cody's Wild West Show in 1891. The portrait of Kicking Bear is a print made from an original sketch. SN 9073


Kicking Bear was born circa 1846. A member of the Oglala by birth, he later became Minneconjou through marriage. He also became a chief among his new people. He took part in the battles of 1876 in which the Lakota nation, including the Oglala and Minneconjou, sought to protect their lands in the Black Hills of Dakota from white incursions.

During this period, he distinguished himself in the Battle at the Little Bighorn. He later became a leader in the Ghost Dance religious movement, in which the Indians sought to bring about a return to earlier times and to restore their ancestors, lands, and buffalo through the coming of an Indian Messiah. This movement, which alarmed the U.S. government, ended in 1890 with the massacre of many of its adherents at Wounded Knee, South Dakota after the Army attempted to disarm the Sioux. This was the last military encounter between the Army and the Indian peoples.

In the aftermath of Wounded Knee, Kicking Bear was arrested and imprisoned at Fort Sheridan. His sentence was commuted in 1891 on the condition that he join "Buffalo Bill" Cody's Wild West Show, which was then touring Europe. After a year, he returned to the Pine Ridge Reservation in South Dakota to rejoin his family. At the request of noted American artist Frederick Remington, Kicking Bear painted his account of the Battle of the Little Bighorn in 1898. In his painting, he appears alongside Lakota chiefs and warriors including Sitting Bull, Crazy Horse, and Rain in the Face.

Kicking Bear died near Manderson, South Dakota on May 28, 1904. This rifle may have come into Kicking Bear's possession as a war trophy. The steel buttplate has been removed, possibly for use as a hide scraper. A break in the wrist has been repaired with hide, a method commonly used by Plains Indians. A series of holes in the stock show where decorative tacks had once been located. Both purchased and captured arms were traditionally "tacked" by their Indian owners.