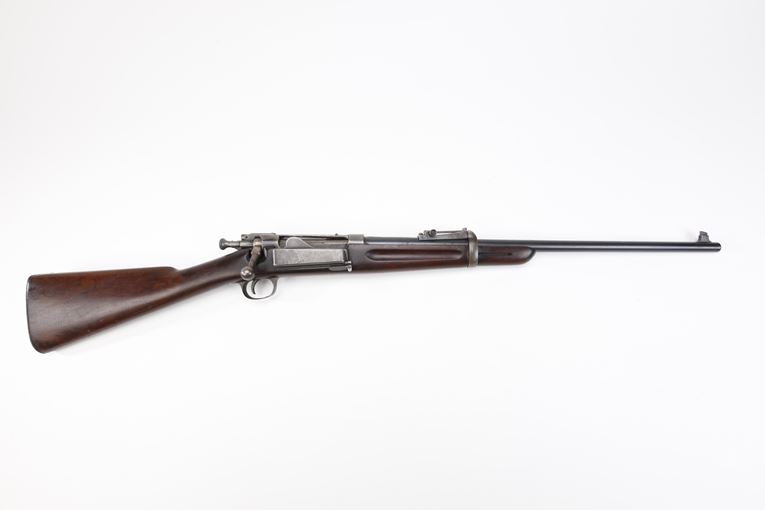 The Model 1899 Krag Carbine, which was manufactured until 1902, was the final variant of the Krag-Jorgensen rifle to be manufactured by the U.S. Armory at Springfield. Approximately 36,000 were produced before production was halted due to the adoption of the Mauser-patterned Model 1903 Springfield rifles.


Named for its inventors, Norwegian Royal Artillery officer Ole Hermann Johannes Krag and civilian Erik Jorgensen, the Krag-Jorgensen rifle was the first small-caliber smokeless power repeating long arm to be adopted by the U.S. Army. This rifle also marked the beginning of the change from large-caliber/low muzzle velocity ammunition to smaller caliber/higher energy rounds for military applications, and the demise of the Springfield socket-style bayonet, which was finally replaced by a knife-style blade. Although invented in Norway, the U.S. version was patterned after the Model 1889 rifle which was then the standard infantry arm of Denmark.

The Norwegian government did not adopt this design for its military forces until 1894. Some of these rifles continued in service with Norway's armed forces through the Second World War, long after they had been replaced elsewhere. The U.S. Army held a series of trials beginning in 1878 in hopes of finding a suitable magazine rifle that would replace the single-shot .45-70 caliber Trap Door rifles and carbines that had entered service shortly after the Civil War.

Fifty-three different models that were tested and rejected before the Army's 1892 adoption of the Krag-Jorgensen. Aside from its superiority in ordnance tests, the Krag, as it is commonly known, was extremely reliable and could easily be field-stripped and re-assembled without the need for tools. Despite its success during initial field trials, American armsmakers opposed the selection of a foreign design and successfully agitated for a second round of tests against American-made magazine arms, including the Remington-Lee, the Chaffee-Reese, and the Hotchkiss Bolt Action Rifles. Once again, the Krag emerged as the winner.

In a later effort to increase this arm's rate of fire, 200 Model 1898 Rifles and Model 1899 Carbines were modified at Springfield Armory to accept the Parkhurst Clip Loading Attachment. This modification consisted of a machined "T"-shaped steel block with guide lip that was fitted into right side of the receiver immediately behind the magazine cover for the purpose of accommodating a Mauser-type stripper clip.

This experimental alteration was later abandoned, and most modified rifles were subsequently stripped of usable parts and destroyed. In addition to military service, special Krag rifles equipped with eight groove Stevens-Pope barrels were used by the U.S. 1903 Palma Team, which defeated British marksman at their home range of Bisley to claim the international long-range championship in a match that was later protested by Britain on the grounds that the Pope barrel had not been adopted for military use. Approximately 160,000 Krag rifles and carbines were produced at Springfield Armory and Rock Island Arsenal between 1892 and 1899, and all Regular Army units were re-equipped with these arms by late 1895.

During the Spanish-American War, Krags first saw combat while serving with U.S. troops, but this conflict also brought about the combat debut of another new arm, the German-designed Mauser bolt-action repeater. Although the Krag continued in service through the Boxer Rebellion and the Philippine Insurrection, the superiority of the Mauser design eventually brought about its demise as the Army's primary-issue arm after the brief span of eleven years.

With the exception of approximately 850 .22 rimfire caliber Gallery Practice Rifles, production of the Krag-Jorgensen was discontinued after the U.S. Army's adoption of the Mauser-patterned Model 1903 Springfield rifle. Many Krags were sold as government surplus through the 1920s, including a group of modified examples sold through Benicia Arsenal to National Rifle Association members in conjunction with the office of the Director of Civilian Marksmanship. While standard military-style rifles and carbines were sold as-is through various firms including Francis Bannerman, some were later converted to sporting configurations.