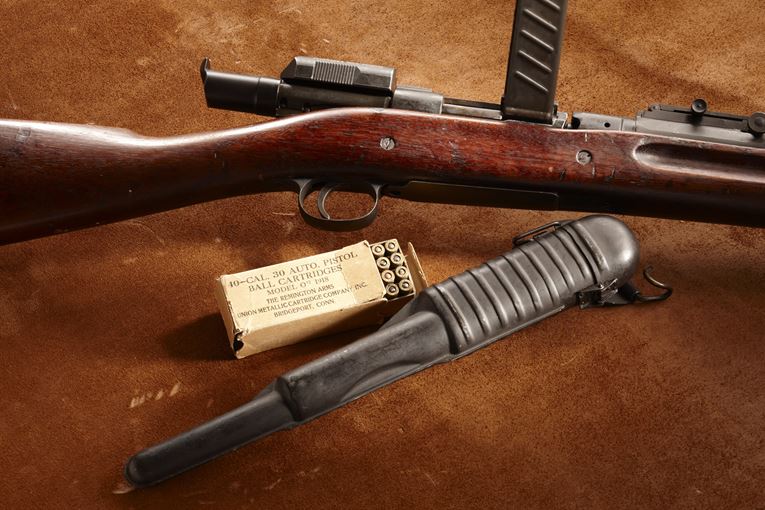 Fitted for the top-secret Pedersen Device, this bolt action rifle could be made into a semi-automatic with the addition of the conversion bolt.


The "Automatic Pistol, Caliber .30 Model of 1918," also known as the "Pedersen Device," was a top-secret attempt to convert the Army's Model 1903 Springfield rifle for semi-automatic use. Approximately 65,000 were manufactured before the end of the war, but even within the Army itself, very few officers knew of its existence. Although referred to as a pistol, in fact, the Pedersen Device was a modified blowback-action bolt that could accommodate a 40-round stick magazine that protruded from the top of the rifle's action at a 45-degree angle.

The entire bolt and magazine group could be substituted for the standard Ô03 bolt, greatly increasing the rate of fire that could be achieved with the Army's standard battle rifle. The Pedersen Device was used with .30 caliber ammunition that matched the bore of the rifle, and, when fired, propelled an 80-grain bullet at 1,300 feet per second, about half that of the .30-Ô06. Although they lacked the punch of the Army's standard rifle cartridge, this ammunition was still lethal at intermediate ranges, and the smaller, lighter, and lower-velocity projectile was much quieter than the high-power .30-06. The Pedersen Device was the invention of J. D. Pedersen, who at that time was already well-known for his work at Remington Arms.

In 1917, Pedersen requested an opportunity to secretly demonstrate a new invention that he felt would be of great interest to the War Department. His request was granted, and the demonstration took place at a District of Columbia rifle range before a limited audience. Pedersen produced a standard Springfield rifle and began shooting. Quickly, he removed the bolt, inserted his new bolt and, after locking it in place with the rifle's cut-off switch, inserted the magazine.

He then resumed firing as fast as he could pull the trigger. After emptying the magazine, he quickly inserted another, and continued firing. With each shot, the bolt cycle ejected the spent cartridge, stripped a fresh one from the magazine, loaded it, and cocked the firing mechanism. Needless to say, the military officials who witnessed the display were quite impressed. Upon closer examination, the Pedersen Device was shown to be, in essence, a firearm minus the trigger and grip. At the forward end, the unit featured a small finely-rifled barrel in the same size, shape, and length as the standard .30-06 cartridge case. This rifling did not match the rifling on the Springfield barrel, but it did impart a spin on the bullet from the moment of cartridge ignition but without affecting the way in which the bullet took the rifling grooves on the Springfield.

Some modifications to the Springfield were required, including an ejection port on the left side of the receiver, as well as modifications to the magazine cut-off, sear, and trigger. Rifles so modified were designated "Model 1903 Mark I," all of which were manufactured by Springfield Armory. The Pedersen Device was manufactured by the Remington Arms Company of Ilion, New York. The Pedersen Device could be used with any Ô03 Springfield rifle having these modifications without limiting the ability to quickly re-convert to the standard bolt and .30-Ô06 cartridge if desired. Properly-equipped soldiers could use their rifles in as-issued configuration but quickly convert to the high-capacity semi-auto to defend against enemy attacks or during offensive actions, then re-convert once again to the potent .30-Ô06.

In addition to the standard ammunition bandoleers, soldiers could be equipped with a special scabbard for the Pedersen Device, along with a canvas case for carrying five 40-round magazines. Army officials dispatched an officer to transport the unit, along with a specially-modified Springfield rifle, to France for inspection by General John Pershing. Pershing later requested the manufacture of 100,000 Pedersen Devices, along with the request that their existence remain a closely guarded secret. The secrecy surrounding this invention may explain its official designation as an automatic pistol. Production estimates projected the availability of 500,000 units by the spring of 1919, at which time they were to be used in a surprise attack against the Germans, but the war ended before they could be used in combat. Orders for the Pedersen Device were canceled after the production of 65,000 units.

After the war's end, the Army conducted extensive tests to determine the potential of the Pedersen Device. These tests determined that the unit would be extremely effective in relatively close-range warfare of the type experienced in the trenches of the recent conflict, but that at ranges over 350 yards, its accuracy and effectiveness would be limited. Its low velocity yielded a high trajectory in which the bullet could pass completely over man-sized targets at intermediate ranges when the rifle was sighted at an enemy at extreme range.

Unlike the .30-06 the Pedersen's low-power ammunition would also be useless in defending against attack by air, and its relative lack of noise, both when fired and when passing through enemy lines was viewed by the Army as lacking in positive psychological effect due to the belief that enemy troops would not have the same degree of fear as that generated by the loud crack accompanying the passage of the standard high-power cartridge. Field trials also determined that it was desirable to decrease rather than increase the amount and weight of equipment in the infantryman's combat load, and that the additional accessories required for the Pedersen Device would hinder the soldier's ability to move efficiently in the field.

In addition, Army officers believed that there was a high degree of probability that the standard Springfield bolt would be lost or thrown away in the excitement, confusion, and stress of combat. Consequently, completed Pedersen Devices were placed into storage, and their existence remained a secret until 1931, by which time the Army was investigating the Pedersen and Garand semi-automatic rifles as a replacement for the bolt-action M1903. These developments eliminated any remaining advantages of the Pedersen Device. Almost all of them were destroyed by the government, and Mark I-modified 03 Springfields were reconverted to their original configuration.