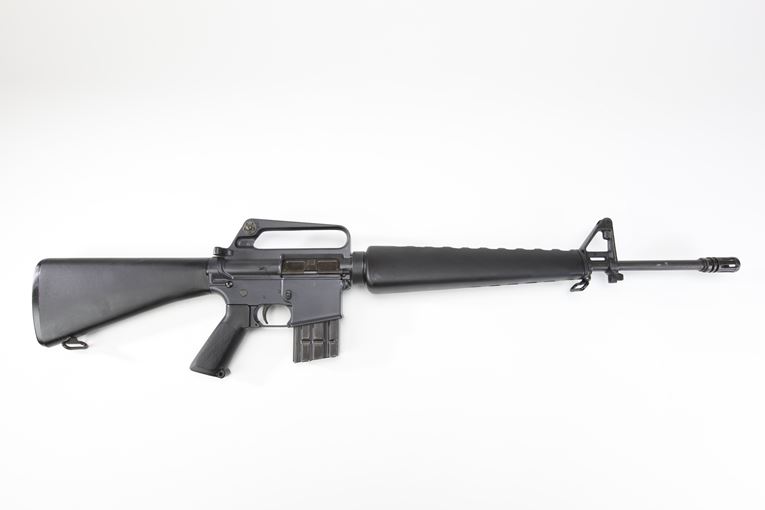 During the Vietnam conflict, controversy regarding the combat inadequacies of the M16 rifle resulted in minor design revisions and major ammunition and training changes. As originally issued, the M16 rifles did not come with cleaning equipment and soldiers that received this arm were told that the design did not require maintenance. Under tropical conditions, issue ammunition caused massive fouling in this design, resulting in stoppages. Throughout the Vietnam conflict, many soldiers requested supplemental cleaning equipment from home to maintain their ri6fles.


1962 Colt Firearms (U.S.) AR-15 Semi-automatic Detachable Magazine Rifle (repeater/ breech-loading/ smokeless powder/ cartridge ammunition) Motivated by fear of communism, the United States expanded its role in the Vietnam conflict. During December, 1959, Colt Firearms obtained the manufacturing and marketing rights to the AR-15, a gas-assisted rifle designed by Armalite. Modified for U.S. Army use, Colt was able to get the Department of Defense to test these .223 caliber guns in Vietnam beginning in 1962. After further improvements, the AR-15/ M-16 selective-fire rifle became the basic shoulder arm for the U.S. military. It also became the only U.S. military arm to be placed in combat prior to extensive trials and peacetime use.

Despite early problems, the M-16 eventually performed reliably in a very difficult environment. --Dr. William L. Roberts, THE AMERICAN LIBERTY COLLECTION; #157 The ArmaLite Division of Fairchild Engine and Airplane Corporation traces its origins to to the efforts of two men who sought to design a military-style rifle that represented a radical departure traditional from its predecessors.

In the early 1950s, engineer/attorney George Sullivan teamed with inventor Jacques Michault to create prototype rifles that featured lightweight aluminum receivers, straight-line fiberglass stocks, high-line sights, and receiver-mounted carrying handles. Sullivan later met with Richard S. Boutelle, president of Fairchild, and told him of his efforts. Boutelle was interested in this project, and as a result, ArmaLite was founded as a Fairchild subsidiary in 1954. Eugene Stoner, a former U.S. Marine and ordnance technician, became ArmaLite's chief engineer. Stoner, along with designer L. James Sullivan and supervisor Robert Fremont, were instrumental in determining the course and success of the company. ArmaLite's charter required it to develop and perfect prototype designs that would then be licensed to manufacturers for actual production.

The company's first products, the AR-1 and AR-3, never entered production, but they did prove the feasibility of concepts that made use of modern designs and materials. ArmaLite's first success came in 1957 with the design of the AR-5. This rifle was a bolt-action breakdown rifle chambered for the .22 Hornet cartridge and was intended for use as a survival arm by U.S. Air Force crews. The gun's barrel and receiver could be stored in its hollow fiberglass buttstock that, in addition to its ability to float, also provided a storage place for fish hooks, matches, and other supplies.

The AR-5 was accepted for military use, but expected sales failed to materialize because the Air Force had already purchased a large inventory of Harrington & Richardson M4 and M6 survival guns. The AR-5's design became the basis of the civilian AR-7. The gun was chambered for the popular .22 long rifle cartridge and employed a semi-automatic blowback action rather than the bolt operation of its predecessor. ArmaLite briefly manufactured the AR-7 before selling production rights to Charter Arms Corporation. This company manufactured the AR-7 until 1990, when Survival Arms, Inc. took over production under license from Charter Arms/Charco.

Not all of ArmaLite's designs were rifles. The AR-9, which dates from 1955, was a semi-automatic shotgun that featured a polycarbonate stock and an anodized aluminum barrel and receiver. The AR-9 was not produced, but many of its features were incorporated into the AR-17 "Golden Gun", a two-cartridge gun that met with limited success. Other ArmaLite rifles were intended for use by military and police forces. The most famous of these are the AR-10 and AR-15 rifles. The AR-10's development dates to 1953, when inventor Melvin M. Johnson, Jr. was employed by the company as a consultant. Prior to the Second World War, Johnson, a U.S. Marine Corps officer, invented a military rifle that later saw success with the Marines in the jungles of the Pacific.

The Johnson semiautomatic rifle and the Johnson Light Machine Gun employed a cam-controlled rotary bolt, a feature that was incorporated into the AR-10. The AR-10 also used a simplified gas system that had been proven in the Swedish Ljungman Gevar 42 and French MAS rifles. One notable feature of the AR-10's design was its high stock, which channeled recoil forces backward rather than upward. This design, as well as the AR-10's effective titanium muzzle brake, made the rifle easy to control when fired in the fully-automatic mode.

Between 1956 and 1959, ArmaLite engineers developed a scaled-down version of the AR-10, with many of the same features. Generally credited to Eugene Stoner, the new AR-15 actually incorporated design features that pre-dated Stoner's tenure with the company. This rifle used the same recoil and gas systems as its larger cousin, but its smaller size presented special challenges. The AR-15 chambered a specially-developed .222 Remington magnum caliber cartridge, which later became the now-standard .223 caliber/5.56mm NATO round. This cartridge produced higher gas pressures in its smaller chamber than did the larger 7.62mm round. In addition, the .223 had a flatter trajectory than the 7.62. ArmaLite engineers had to make provisions in their designs to accommodate both of these characteristics with modifications to the gas system and sights.

In 1958, the AR-15 was tested by the Army as a possible replacement for the M14. Although the new rifle performed well, the Army would go no farther than to suggest the need to develop a reliable light-weight rifle like the AR-15 as an eventual replacement for larger infantry arms. Several design changes came out of these tests, including the addition of a stronger barrel with a two-piece handguard, relocation of the cocking lever from under the top carry handle to the rear of the receiver, modification of the "safe" switch, reduction of magazine capacity from 25 to 20 rounds, and an increasing of receiver and magazine clearances and feed ramp modification for better reliability under combat conditions.

Convinced that the military would not adopt the AR-15 and faced with financial problems, ArmaLite sold the production rights for the rifle to Colt Industries in 1959. With the help of Eugene Stoner, Colt began aggressive marketing of the AR-15 to nations throughout Asia, and these efforts met with immediate success. Unfortunately, U.S. aid to these nations required them to purchase firearms that were compatible with those used by U.S. forces. Fairchild president Richard Boutelle enjoyed a close personal friendship with U.S.

Air Force general Curtis LeMay, and as a result of an impromptu demonstration during a skeet shooting session, LeMay became interested in testing the AR-15 for possible use by Air Force security personnel. Testing at both Lackland Air Force Base and at the Army's Aberdeen Proving Grounds showed the AR-15 to be a formidable infantry arm. Army special unit field tests in Vietnam confirmed this finding, and in 1962, Congress approved an initial purchase of 8,500 AR-15s. The AR-15 still faced challenges from Army brass and from ammunition and maintenance-related "bugs" that were later worked out, but the "black rifle" went on to prove itself in Southeast Asia and in other conflicts around the world.

The AR-15, later designated the M16, has seen additional modifications and variations over its nearly forty year lifespan, and is currently produced both by Colt and by various licensed companies around the world. Several million AR-15/M16s have been produced. This rifle's success has spurred the development of both clones and other small caliber/high velocity combat arms. In addition to its widespread acceptance among the world's military forces, the AR-15 is also a favorite with both law enforcement agencies and with competitive shooters. ArmaLite was purchased by a Philippine conglomerate, but the company name and trademarks were in turn purchased by Eagle Arms, Inc. of Geneseo, Illinois.