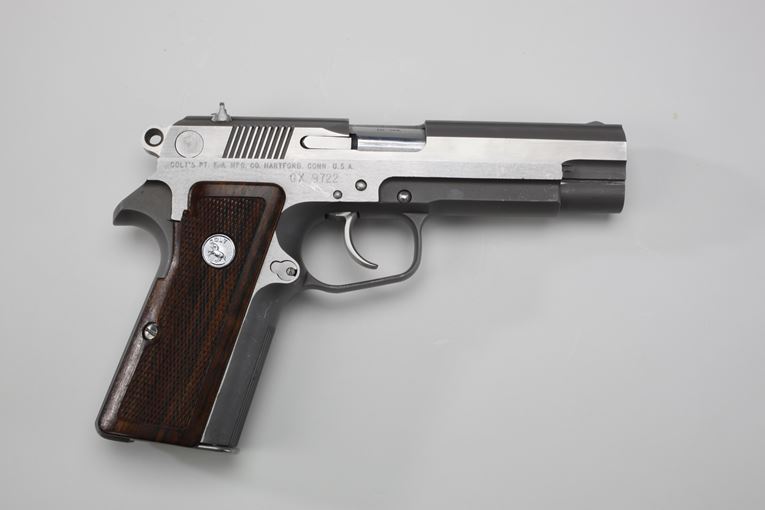 The Colt Stainless Steel Pistol is an experimental double-action pistol which borrows features from the Petter-designed French M1935A and Swiss SP44/16. Its removable fire-control mechanism can be lifted out the top of the receiver for repair or replacement, and it field strips without tools.


The Colt test pistol is a stainless steel, double-action design with 14-shot magazine capacity, designated SSP, (Stainless Steel Pistol). Designed by Robert E. Roy, its development started in the late 1960s. The SSP has the same approximate size and shape of the M1911A1, but its mechanism resembles the French M1935A or the Neuhausen SP44/16 which later became the P210. Like the Petter-designed M1935A and P210 pistols, the SSP slide moves on rails which are integral with the receiver. It also has a readily removable fire control mechanism which contains the hammer, mainspring assembly and sear.

This can be pulled out the top of the receiver for repair or replacement. The fire-control mechanism is an improvement over the original Petter design and is described fully in U.S. Patent 3,682,040, dated Aug 8, 1972. The top of the slide is matted, and the trigger guard is large and squared to provide support for a two-handed hold. The SSP does away with the separate barrel bushing and barrel link of the M1911A1. There is no grip safety, and the receiver tang is integral with the frame. Takedown is simple, requiring only that the magazine be removed and the disassembly lever on the left side of the receiver rotated so the slide assembly can be pulled forward off the frame.