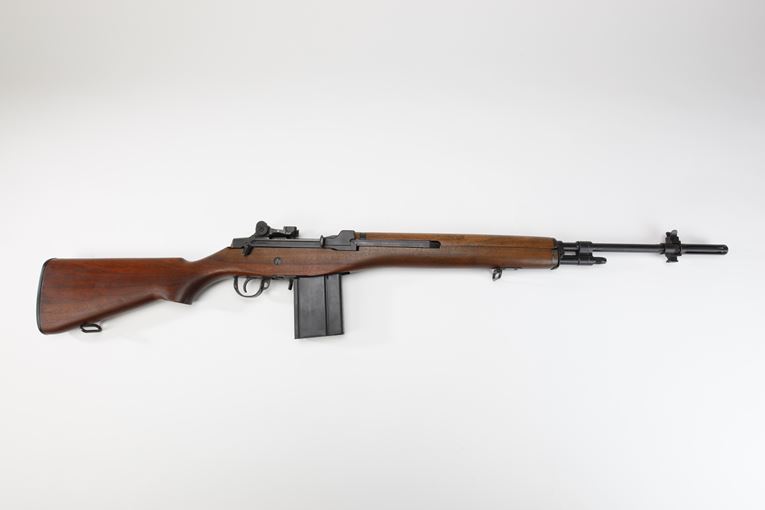 Eventually adopted by the U.S. Department of Defense under the designation "M14", this selective-fire rifle was tested by the Army in 1957 as an all-purpose infantry arm intended to replace the M1 Garand rifle, M3 submachine gun and M1/M2 carbine. Production versions were manufactured by Harrington & Richardson, Winchester, and Springfield Armory. SN 1200


John Cantius Garand was born on New Year's Day, 1888 in St. Remi, Quebec, Canada. After spending his early years in Canada, he moved with his family to Connecticut. Showing great mechanical aptitude from an early age, he designed and patented a screw jack at the age of 14; by his nineteenth birthday, Garand was working as a machinist. As his career progressed, he gained experience in tool and gauge making and design. Garand was also an accomplished marksman. On one occasion, it is said that he spent over $100 in a single day at the shooting galleries of Coney Island.

By 1925, Garand had worked out many of the problems facing this new rifle, but a change in the design of the Army's .30-06 cartridge made Garand's primer-activated system unworkable. Undaunted, he re-designed his rifle to be gas-operated. Additional challenges were posed when the Army abandoned the .30-06 in favor of the .276 cartridge; Garand adapted his design to work with the new round, and in 1929, this design was the winner in Army acceptance trials. Instead of entering production, Garand's rifle faced yet another obstacle, as Army Chief of Staff Douglas MacArthur insisted that the .30-06 be retained. Once again, Garand returned to his workshop and changed the design for use with the heavier cartridge.

On January 9, 1936, the "U.S. Rifle, Caliber .30 M1" was adopted by the Army as its new battle rifle. The Marine Corps followed suit in November, 1941, based at least in part on the rifle's favorable performance on Guadalcanal. Garand's original design was not without its share of problems. Most notable among these was a load failure with the seventh cartridge contained in the 8-round en bloc clip, a tendency to eject the clip with one round remaining, and an operating rod malfunction caused by prolonged exposure to rain. All of these were solved through minor improvements prior to the outbreak of the Second World War. Original production M1s utilized a gas-trap actuator. This was changed to a gas-port system in 1940. Eventually, these early production rifles were converted to the new system during normal ordnance maintenance and rebuild cycles, but some did see service in the Philippines during the early days of the war.

Other changes included the use of a compartment in the buttstock for storage of cleaning supplies, and improved sights. M1 variants include the M1C and M1D sniper rifles. Initial production was limited to Springfield Armory, and by the end of the war, nearly three and one-half million M1s had been produced in its shops. By mid-1943, Springfield's output topped 4,000 rifles each day. Winchester Repeating Arms accounted for over 500,000 more. With the conclusion of hostilities, Winchester's M1 production lines were shut down, and Springfield concentrated on rebuilding surviving service rifles.

Production resumed during the Korean War, when nearly one million M1s were manufactured by Springfield Armory, Harrington & Richardson, and International Harvester. Production of the M1 ended in 1957. The United States was the only nation to issue a semi-automatic rifle as a standard infantry arm during the Second World War, and the Garand's firepower proved to be a decisive factor in combat. The M1 proved to be rugged, dependable, and accurate, and it was also easy to strip and maintain in the field. M1s saw service in all theaters of the war and in extreme climates from the deserts of North Africa and the jungles of the Pacific to the frozen forests of Belgium and Germany.

Although initially viewed with suspicion by the soldiers to whom it was issued, the rifle proved itself time and again to be superior to any other infantry long arm up to that time. In fact, General George S. Patton called the M1 ". . . the greatest battle implement ever devised." General Douglas MacArthur added, "The Garand rifle . . . is one of the greatest contributions to our armed forces." Garand received many awards for his rifle, the highest of which came in March, 1944, when he was presented with the Civilian Medal of Honor for "exceptionally meritorious service to his country." He continued his work at Springfield Armory until his retirement in 1953, after 34 years of service. The M1's successor, the selectable-fire M14, was based on his earlier design.

All told, he held fifty-four firearms-related patents, all of which were signed over to the government, with no additional compensation paid to Garand other than his salary. John Garand died in Springfield, Massachusetts in 1974 at the age of 86. The town of Springfield, Massachusetts, located on the banks of the Connecticut River, was settled in 1636 by emigrants from Roxbury. The town was nearly destroyed during King Philip's War in 1675, but it was quickly rebuilt. As early as 1776, Continental Army colonel and future Secretary of War Henry Knox recommended the establishment of public laboratories, magazines, arsenals and foundries in secure locations for the production and repair of arms, ammunition, and other ordnance stores.

Both George Washington and the Continental Congress concurred with this recommendation, under which an ordnance depot was established at Springfield in 1777. The town's access to raw materials, sources of water power, and transportation, as well as its inland location which provided security against seaborne attack, made Springfield an ideal location. Over the following year, buildings were rented or erected for use as barracks and storehouses. In addition to ordnance stores, the depot at Springfield also handled other aspects of army supply, including equipment, uniforms, tents, food, and fuel. The end of the War for Independence also brought a decline in military activities at Springfield. In 1794, an Act of Congress directed that national armories be established for the fabrication of small arms. President Washington selected Springfield and Harpers Ferry, which was then located in Virginia, as the sites for these facilities.

Model 1861 and 1863 rifle-muskets, which were based on a modification of the earlier Model 1855, were produced in great quantities throughout the Civil War. These were the last muzzle loading, paper cartridge percussion arms to be produced by the U.S. Erskine S. Allin, Springfield's Master Armorer, designed a method for converting many of these into metallic cartridge breech loaders. This conversion consisted of a modification to the breech to permit the installation of a "trap door" breechblock with a self-contained firing pin. The famous .45-70 government caliber "trap door" Springfield rifles and carbines of the Plains Indian Wars were based on Allin's work, and these accounted for much of the Armory's production during the 1870s and 1880s. Springfield Armory was also involved in improving the state of the art in military rifle design, and toward this end, limited-production long arms including the Ward-Burton, Lee Vertical Action, Hotchkiss, and Chaffee-Reese rifles were manufactured there.

These efforts culminated in the 1890s with the Army's adoption of the smokeless powder Krag-Jorgensen bolt-action repeating rifle as its standard longarm. These rifles, as well as carbine versions, were manufactured at the Armory through the turn of the century. The Spanish-American War proved the superiority of the German-designed Mauser, and the .30-'06 caliber U.S. Model 1903 bolt-action rifle, which was built at Springfield Armory and Rock Island Arsenal under a license from Mauser, replaced the Krag-Jorgensen as the Army's new standard rifle. Over one million were manufactured before production was discontinued in 1941, and many of these, as well as rebuilt or contract model Ô03s, saw action in both World Wars.

Prior to the First World War, Springfield also manufactured the M1911 .45 caliber semi-automatic pistol under license from Colt, and throughout this period, Armory workers continued to experiment with, produce, test, and maintain various other ordnance materiel including rifles, pistols, machine guns, and related equipment. During the interwar years, John Garand, a Canadian-born design engineer and Springfield Armory employee, worked on a design for a new gas-operated semi-automatic rifle.

After overcoming several problems, both with his designs and with Army brass, the U.S. Rifle .30 caliber M1 was adopted by the Army in 1936. The Marine Corps followed suit, and during the Second World War, over three and one-half million M1s were produced at Springfield. An additional 500,000 were manufactured by Winchester Repeating Arms Co. This rifle, which General George S. Patton called, "the greatest battle implement ever devised," gave American troops a significant edge over their German and Japanese enemies, most of whom were still equipped with bolt-action arms. After the war, Springfield ceased manufacture of the M1 and turned its efforts to the overhaul and long-term storage of these rifles.

The outbreak of war in Korea in 1950 caused a resumption in production at the Armory, as well as by International Harvester and Harrington & Richardson. The return of peace brought a second and final discontinuation of M1 production. Springfield Armory's continuing efforts at advancing military rifle designs yielded a series of improvements to the M1, culminating in production of the 7.62mm NATO caliber selective-fire M14 rifle, which replaced the Garand in the Army's inventory. In 1968, the Ordnance Department ceased operations at Springfield Armory. The Armory grounds, buildings, and museum, with its extensive arms and accouterments collection, have become Springfield Armory National Historic Site and are now maintained by the National Park Service.