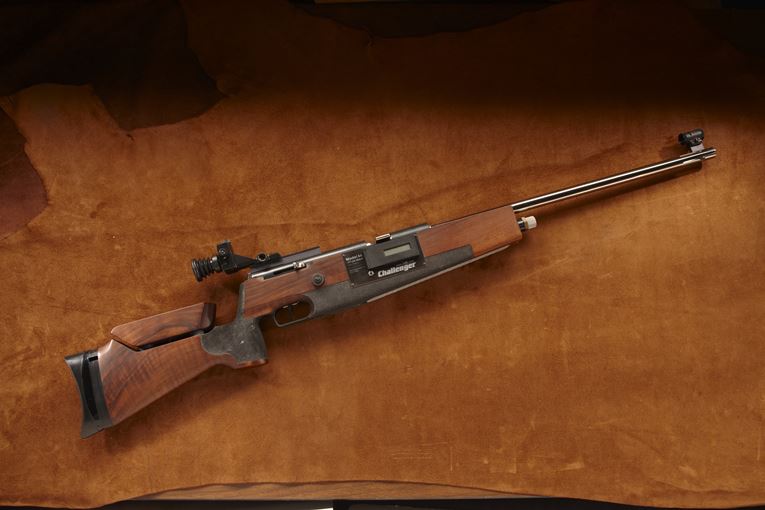 This competition grade air rifle, introduced by Crosman in conjunction with the Los Angeles Olympics, was given to President George H. W. Bush by the Crosman company in recognition of his service to the outdoor shooting sports.


George Herbert Walker Bush, the son of investment banker and U.S. Senator Prescott Bush, was born in the Boston suburb of Milton, Massachusetts on June 12, 1924.  A graduate of Phillips Andover Academy, Bush enlisted in the U.S. Navy on his 18th birthday and went on to  serve as an aviator in the Pacific during the Second World War, earning distinction as the Navy's youngest pilot when he received his wings.   He flew over 50 combat missions,  narrowly escaped death when his torpedo bomber was shot down by Japanese anti-aircraft gunners, and won the Distinguished Flying Cross for bravery in action.

In January 1945, he married Barbara Pierce.  He also attended Yale University, where he excelled both on the athletic field as captain of the baseball team and in the classroom, becoming a member of Phi Beta Kappa.  Bush later relocated his family to Texas, where he became involved in the petroleum industry.

Although establishing a lifelong residency in the Lone Star State, Bush remained committed to the values of his Episcopalian upbringing, and his Ivy League connections helped him in his business ventures.  In 1964, he turned to a career in the political arena, but was unsuccessful in his bid for the Senate.  Two years later, he was elected to the first of his two terms in the U.S. House of Representatives.  Bush again ran unsuccessfully for the Senate in 1970 before serving the Nixon Administration as U.S. Ambassador to the United Nations.  He later became chairman of the Republican National Committee during the Watergate scandal.  During Gerald Ford's presidency, Bush represented the United States as Chief of the U.S. Liaison Office in the People's Republic of China, where he established a relationship with the ruling communist hierarchy of that country.  He returned home and became Director of the Central Intelligence Agency, whose headquarters building was re-named in his honor in 1999.

In 1980, Bush sought the Republican nomination for president, but lost that honor to Ronald Reagan.  Bush was selected for the second spot on the ticket and served two terms as vice president under the popular Reagan.  Bush was able to establish himself as the heir to Reagan's legacy and succeeded to the presidency in 1988.   As president, Bush continued many of the policies established under Reagan, but he was also faced with a dramatically-changed world in the aftermath of the collapse of the Soviet Union and the communist governments of eastern Europe.

He dispatched U.S. troops to Panama  to restore democracy and to arrest Panamanian strongman General Manuel Noriega for his role in drug trafficking between South America and the United States.  Bush's greatest challenge came in 1991, when Iraqi dictator Saddam Hussein invaded and pillaged neighboring Kuwait.  Bush vowed to liberate the tiny Persian Gulf nation and rallied Congress, the American people, and the United Nations to this cause.  His efforts resulted in the formation of a multi-national military coalition including the U.S. and its allies, as well as troops from the Arab world.  A prolonged build-up of troops in the region preceded a sustained air campaign and a subsequent lightning ground war which destroyed much of the Iraqi Army in less than a week.

Unable to sustain the high public approval ratings that followed his military triumph in the desert, Bush was unsuccessful in his 1992 bid for re-election.   The Crosman Arms Company of East Bloomfield, New York is the world's largest manufacturer of pneumatic and CO2 guns.  The company was founded in 1925 by members of the Crosman family, who also owned Crosman Seed Co. of Rochester.  Crosman's first product was a pump compressed air gun designed by William McLean, the family chauffeur.

Philip Y. Hahn, who was related to Crosman family by marriage, joined the company at its incorporation.  He remained with Crosman until 1930, when he left over differences in opinion regarding company policies.  Production was limited during the Great Depression, and Hahn purchased the company in 1940 for $5,000.  Due to the demands of a wartime economy, manufacture of air guns was nearly impossible during the Second World War, but the government's Office of Strategic Services purchased 2,000 compressed air guns for unspecified purposes, quite possibly for covert use by O.S.S. agents.  Hahn and Rudolf Merz, a Swiss engineer, worked with whatever they had to fill this order.  From this beginning, Crosman grew to become dominant in the airgun industry.

In the post-war years, Hahn foresaw the growth of short-range low-cost target shooting in the U.S., both for recreational and training purposes.  His vision and energy poised Crosman to take advantage of this emerging market.  Hahn was willing to finance improvements that would improve his company's position.  Crosman was able to develop and efficiently produce inexpensive guns, and Hahn's sales knowledge brought an aggressive marketing program.  Crosman also established a series of repair stations across the country.  Staffed by Crosman-trained technicians and stocked with Crosman parts, provides ability to repair guns at set prices.  Crosman has also been active in developing shooting programs through groups such as the American Legion, the National Rifle Association, and other civic and recreational organizations.  These factors combined to fuel the growing market for air guns that Hahn had foreseen so clearly.

While Crosman has produced compressed-air guns since its inception, the company's greatest profits have come from the manufacture and sale of CO2 pistols and rifles.  Hahn was quick to recognize the advantages of pneumatic designs over the spring designs of European manufacturers.  As a propellant source, pneumatic guns make use of air that is already compressed and stored in a reservoir, ready to be released when the trigger is pulled.  Spring guns, on the other hand, compress air through the movement of a spring-driven piston that is released by the trigger.

Velocity that may be achieved in spring designs is generally limited to 600 feet per second, while pneumatic guns may be pumped multiple times to increase pressure in their air reservoir, which in turn yields higher velocity.  As a result of this important difference, pneumatic guns are more powerful than spring guns, but their limited range makes them suitable for use in areas where safety is a paramount concern due to population density.  Pneumatic guns have one significant disadvantage, especially for young shooters, in that significant strength is often required to pump several strokes into the reservoir.

Hahn seized upon Paul Giffard's idea of using a compressed gas cylinder as a propellant source, thus requiring only minimal physical effort to load and cock the gun.  This met with enthusiasm among Crosman employees.  Word leaked out, however, and the Schimel pistol actually reached the market before Crosman's design; however, Crosman was the first company to produce a modern CO2 rifle.  Crosman's original compressed air guns used surplus military gas cylinders that could be refilled at gas stations, as well as designs which utilized a large detachable liquid gas cylinder.  Later designs featured the now-familiar low-cost non-refillable tubes available at drug and hardware stores.

In addition to expansion of its production facilities, Crosman has also grown through the acquisition of competing companies.  The first of these competitors to be purchased was the Kessler Company.  Organized in Rochester, New York by local businessmen who had sought unsuccessfully to purchase Crosman, Kessler's primary business philosophy was to manufacture guns that sacrificed quality for low cost.  Kessler eventually went bankrupt and was purchased by Crosman.  Some former Kessler equipment, including a high-speed stocking machine, allowed Crosman to further increase efficiency and reduce costs.  In recent years, Crosman has purchased former competitors Benjamin and Sheridan.  Under Crosman's ownership, the surviving product lines of these two companies have been merged.  Crosman has also entered into cooperative ventures with European firms Anschutz rifles.