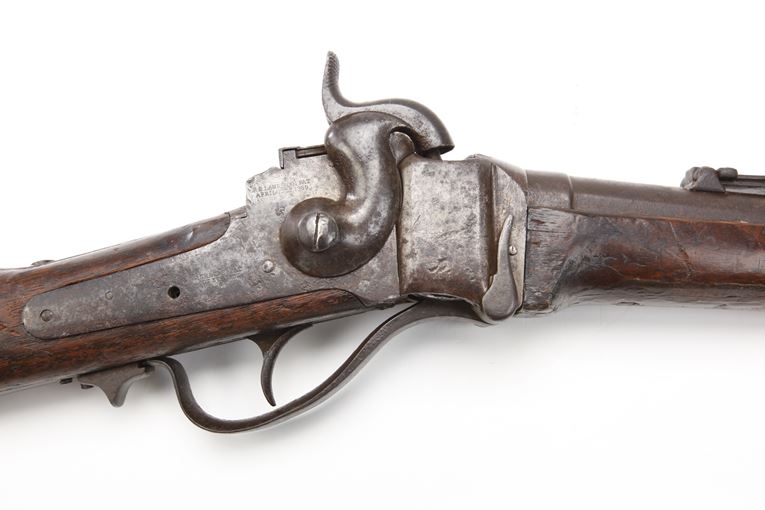 The buttstock of this carbine is carved "Rappahannock Station Nov. 7 1863" and was captured from Confederate cavalry forces by Union General John Buford's troopers at that battle. Rappahannock Station is known today as Remington, Virginia. SN 45479.


Sharps carbines were produced in Hartford, Connecticut, and issued to Federal soldiers. Although the Confederates made copies of these guns, these were few in number and of lesser quality than the original arms after which they were patterned. Two thousand Sharps-manufactured carbines were purchased for use by Georgia troops shortly before the outbreak of the Civil War, but most carbines of this type which saw service with Southern troops were captured in battle. Factory records and ordnance returns indicate that the Sharps New Model Carbine seen here was initially issued to a member of the 1st Massachusetts Cavalry, and was most likely captured by Confederate cavalrymen at Aldie, Virginia in early 1863.

The buttstock bears the carving, "Rappahannock Station Nov. 7 1863", indicating that it was recaptured from Confederate cavalry forces by Union General John Buford's troopers during that battle. Christian Sharps (1811-1874) was the originator of a line of sturdy, practical, and popular military and sporting rifles and handguns that were associated with several events that shaped American history in 19th century, including armed conflict in Kansas during the 1850s, the Civil War, the era of the Plains buffalo hunter, and the rise of modern long-range competition shooting during the 1870s.

Christian Sharps served as technical advisor to the Sharps Rifle Manufacturing Company, receiving royalties on the manufacture of their firearms. His relationship with the company was a rocky one, and in 1853, Sharps severed all connections with the firm. There is no evidence that he ever had any further association with the company that continued to bear his name. In 1855, the Sharps company introduced the Model 1855 Carbine. These arms retained the slanting breech and buttstock patch boxes of earlier models, but featured the Maynard tape primer system. Approximately 800 .54 caliber carbines were manufactured for the U.S. government, and an additional 6,000 Model 1855s in .577 caliber were purchased by Great Britain. While these carbines were in production, both Robbins & Lawrence and Sharps suffered serious financial losses. The latter corporation went bankrupt, and their operations were taken over by Sharps and moved to Hartford.