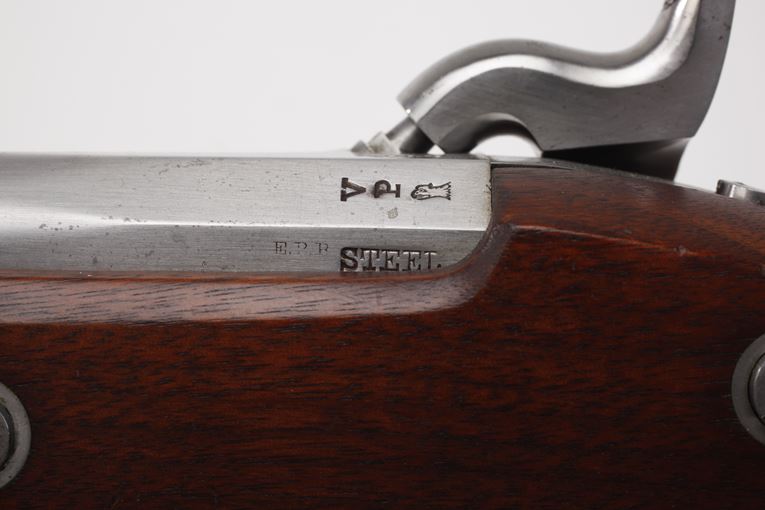 Colt Special Model 1861 Contract Rifles were produced throughtout the Civil War period. Colt contracts with Federal and state governments resulted in the production of approximately 100,000 muskets. Although Colt was the largest single manufacturer of these arms, other contractors, including Amoskeag and E. G. Lamson, produced an additional 50,000 Model 1861 Contract Rifles.


Colt Model 1861 Special Muskets were produced throughtout the Civil War period. Colt contracts with Federal and state governments resulted in the manufacture of approximately 100,000 muskets. These arms had some features common to the British Enfield rifle-muskets that were widely imported during the War. Among these were the S-shaped hammer (later adopted for the U.S. Model 1863 Rifle-Musket), and the use of screws rather than springs to secure the barrel bands. The general shape of the stock, the .58 caliber bore, and the short-base three-leaf rear sight were all similar to those of the U.S. Model 1861 Rifle-Musket.

Although Colt was the largest single manufacturer of these arms, other contractors, including Amoskeag and E. G. Lamson, produced an additional 50,000 Model 1861 Special Muskets. Samuel Colt was born in Hartford, Connecticut on July 19, 1814. He showed an early fascination with science, and during his youth, Colt studied both chemistry and mechanics. While still a boy, he attempted to produce a pistol that was capable of firing multiple shots without reloading, but his efforts were unsuccessful.

In failing health, Colt expanded his factory on the eve of the Civil War, and began production of a new, lightweight .44 caliber Army revolver, followed a year later by a .36 caliber Navy version. Samuel Colt died in Hartford on January 10, 1862 at the age of 47.

Although he did not see the end of the Civil War, his products played an important role in its outcome. During the war, the Hartford factory produced revolvers, as well as the Colt Special Musket, based on the government's Springfield Rifle-Musket. The Model 1860 Army revolver was the primary issue revolver for U.S. troops, while other Colt revolvers were acquired through private purchase. The Colt Special Musket was issued to state troops, and the Model 1855 Revolving Rifle saw service with both Union infantry and cavalry, as well as with Colonel Hiram Berdan's United States Sharp Shooters.