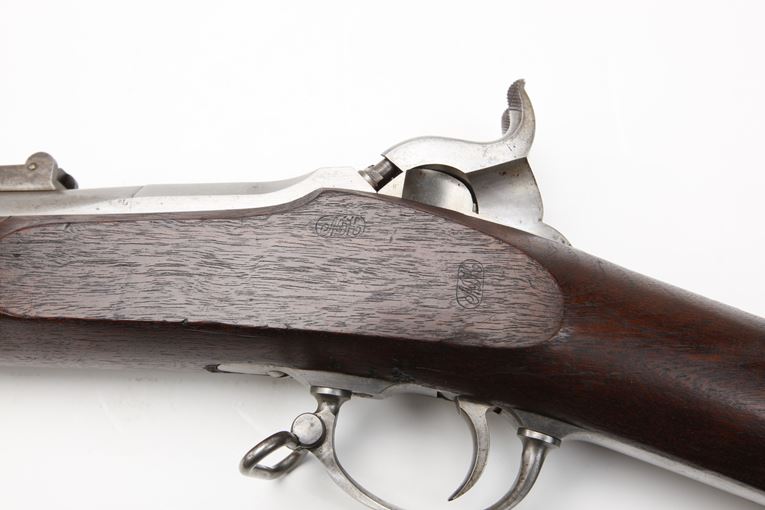 This superimposed charge muzzleloader was capable of firing two shots instead of the usual single load used with the standard Union rifle musket. The two hammers were intended to be engaged by a single trigger, with the right hammer being the first to fall. Only 1,000 of the Lindsay double rifle muskets were manufactured and the 16th Michigan Infantry is the only unit known to have been issued this arm.


While only a thousand Lindsay superposed load rifle muskets were ever manufactured, this New York-built longarm received widespread contemporary acknowledgement as one of the American Civil War's least-favored arms.

The Lindsay's unusual design called for two full charges to be loaded, one load atop the other, and ignition of the charges came from twin side-by-side hammers that rested on two percussion cones. Despite having two hammers, the Lindsay had only one trigger and one barrel. For size and weight, the two-shot Lindsay was very close to the Federal issue single-shot rifle muskets produced by many contractors.

J.P. Lindsay, inventor of this musket and some similar handguns, had experienced tragedy when his brother was killed and scalped. While Lindsay's brother was able to kill one of his two attackers with his single-shot musket, the second attacker was able to overcome the now defenseless man. Lindsay always felt that a two-shot firearm might have made the difference in his brother's final fight.

The Lindsay was designed to always drop its right hammer first to fire the front, superposed charge. If both hammers were cocked, this double rifle musket was intended to initially only drop the right one. What soldiers in the field found out was that the Lindsay, like new recruits, sometimes would have difficulty in telling right from left. If the lefthand hammer dropped first, igniting the back load, heavy recoil ensued as both loads discharged. Few Lindsays received favorable mention from the soldiers that received them in issue.

Soldiers of the 16th Michigan Volunteers in combat at Peebles Farm, VA in 1864 reported that in the heat of battle, simultaneous discharge of both charges was a common event and the stress of firing a double charge often destroyed the gun.