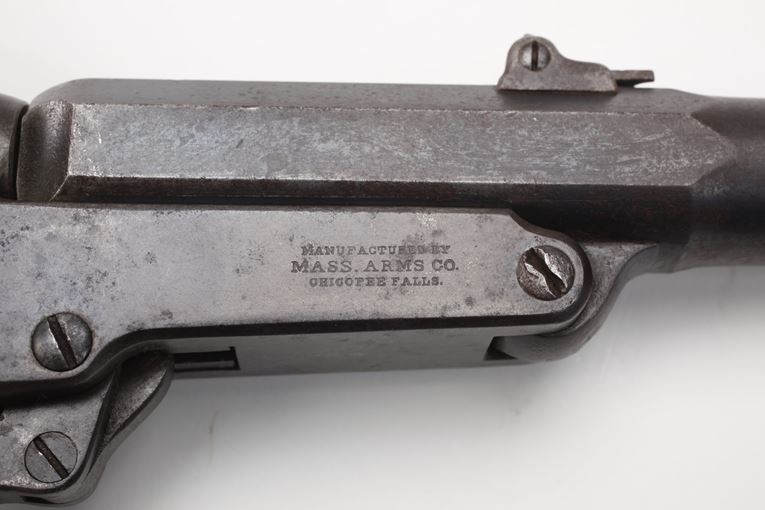 More than 20,000 Maynard Second Model Carbines were produced between 1863 and 1865 to arm Federal cavalry units. Unlike the First Model Maynard, the Second Model was produced exclusively in .50 caliber. In addition, the Maynard tape primer system, patchbox, and tang sight common to the First Model were omitted, and the profile of the buttstock differs between these two variants.


This percussion carbine was patented by Edward Maynard of Washington, D.C., December 6, 1859, and manufactured by the Massachusetts Arms Company of Chicopee Falls, Massachusetts. Introduced into United States service in the late 1850s, it was put into mass production in 1861 and performed well in the hands of Federal troops. Its 20-inch barrel measures 36 7/8 inches in overall length, and has no forestock. The barrel tips for loading when the trigger guard lever is lowered. Percussion caps were required to fire a perforated .50 caliber brass cartridge that required hand extraction. Early versions included the Maynard tape primer system, but wartime exigencies forced its elimination. Both barrel and buttplate were blued, and the receiver of this arm was casehardened. Some were tinned for Navy use.

Dr. Edward Maynard (1813-1891) was both a brilliant dentist and a gifted inventor. Born in Madison, New York, Maynard entered the United States Military Academy at West Point, but was later forced to resign due to poor health. Prior to the Mexican War, Maynard invented a mechanical priming system for use with percussion arms which was intended to replace the copper primers that had been used almost since the invention of this ignition system.

Perhaps Maynard's most significant firearms invention was his tip-up single-shot metallic-cartridge breech loading rifle, which he patented in 1851. Early models employed the Maynard primer system, but by 1865, this ignition system was replaced by a conventional percussion cone. The Maynard First Model Carbine was adopted by the U.S. Army in 1856, which sparked the formation of the Maynard Arms Corporation during the following year. The Massachusetts Arms Company of Chicopee Falls, Massachusetts, later undertook the manufacture the Maynard rifles and carbines. Approximately 5,000 First Model Carbines were produced in 1858-59 in .35 and .50 caliber. The larger-bore models saw service with Union troops in New Mexico, and some state troops and U.S. Marines were armed with these early in the Civil War. Several Southern states including Florida, Georgia, Mississippi, Louisiana, and South Carolina purchased Maynards from factory inventories prior to the outbreak of war, and contracts were given for production of additional arms.

All told, these orders accounted for nearly half of the total production for the First Model Carbine. In addition to prewar purchases, the Confederacy also acquired Maynards through the capture of Federal armories located in southern states. The Maynard Second Model Carbine was produced between 1864 and 1865, with more than 20,000 produced to arm Federal cavalry units. Unlike the First Model Maynard, the Second Model was produced exclusively in .50 caliber. In addition, the Maynard tape primer system, patchbox, and tang sight common to the First Model were omitted, and the profile of the buttstock differs between these two variants.

The Massachusetts Arms Company continued to produce Maynard rifles until 1890. These arms set a standard in both target and hunting activities in the United States. They proved to be extremely accurate, were well-fitted, and featured lapped barrels and interchangeable parts made of the best materials. Maynard rifles were available in a variety of grades ranging from an inexpensive gallery model to fancy-grade versions featuring adjustable long-range rear sights, engraving, and checkered pistol-grip stocks and forends, and in several models which ranged in caliber from .22 to .50. This proved to be a selling point, and customers were advised that, "You need not have several guns since you can buy interchangeable barrels for your Maynard action."

After leaving West Point, Maynard served a brief apprenticeship in dentistry, establishing a practice in Washington, D. C. circa 1833. He proved to be a brilliant dental scientist, and helped bring dentistry from "the deplorable depths of quackery" to a science dedicated to the betterment of mankind. In eight short years he moved to a major position of prominence in the field of dentistry. By 1841, at age 28, he was one of the first recipients of the honorary degree of Doctor of Dental Surgery from Baltimore College. Maynard was also awarded an honorary degree of Doctor of Medicine from Western Medical College. Maynard's contemporaries sometimes referred to him as the blacksmith dentist because he spent so much time at the forge making better dental tools, including drills and other surgical instruments.

A leading teacher, Dr. Maynard developed a number of ways to improve dental education. He was appointed Chairman of Theory and Practice at the Baltimore Dental College and held a similar position at the National University in Washington D.C. In these positions, Maynard insisted on aptitude testing which included not only academic aptitude but also the motor skills necessary in the field of dentistry. As a teaching aid, he produced a set of clear dentures complete with cavities to demonstrate to students the internal appearance of dental fillings.

Dr. Maynard was extremely gifted in his ability to calm and gain the confidence of his patients. Extremely concerned about pain, he sought and found ways to reduce suffering during dental surgery. Russia's Tsar Nicholas I was so impressed with Maynard's work on the royal root canal that he offered him the job of Imperial Dentist, a position of nobility which carried the rank of major in the Russian Army, to induce him to stay in St. Petersburg. Maynard declined but did accept a large ring with 60 diamonds as a token of the Tsar's appreciation. He also charged the Tsar a very heathy fee.

He also served as dentist for several presidents, ambassadors and many congressman and senators. Dr. Maynard died in Washington on May 4, 1891.