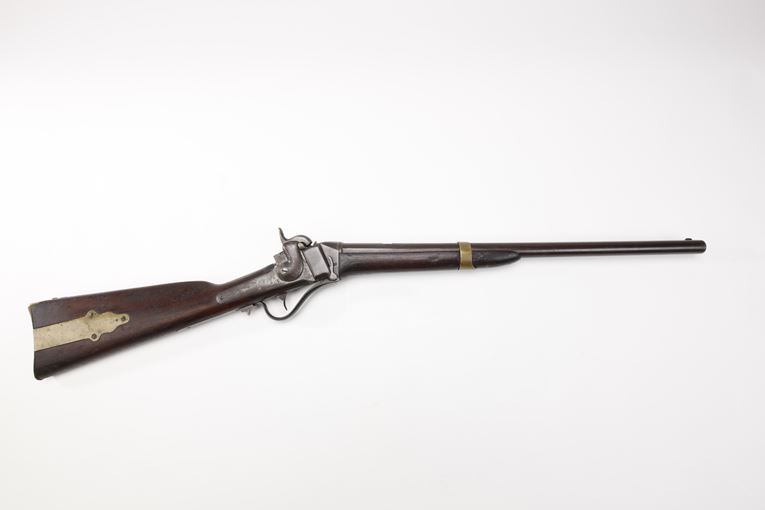 This slant-breech Sharps carbine is characterized by collectors as a Model 1853 and is sometimes called a "John Brown Sharps."


Out of a total production of 10,500, over 900 of these "Beecher's Bibles," named for abolitionist preacher Henry Ward Beecher, were purchased by New England abolitionists and shipped in crates marked BIBLES for the purpose of arming Free Soil settlers in Kansas during  the 1850s.   John Brown was one of many anti-slavery settlers who fought against pro-slavery "Border Ruffians" in Kansas prior to the Civil War, and some of these guns found their way with Brown to Harpers Ferry.

Christian Sharps (1811-1874) was the originator of a line of sturdy, practical, and popular military and sporting rifles and handguns that were associated with several events that shaped American history in 19th century, including armed conflict in Kansas during the 1850s, the Civil War, the era of the Plains buffalo hunter, and the rise of modern long-range competition shooting during the 1870s.  Sharps worked at John Hall's Rifle Works in Harpers Ferry, Virginia, where he learned the principles of arms manufacturing.  His first breechloading rifle design was patented in 1848, and the toggle-linking trigger guard and vertically operating sliding wedge breechblock of later Sharps rifles and carbines date from that patent.  These features are still with us today, and have seen use in both rifle and artillery breech mechanisms.  The spring lever-toggle-breech mechanism of the Borchardt-Luger semi-automatic pistol also had its roots in Christian Sharps' lever-linked breech.

In 1850, Sharps moved to Mill Creek, Pennsylvania, near Philadelphia, and contracted with the firm of A. S. Nippes to manufacture two of his sporting rifle designs, which became known as the Model 1849 and Model 1850.  Faced with difficulty in obtaining financing for further ventures, Sharps left the Philadelphia area in 1851 and relocated to Hartford, Connecticut, where he formed the Sharps Rifle Manufacturing Company.  Lacking production facilities, he contracted with the Windsor, Vermont firm of Robbins & Lawrence to manufacture his new breechloader.  This venture continued until 1855.  Among the Sharps-designed firearms manufactured under this association were the  Model 1851 "Box Lock" Carbine, which featured the Maynard tape primer system, and the Model 1852 and Model 1853 "Slanting Breech" Carbines, which were equipped with the Sharps-patented pellet primer system as an integral part of its breech mechanism.  Model 1853 Carbines were nicknamed "Beecher's Bibles," after noted New York clergyman and abolitionist Henry Ward Beecher.  Approximately 900 of these arms were shipped in heavy crates marked BIBLES for use by anti-slavery "Free Soil" settlers who were fighting against pro-slavery forces in "Bleeding Kansas" during the 1850s.   One of the most famous Free Soilers was John Brown, who later used 200 Model 1853 Carbines in his ill-fated attempt to capture the U.S. Armory at Harpers Ferry, Virginia in 1859.

Christian Sharps served as technical advisor to the Sharps Rifle Manufacturing Company, receiving royalties on the manufacture of their firearms.  His relationship with the company was a rocky one, and in 1853, Sharps severed all connections with the firm.  There is no evidence that he ever had any further association with the company that continued to bear his name.

In 1855, the Sharps company introduced the Model 1855 Carbine.  These arms retained the slanting breech and buttstock patch boxes of earlier models, but featured the Maynard tape primer system.  Approximately 800 .54 caliber carbines were manufactured for the U.S. government, and an additional 6,000 Model 1855s in .577 caliber were purchased by Great Britain.  While these carbines were in production, both Robbins & Lawrence and Sharps suffered serious financial losses.  The latter corporation went bankrupt, and their operations were taken over by Sharps and moved to Hartford.

During the Civil War, the Federal government bought over 80,000 Sharps carbines and nearly 10,000 Sharps Rifles to supplement the limited quantities of earlier slant-breech Sharps carbines models..  These arms were highly regarded by the troops who used them.  Sharps Carbines found favor with Federal cavalry troopers, and New Model 1859 Rifles were used with great success by famous infantry units such as Colonel Hiram Berdan's U.S. Sharp Shooters, perhaps the first specialty troops in the history of modern warfare, as well as the 5th New York (Duryea's Zouaves) and the 13th Pennsylvania Reserves (Bucktails).  Even the  Confederate government recognized the superiority of the New Model 1859 Carbine, contracting with the Richmond firm of S.C. Robinson for the production of 5,000 copies.

Although his association with the Sharps Rifle Manufacturing Company ended in 1853, Christian Sharps continued to work as a designer and manufacturer of firearms.  He returned to Philadelphia and formed C. Sharps & Co., a manufacturer of percussion revolvers, breechloading single-shot pistols and pistol-rifles, and four-shot pepperbox pistols.  In 1862, Sharps entered into a partnership with William Hankins.  Their new company, known as Sharps & Hankins, continued to produce pepperbox pistols, as well as the single-shot .52 caliber Model 1861 Navy Rifle and the Model 1862 Carbine, both of which featured sliding breech actions.  The partnership was dissolved in 1866, and Sharps reverted to the C. Sharps & Co. name.  This firm ceased operations in 1874 with the death of Christian Sharps on March 12 of that year.