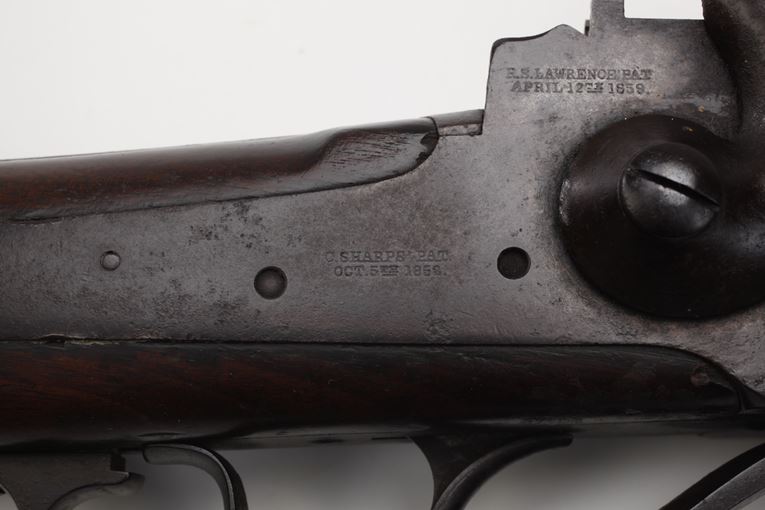 This breechloading .52 caliber carbine was originally intended for use by the U.S. Navy and was manufactured just prior to the American Civil War. Unlike other Sharps M1859 carbines, this variation does not have a sling swivel base and ring on the left side of the receiver, and instead an oversized sling mount was fitted to the buttstock on the underside.  Approximately 300 of these carbines were ordered from Sharps dealer J.C. Grubb of Philadelphia, PA.

While these carbines were in production, both Robbins & Lawrence and Sharps suffered serious financial losses. The latter corporation went bankrupt, and their operations were taken over by Sharps and moved to Hartford. The Sharps New Model 1859, introduced in that year, was available as a carbine, and in round-barrel military rifle or octagonal-barrel sporting rifle versions. Its straight-breech design is credited to Richard S. Lawrence, formerly of Robbins & Lawrence, who had become the superintendent of the Sharps Rifle Company. This design, in conjunction with a breechblock-mounted plate capable of slight rearward movement when under pressure, created a moderately effective gas seal. New Model 1859 arms also employed an improved version of the Sharps pellet primer system which allowed the pellet feed mechanism to be disengaged. Ordinary percussion caps could then be used, with the supply of pellet primers held in reserve. Like earlier Sharps designs, the Model 1859 fired a glazed linen combustible .52 caliber cartridge. When closed, the breechblock sheared off the rear of the cartridge, exposing the propellant.