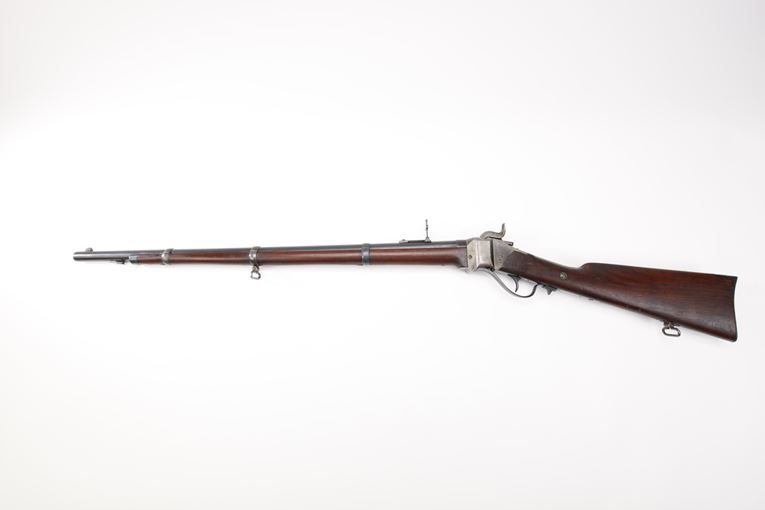 One of the best breechloaders of the war, the Sharps rifle was a favorite arm of marksmen. This example has a 30 inch barrel retained by three barrel bands. SN 42529

One of the most famous of Civil War sharpshooting arms, the .52 caliber Sharps Model 1859 is a breechloading falling-block rifle that used paper cartridge ammunition and either fulminate of mercury wafers or percussion caps as an ignition source. In the North, several regiments were provided with this arm by citizens who paid to equip and train them. Colonel Hiram Berdan, for example, raised two regiments of troops and equipped them with Sharps rifles. These regiments repeatedly were able to successfully engage four times their number of their enemy because of the rapid fire capability and great accuracy of their Sharps rifles. The South respected carbine versions of the Sharps and made copies of them for use by Confederate troops (see Case 35 gun #10).

Christian Sharps (1811-1874) was the originator of a line of sturdy, practical, and popular military and sporting rifles and handguns that were associated with several events that shaped American history in 19th century, including armed conflict in Kansas during the 1850s, the Civil War, the era of the Plains buffalo hunter, and the rise of modern long-range competition shooting during the 1870s. Sharps worked at John Hall's Rifle Works in Harpers Ferry, Virginia, where he learned the principles of arms manufacturing.

His first breechloading rifle design was patented in 1848, and the toggle-linking trigger guard and vertically operating sliding wedge breechblock of later Sharps rifles and carbines date from that patent. These features are still with us today, and have seen use in both rifle and artillery breech mechanisms. The spring lever-toggle-breech mechanism of the Borchardt-Luger semi-automatic pistol also had its roots in Christian Sharps' lever-linked breech.

During the Civil War, the Federal government bought over 80,000 Sharps carbines and nearly 10,000 Sharps Rifles. These arms were highly regarded by the troops who used them. Sharps Carbines found favor with Federal cavalry troopers, and New Model 1859 Rifles were used with great success by famous infantry units such as Colonel Hiram Berdan's U.S. Sharp Shooters, perhaps the first specialty troops in the history of modern warfare, as well as the 5th New York (Duryea's Zouaves) and the 13th Pennsylvania Reserves (Bucktails).