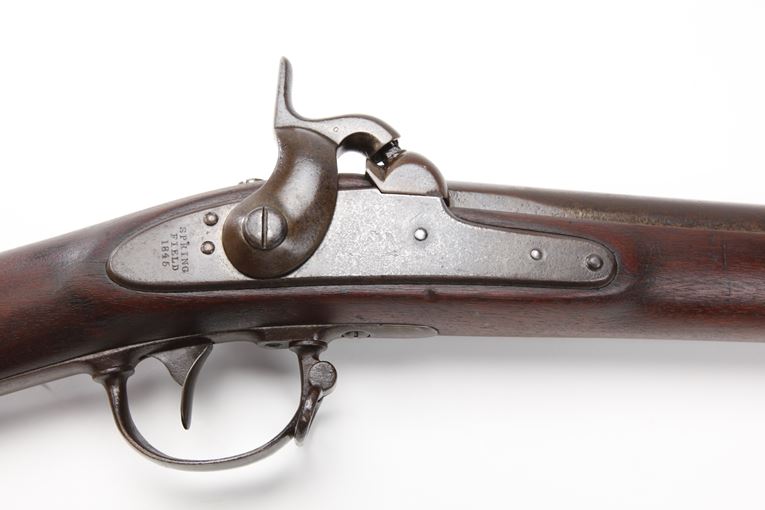 Several Federal and Confederate regiments were armed with smoothbores prior to 1863.

This musket was adopted by the U.S. Army in 1842, but production started too late for these arms to play a major role in the Mexican War. Nevertheless U.S. troops were equipped with modern high-quality percussion rifles and muskets. Mexican forces were issued obsolete flint-lock arms. As the war continued, U.S. General Winfield Scott led militia and regular troops into southern Mexico, where victory in five major battles brought about a Mexican surrender. In 1848, territory including the present-day states of California, Nevada, Utah, Arizona, and New Mexico was annexed by the United States. The U.S. was continuing to pursue and fulfill a policy of Manifest Destiny," a policy that also included the establishment of the Oregon territory which bordered on Canada. In 1846, the boundary between these two was established by negotiation at the 49th parallel."

The town of Springfield, Massachusetts, located on the banks of the Connecticut River, was settled in 1636 by emigrants from Roxbury. The town was nearly destroyed during King Philip's War in 1675, but it was quickly rebuilt. As early as 1776, Continental Army colonel and future Secretary of War Henry Knox recommended the establishment of public laboratories, magazines, arsenals and foundries in secure locations for the production and repair of arms, ammunition, and other ordnance stores. Both George Washington and the Continental Congress concurred with this recommendation, under which an ordnance depot was established at Springfield in 1777. The town's access to raw materials, sources of water power, and transportation, as well as its inland location which provided security against seaborne attack, made Springfield an ideal location.

Over the following year, buildings were rented or erected for use as barracks and storehouses. In addition to ordnance stores, the depot at Springfield also handled other aspects of army supply, including equipment, uniforms, tents, food, and fuel. The end of the War for Independence also brought a decline in military activities at Springfield. In 1794, an Act of Congress directed that national armories be established for the fabrication of small arms. President Washington selected Springfield and Harpers Ferry, which was then located in Virginia, as the sites for these facilities. In addition to the advantages that contributed to the presence of a Revolutionary War depot in the town, many skilled armory workers were still living nearby. The government acquired nearly 300 acres and constructed a dam to furnish power to the armory complex, as well as shops, offices, and storehouses. The first permanent structure to be constructed on the site was a brick powder magazine, which was torn down in 1842. Additional buildings have been constructed as necessary over the years since.