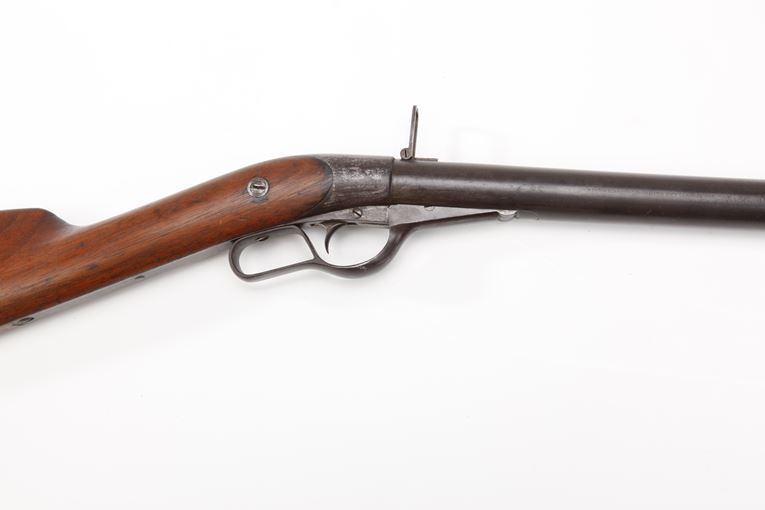 This lever-action rifle, also known as the "Thunderbolt", was invented and patented by Charles and Sebre Howard. Although designed in the early- to mid-1860s , these breech-loading carbines were not produced in time for Civil War service. Fewer than 2,000 were manufactured by the Whitney Arms Company during a production run that spanned the years 1866-1870. Tested in the U.S. Army's 1867 carbine trials, the diminutive Whitney-Howard rifle failed to gain military acceptance. One known deficiency of this short arm was its weak locking mechanism, which had a tendency to blow open under use. SN 308


The Howard "THUNDERBOLT" was the brainchild of two brothers - Charles and Sebre Howard. Sebre is responsible for the basic design, Patent number 36,779 being registered in his name on October 28, 1862. This original patent describes a breech-loading lever-operated rifle.

The cocking and firing mechanism was to be completely enclosed in a cylindrical extension of the breech of the rifle. Actuating the leverlike triggerguard drew back a piston and disc, compressing a spring housed in the cylinder. A hammer rod passing through the coil spring engaged the sear upon cocking. Closing the triggerguard sealed the breech by bringing the piston forward against the cartridge and chambering it. Pressure on the trigger released the hammer rod and attached disc, striking the piston. From the piston face protruded two small pegs which struck the rim of the rim-fire cartridge. Extractor jaws protrude from the top and bottom of the piston head alongside the cylinder wall to grip the base of the cartridge for extraction.

Three additional patents were granted, September 26,1865, October 10, 1865, and May 16, 1866, to Charles Howard, for improvements to the "THUNDERBOLT". These improvements covered the elimination of the set trigger, moving the loading port to the bottom of the weapon from the side, changes to the ignition and extraction systems, and improvements to the lever system and bayonet.

Although initial prototypes were constructed with an eye towards sale both to the U.S. Government and the New York State Militia as martial arms, it was the civilian market that finally saw the production of Howard "THUNDERBOLTS".

During the 1866-1867 time frame, Whitney Arms Co. of Whitneyville, Conn. Produced weapons under the Howard Patents. These fall into three categories: shotguns, carbines, and sporting rifles. Additionally, the sporting rifle was produced in limited quantities by Charles Pomeroy Button of London, England. The "THUNDERBOLTS" manufactured by Whitney are usually marked on both left and right sides of the barrel.

All together, there appear to be less than 1,700 Howard "THUNDERBOLTS" manufactured. Those known to still exist consist of two of the three patent models, three of the military musket prototypes, 62 or so sporting rifles, 11 shotguns, and 12 carbines. There is also one unmarked pistol known to be in existence, one parlor rifle, and the test trial rifle. The demise of the Howard "THUNDERBOLT" was probably due to several factors, the main one being (1) the availability of technologically-superior weapons from companies such as Sharps, Spencer, and Henry, and (2) the availability of millions of surplus weapons in the post-Civil War era. (From "Marv Adams Presents: The Howard "THUNDERBOLT". by Marv Adams)