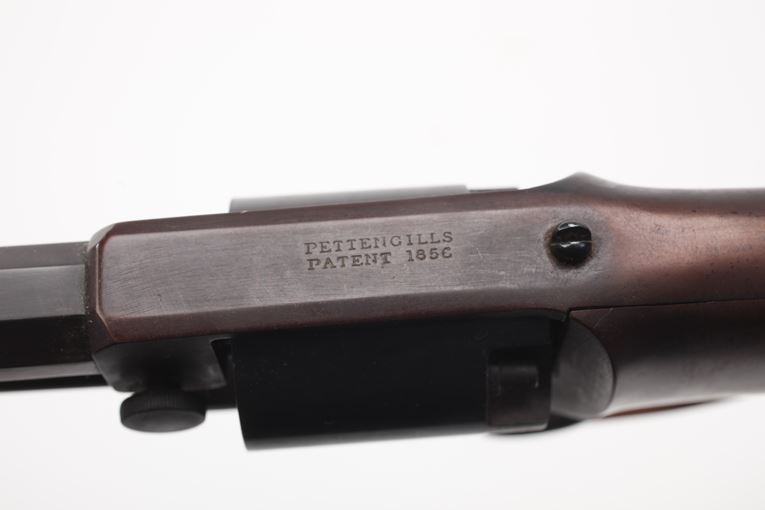 This double-action Pettengill was the only martial revolver to use an internal hammer. The Navy, or Belt Model, was an improved version of the earlier Pocket Model Revolver and featured a greater overall size and larger caliber than its predecessor. Pettingill revolvers were manufactured by Rogers & Spencer of Willowvale, New York c. late 1850s.


The unusual "hammerless" Pettengill revolver is self-cocking only. The L-shaped hammer is concealed within its frame. Pulling the trigger revolves the cylinder, fires, and cocks the hammer for the next shot. Its pepperbox-like mechanism was patented by C. S. Pettengill of New Haven, Connecticut, U. S. Patent 15,388, July 22, 1856, improved by Edward A. Raymond and Charles Robotaille of Brooklyn, New York, U. S. Patent 21,054, July27, 1858, and Henry S. Rogers of Willow Vale, New York, U. S. Patent 36,861, November 4, 1862. This weapon was manufactured by Rogers, Spencer & Company at Willow Vale, New York, before the Rogers & Spencer revolver was produced.