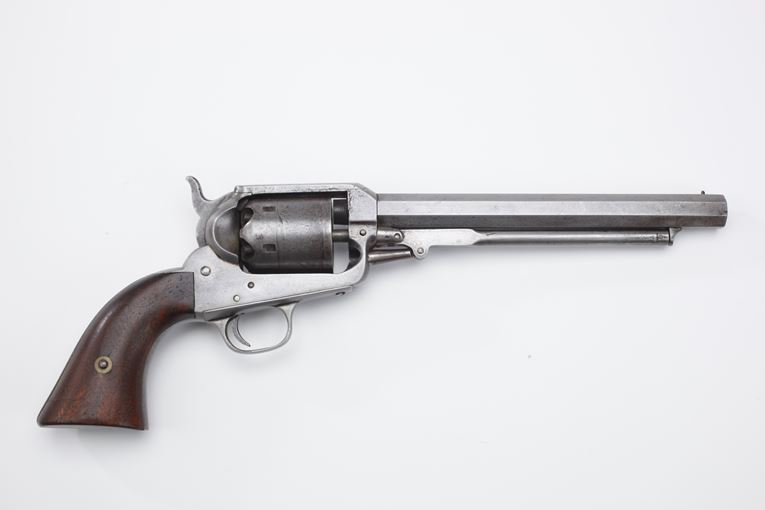 A competitor to Colt, Whitney handguns were the first practical solid-frame revolvers. Colt's patent for revolving cylinder arms expired in 1857, opening the door for other manufacturers on the eve of the Civil War. Over 33,000 Whitney revolvers were produced in the period c. late 1850s - early 1860s, with many acquired by the U.S. Army and Navy, by the State of New Jersey, and by individual Union officers through private purchase. Of these, only 200 were 1st Model, 2nd Type such as the revolver exhibited here.


This six-shot, single-action revolver has a 7 5/8-inch octagonal barrel rifled with seven grooves. Total length is 13 1/8 inches. It is similar in frame and barrel construction to the Remington. It weighs two pounds seven ounces. It has a narrow brass post front sight, a V-notch rear sight cut into the topstrap, and another U-shaped rear sight cut into the hammer lip. Its walnut grips were oil-finished and stamped with inspectors' initials sometimes when used in the U. S. armed services.

Some Whitney revolvers have a small Navy anchor stamped on butt frame or on barrel; others have the state militia marks "N.J." stamped on their frames and barrels. Early specimens have a Joslyn-type, ball-latch for the loading lever and later specimens have a regular Colt revolver latch. Top of the barrel is stamped "E.WHITNEY" over "N. HAVEN" in two lines. The cylinder is stamped "WHITNEYVILLE" in a ribbon across a shield, and a combined American and British coat of arms flanked by an eagle and a lion. In low-serial-number Whitney revolvers, this cylinder design is repeated twice, but on later revolvers it appears only once combined with a naval scene.

This revolver was manufactured at Whitneyville Armory (Whitney Arms Company), two miles north of New Haven, Connecticut, by Eli Whitney, Jr., son of the famous inventor of the cotton gin. Serial numbers run to about 30,000.