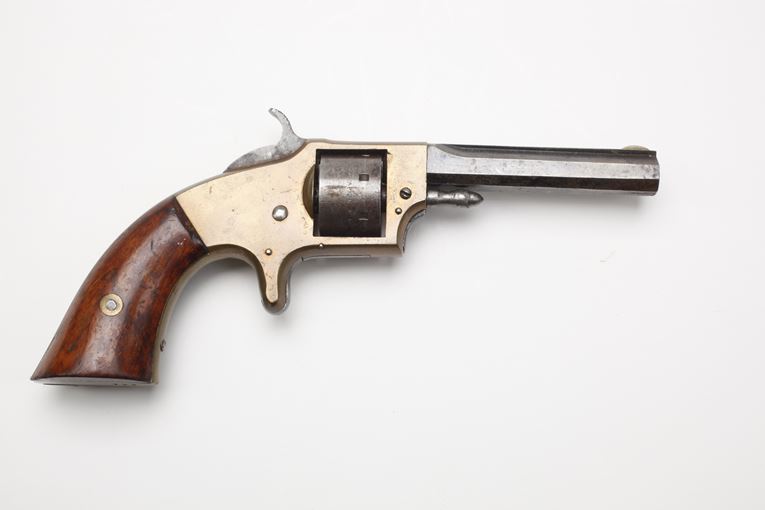 When Smith & Wesson was unable to keep up with Civil War-era demands for their revolvers, Rollin White formed a company in 1861 to manufactur these seven-shot single-action revolvers. They were marketed exclusively by Smith & Wesson. When White left the company in 1864, the name was changed to Lowell Arms Co. Approximately 5,000 Pocket Revolvers were produced under the Rollin White name and 5.000 more by Lowell Arms. SN 224

In 1857, Volcanic went into receivership. The firm's assets were purchased by Oliver Winchester, a Volcanic stockholder, and was reorganized as the New Haven Arms Company. Production was discontinued entirely in 1860, but the company survived, and by 1866 it became known as Winchester Repeating Arms Co. In November, 1856, Smith and Wesson formed a second partnership to develop and manufacture a revolver that chambered metallic cartridges. Wesson had continued earlier experiments intended to produce a self-contained metallic cartridge, and by August, 1856, he had completed a wooden model of a pistol designed to chamber a rimfire cartridge. Wesson soon discovered that a key feature of his design, a revolving cylinder that was bored to a constant diameter from end to end, had already been patented by Rollin White, a former employee of Samuel Colt. Smith and Wesson entered into an exclusive license to use White's patent in the manufacture of their revolver. White was to receive royalties of 25 cents per gun produced until the expiration of his patent in 1872. During Smith & Wesson's first year of production, White saw a meager $1 in compensation, but this was soon to change.

By 1858, Smith & Wesson's production of both revolvers and ammunition was increasing, and would soon outgrow their original manufacturing facilities. In 1860, the partners completed a new building that would allow continued expansion. Eventually, Smith & Wesson would sell their interests in ammunition manufacturing, but the production of revolvers would continue. Wesson's original design, the seven-shot Smith & Wesson Model No. 1 First Issue Revolver, was manufactured between 1857 and 1860. This model, with modifications, continued in production as the Model No. 1 Second Issue and Model No. 1 Third Issue Revolvers, with nearly 260,000 of all three variants produced before discontinuation in 1881. By this time, the firm's product line, payroll, and output had increased dramatically. Revolvers chambered for .32, .38, and .44 caliber cartridges supplemented the original .22s, and the firm employed about 500 workers and produced 400 revolvers per day.

Smith & Wesson had become dominant in the manufacture of revolvers, and the company's products were sold around the world. In July, 1873, Horace Smith retired after selling his interest in the company to D. B. Wesson. By 1880, Daniel's three sons, Walter H., Frank L., and Joseph H. Wesson, were working alongside their father, but Daniel continued to make all major decisions. Frank Wesson died in 1887, but Walter and Joseph continued as partners in the firm until D. B. Wesson's death in 1904. Both Walter and Joseph were well-qualified to assume management of the family business, but neither they nor the executors of their father's estate could agree on the future direction of the company.

Without Daniel B. Wesson's strong guidance, the firm experienced a prolonged period of weak leadership. Between 1912 and 1915, the two brothers alternated as president, until Walter's failing health forced him to cease active involvement with Smith & Wesson. Joseph then became president, but his own health problems frequently kept him away from his office. In 1917, the United States entered the First World War, and Smith & Wesson received large government contracts to produce revolvers for military use. The company expanded its operations into a new facility, and increased its workforce as well, but Joseph's ill health, as well as labor disputes, created major problems for the gun manufacturer. Consequently, the government took over management of the firm until the war ended.

Although still located in Springfield, Massachusetts, Smith & Wesson has been a corporate subsidiary since 1957. Presently, the company is owned by Tompkins, a British holding corporation. Under Hellstrom and his successors, Smith & Wesson has come full circle and is once again a leader in the field of firearms design and production.