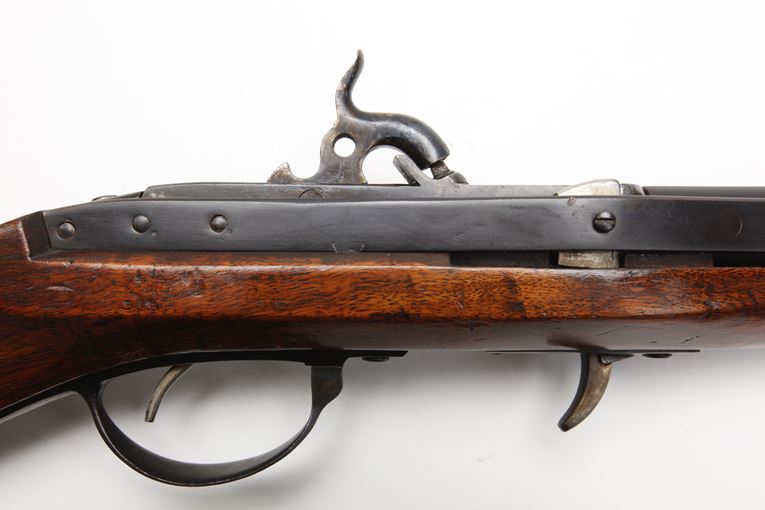 This model was issued to the 2nd US Dragoons during their service in Florida.


John Hancock Hall was born in the Falmouth District of Maine in 1781. Hall's father died in 1794, and the thirteen-year-old John became the head of the household. In 1803, Hall served as a member of the Portland Light Infantry, a local militia company, and this may have stirred his interest in firearms design. Aside from his efforts in this area, and a period of employment as a cooper, cabinetmaker, and shipbuilder, little is known of Hall's early years.

In March,1811, Hall secured a patent for a breechloading rifle design that featured a removable pivot-mounted breechblock. At this time, most military longarms were smoothbore .69 caliber muzzleloading flintlocks. These arms could be loaded and fired quickly, but were not accurate at ranges exceeding 80 yards. Typically, nine of ten companies of an infantry regiment were so equipped. The tenth, considered a "light infantry company," was armed with .52 caliber muzzleloading rifles that were more difficult to load, but in the hands of skilled troops, they were accurate at ranges up to 600 yards. Hall's Patent Rifle was more expensive than the muzzleloaders in use at this time, but this breechloader could be loaded faster than a smoothbore and shoot as accurately as a rifle. Most important was Hall's claim that the precision-manufactured machine-made parts for his rifle would be completely interchangeable, thus eliminating the need for skilled craftsmen to repair broken arms.

Government testing was delayed by the War of 1812, as well as a lack of funding in the immediate postwar years, and Hall turned to the production of sporting arms until fortunes improved. In addition to his abilities in firearms design, Hall was also a skilled pitchman. During this period he was successful in selling his ideas, if not the rifles themselves, to Army officials. In 1817, the U.S. Army asked Hall to produce 100 Patent Rifles for testing and evaluation. These hand-made examples were delivered that same year. At government invitation, Hall relocated his operations to the U.S. Arsenal at Harpers Ferry, Virginia, where he would produce additional examples. The Hall Patent Rifle was formally adopted by the government in 1819.

Hall received an initial contract to produce 1,000 rifles, and he set up shop in some unused armory buildings on Virginius Island, located near the banks of the Shenandoah River in Harpers Ferry. In addition to a government salary, Hall was paid a royalty of $1 for each rifle produced. Due to the complexity of this new arm, as well as the requirement for parts interchangeability, Hall spent nearly five years developing the tools and machinery necessary for the production of his rifles. No rifles were assembled prior to 1824, at which time all 1,000 were completed. The government ordered an additional 1,000 rifles, and these were completed in just over one year. In 1826, a special military commission was established to investigate Hall's claim of interchangeability. For testing purposes, 100 Hall rifles were disassembled, and the individual parts were mixed together. Then, using 100 new stocks recently delivered from Hall's rifle works, the rifles were re-assembled with no problems. As a result of this successful test, Hall received yet another government contract in 1828, this time for 3,000 rifles.

Manufacture of these arms at Harpers Ferry continued until 1840, with a production total of nearly 20,000 rifles. Demand increased for Hall's rifles, as state militias joined the Army in their desire to convert to these arms. The Army's Ordnance Department was faced with the problem of finding a contractor who could produce the Hall rifle while maintaining complete interchangeability of parts with specimens manufactured at Harpers Ferry. Such a contractor was found in Simeon North of Middletown, Connecticut. In 1828, North received a contract to produce 5,000 Hall rifles. Other manufacturers also received contracts to produce the Hall rifle, but only North delivered on his commitments, producing 5,700 rifles between 1830 and 1836.

The Sixth U.S. Infantry, stationed at Jefferson Barracks, Missouri, was issued Hall rifles in the spring of 1832. This unit fought in the Black Hawk War in Illinois and Wisconsin, and it was there that the Hall rifle first saw combat. The Sixth Infantry and their Hall rifles also saw action in the Seminole War in Florida in 1836. In 1833, Congress authorized the Army to raise a regiment of Dragoons (mounted infantry) for service on the frontier. Dragoons would fight as cavalry while mounted or as infantry when dismounted. A unit of this type would require a carbine as its primary arm, and Simeon Hall took on the task of developing a breechloading carbine based on Hall's rifle design. The result was a .58 caliber smoothbore percussion arm that featured a sliding rod bayonet.

In 1834, North received a contract to produce 1,000 of these carbines for use by Dragoons. These were the first percussion arms in the world to be adopted for military use. Additional Dragoon regiments would also be armed with the Hall-North carbine. Over 7,000 Hall-North carbines were manufactured between 1834 and 1839. Originally manufactured in .58 caliber, a .52 caliber version was introduced in 1836. In addition, Hall's Harpers Ferry works began production of a .64 caliber percussion carbine in 1836, with over 2,000 produced during a three year span. Both the Hall and Hall-North carbines would see additional improvements in the years prior to the Mexican War. The Model 1840 and Model 1843 Hall-North, and the Model 1842 Hall Carbines would account for the manufacture of nearly 17,000 additional arms. Harpers Ferry Armory also produced over 4,000 .52 caliber Model 1841 Hall Breech-Loading Percussion Rifles.

The Army's experiment of mixing calibers would soon give rise to problems with the Hall-North carbine, as powder charges in the smaller .52 caliber arms were not proportionally reduced from those used in the .58 caliber version. This caused many stocks to break. In addition, Hall and Hall-North arms of all types experienced problems with gas leakage at the joint between the breechblock and barrel. This problem also plagued other breechloading arms and would not be solved until the advent of metallic cartridge arms. The Hall and Hall-North rifles and carbines performed well during the war with Mexico, but the government had already decided to replace these arms with muzzle-loading percussion musketoons. All production at Harpers Ferry and Middletown ceased by 1853, and, except for limited use, Hall-design longarms were withdrawn from service and placed in storage until the outbreak of civil war in 1861.

Both Union and Confederate troops used these now-outdated but still serviceable breechloaders. The Hall and Hall-North rifles and carbines represent a number of firsts. The Model 1819 Rifle was the first breechloading rifle adopted for general issue, as well as the only gun presented by Act of Congress in lieu of a medal or other citation for gallantry. The Hall-North Carbine was the first percussion arm adopted for military service anywhere in the world. Perhaps foremost among these is the first full interchangeability of precision-made parts between mechanical devices manufactured in more than one location. This feature gave rise to the "American System of Manufacture," and played an important role in the Industrial Revolution.

An argument could be made that Hall, not Eli Whitney, deserves credit for this process. John Hall died in 1841, and although his design would eventually fall from favor and be supplanted by other arms, his foresight contributed heavily not only to firearms technology, but to American commerce and manufacturing.