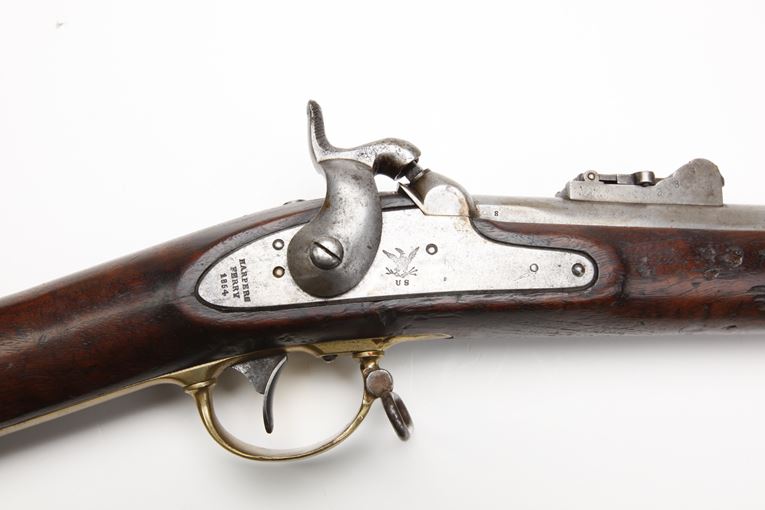 Over 75,000 Model 1841 Rifles were manufactured at both the U.S. Armory at Harpers Ferry, Virginia, and under private contract. Mississippi troops serving under future Confederate President Jefferson Davis used this rifle quite successfully during the war with Mexico, hence the nickname "Mississippi Rifle." Many of these two-band rifles saw service through the Civil War, and some, including this example, were re-bored from the original .54 caliber to accept the then-standard .58 caliber Minie ball.


The town of Harpers Ferry is nestled into a valley at the confluence of the Shenandoah and Potomac Rivers. Originally located in Virginia, Harpers Ferry became part of the new state of West Virginia in 1863. The region abounded with natural resources, including abundant water power, and it was also isolated from the coastline and therefore secure from possible enemy attacks. Riflesmiths, artisans, and other skilled workers also made their homes in neighboring areas of Virginia, Maryland, and Pennsylvania. In 1798, President George Washington selected Harpers Ferry, as well as Springfield, Massachusetts, as the location for a national armory where small arms, ammunition, and other accouterments would be produced for use by the new nation's military forces.

In 1798, tensions between the United States and France were on the rise, and American militia forces drilled on the heights overlooking the town. As the threat of war passed, the troops dispersed, leaving Harpers Ferry to the care of armory workers and other residents. Arms production began in 1800. The first guns to be manufactured at Harpers Ferry were the Model 1795 muskets. These were patterned after the French Model 1763 Charleville musket, and were the first standardized U.S. martial arms. Springfield Armory also produced a Model 1795 musket, but these were distinctly different from those manufactured at Harpers Ferry.

In the early 19th century, Harpers Ferry began production of the Model 1803 flintlock rifle. These distinctive arms, with their Kentucky styling and half forestock, are considered by some to the most beautiful rifles ever produced by the United States government. The Model 1816 was first standardized U.S. martial arm to be manufactured at both Harpers Ferry and Springfield. These arms enjoyed the longest production run in U.S. history, lasting until 1844, with nearly 700,000 muskets turned out during this period. Both armories also produced the Model 1842 percussion musket and Model 1855 percussion rifle-musket. These arms are significant in that the Model 1842 was the last U.S. regulation .69 caliber smoothbore, as well as the first to be made at both armories with completely interchangeable parts, while the Model 1855 rifle-musket was the first rifle-musket to be produced by the United States, the first to be produced in the new regulation .58 caliber, and the last arm to be produced at both government armories.

In addition to commonly produced arms, each armory was the sole producer of certain other designs, such as the Model 1855 percussion pistol-carbine and various musketoons and cadet muskets that were produced solely at Springfield, or the Model 1803 flintlock rifle, and the Model 1841 percussion, or "Mississippi" rifles that were produced only at Harpers Ferry. In addition to its role in turning out government longarms, Harpers Ferry also was home to John Hall's rifle works. Hall was a native of Maine and an inventor who held various patents for breech-loading rifles based on a removable pivot-mounted breechblock. These arms were more expensive than muzzle-loaders, but they could be loaded more quickly and were just as accurate. In addition, Hall's rifles featured precision-manufactured machine-made parts that were completely interchangeable, thus eliminating the need for skilled craftsmen to repair broken arms.

The Hall rifle was the first in U.S. military history to use fully-interchangeable parts. In 1817, at the invitation of the U.S. Army, Hall relocated his operations from Maine to some unused armory buildings on Virginius Island, located near the banks of the Shenandoah River in Harpers Ferry. Originally designed as flintlocks, later versions of the Hall rifle featured a percussion ignition system. The first Hall rifles were produced in 1824, and manufacture of these arms continued until at Harpers Ferry until 1843. In addition, Hall rifles and carbines were also produced by Simeon North of Middletown, Connecticut. These arms served in the Black Hawk War of 1832, the Seminole War in 1836, the Mexican War, and, although outdated, Hall rifles also saw action with Confederate troops during the Civil War.

The presence of the armory in Harpers Ferry, as well as its location on the Potomac and Shenandoah Rivers, and the presence of the Baltimore & Ohio Railroad and the Chesapeake & Ohio Canal, made the town strategically important. Prior to the outbreak of the Civil War, Harpers Ferry became known as the site of John Brown's failed slave insurrection in 1859. After Virginia voters passed an ordinance of secession in 1861, the town was occupied by Confederate soldiers under the command of Colonel Turner Ashby. Retreating U.S. troops had tried to burn the armory complex, but local residents, fearing that the entire town would be engulfed, quickly extinguished most of the fires. The Confederates removed armory machinery, tools, rifles, and parts to Richmond, Virginia and Fayetteville, North Carolina, where the Confederate government began to manufacture longarms based on the U.S. Model 1855 rifle design.

The Civil War brought an abrupt and premature end to arms production at Harpers Ferry. This armory was never as progressive as its sister arsenal at Springfield, where enterprising Yankees more readily seized new technologies, while their southern brothers were more likely to stick to tried-and-true but often more labor-intensive production techniques. Springfield workers also outproduced those of Harpers Ferry to a significant degree, but part of Springfield's advantage might lay in its less diversified product line. In addition, production costs were higher at Harpers Ferry than at Springfield, and the town was subject to repeated disruption due to frequent flooding of its surrounding rivers.