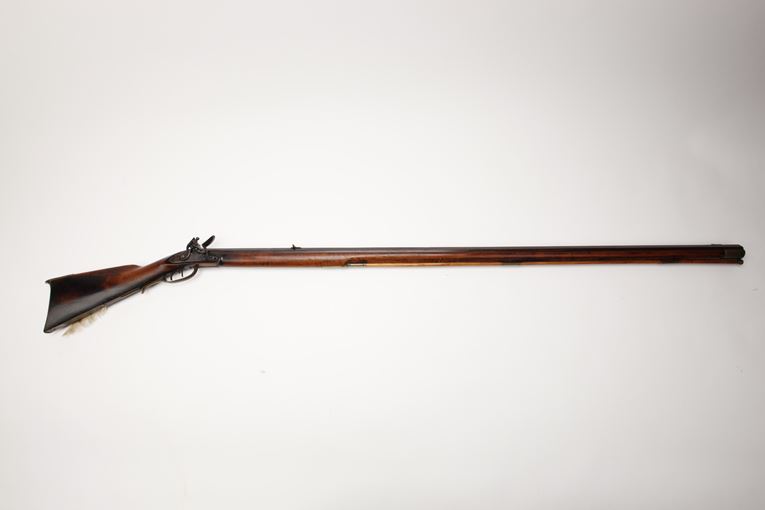 Frontier riflemen armed with guns similar to the one exhibited here took a fearful toll on British officers and infantrymen while serving under General Andrew Jackson in the Battle of New Orleans during the War of 1812. American casualties in that battle totaled 21 killed and wounded, while the British forces lost over 2,000 men. Feathers were carried by many frontier travelers and used to clear vent holes. This "stump gun" features a heavy barrel and forestock, and double-set triggers. The stock is made of plain maple, and the furniture is of brass.


Circa 1795 Flint-lock Kentucky Long Rifle" (single-shot/ muzzle-loading/ black powder/ ball ammunition) After the United States won her independence, long rifles moved southwest, out of the hills of Kentucky and into open country. Here, animals were larger and ranges greater. The environment required larger rifles that carried more "punch." Like other artifacts, firearms change to meet new requirements of each society that they help to support. Full-stocked and pinned, the rifle displayed here was probably made in New Orleans. It represents a new breed of arm. Heavy and extra-long, its mass allowed for more hunting power. When used for fighting, these rifles were devastating to opposing forces. At the Battle of New Orleans during the War of 1812, militia commanded by General and future president Andrew Jackson used rifles of this type to destroy a British army, thus ending any ideas of royal conquest in the Americas." --Dr. William L. Roberts, THE AMERICAN LIBERTY COLLECTION; #29