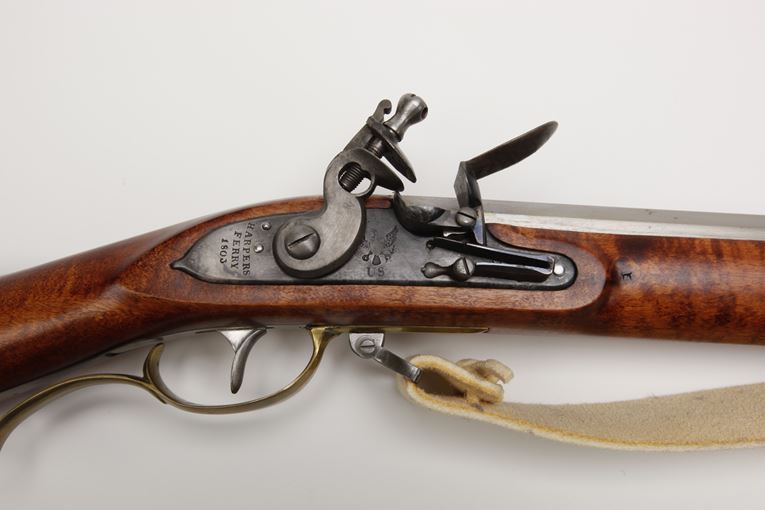 Fifteen Harpers Ferry Model 1792 rifles are believed to have been issued to Lewis and Clark's Corps of Discovery. This reproduction example was made by Virginia-based gunmakers Al Edge and Don Stith and represents a replica crafted on the features found on the surviving examples. The M1792 was a heavier built rifle than the typical "Kentucky" and well suited to the rigors of military service. It is believed that many of these rifles were built under US government contract by Lancaster, PA gunsmiths. The completed M1792 rifles were received from various locations, but the majority were issued through Harpers Ferry.


On February 28, 1803, President Thomas Jefferson won approval from Congress for an amazing endeavor. Congress appropriated the sum of $2,500.00 to fund a small expeditionary group, known as the Corps of Discovery, whose mission was to find and map a transcontinental water route to the Pacific Ocean through the territory recently acquired from France in what became known as the Louisiana Purchase. Led by Jefferson's secretary, Meriwether Lewis, and Lewis' former Army colleague William Clark, the Corps would spend three years and travel thousands of miles through the newly-acquired territory, where they encountered exotic lands, rivers, animals, and peoples.

Lewis and Clark maintained a detailed journal of western geography, climate, plants and animals, and the customs and languages of Native American peoples. Their report also described the nearly two tons of supplies carried by the members of the Corps, including their firearms and accessories: "1 Pair Pocket Pistols, 1 Pair Horseman's Pistols, 15 Rifles, 15 Powder Horns and Pouches, 15 pairs of bullet molds, 15 wipers or gun worms, 15 ball screws, Extra Parts of Locks and Tools for Repairing Arms, 15 Gun Slings, 500 Rifle Flints, 420 Pounds of Sheet Lead for Bullets, 176 Pounds of Gunpowder, , 52 Leaden Canisters for Gunpowder, and 1 Long-Barreled Air Rifle."