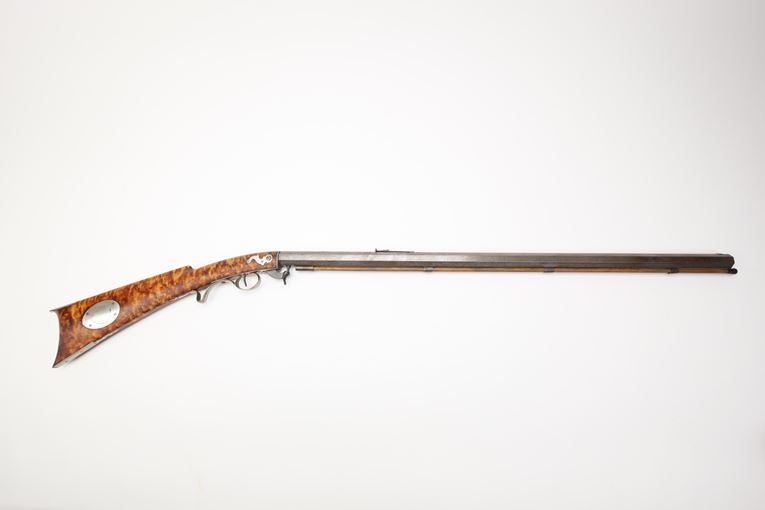 Underhammer target arms allowed a variety of sights to be mounted on the upper barrel surface.  The stock is of birdseye maple with German silver mounts.


Circa 1848 Nicanor Kendall (U.S.) Percussion Underhammer Rifle (single-shot/ muzzle-loader/ black powder/ ball ammunition)  In the middle and late 1840s, underhammer rifles became popular in the United States.  Their main advantage consists of the fact that the percussion cap is located such that if the rifle backfires, the shooter's face is protected.

The main disadvantage of this design is in the inconvenience inherent in capping the cone.  Most underhammers were made in New England; this example was manufactured in Windsor, Vermont.  Underhammer rifles were made in a wide range of sizes, from light to heavy, and they also had a wide range of uses, from target shooting to hunting.  They were, however, not a firearm that was in the forefront of westward expansion.  Although this specimen is of top quality, most underhammers were functional rather than fancy.    - Dr. William L. Roberts, THE AMERICAN LIBERTY COLLECTION; #57

Nicanor Kendall was born in Windsor, Vermont in 1807.  The son of a blacksmith, Kendall served an apprenticeship under gunsmith Asa Story.  Kendall had received a patent for his underhammer percussion lock, which was both safer and more reliable than other types.  In addition, his design was much simpler than other percussion designs and therefore easier to produce, and his guns featured interchangeable parts that could be produced by a combination of skilled and unskilled workers.

After his c. 1835 marriage, he began to manufacture underhammer pistols and rifles at a pump manufactory operated by his father-in-law, Asahel Hubbard, which was located at the state prison in Windsor.  Kendall produced his arms using Hubbard's machinery and unskilled prison labor for which he paid compensation to the state, and hiring skilled workers to perform fine work.  His arms became quite popular, both in the local area and in other parts of the growing nation and surrounding territories.  One of the first large orders for Kendall's products came in 1836 from the citizens of Texas, who were seeking their independence from Mexico.

By 1843, Kendall had entered into a partnership with Richard Smith Lawrence, a young man who was born in Connecticut but raised on a farm in neighboring New York.  As a youth, he worked in his uncle's carpentry tool-making shop, and spent his free time learning the gunsmithing trade at a gun shop that was located downstairs from his uncle's business.  After working at several jobs and serving a three-month hitch in the army on the frontier, Lawrence relocated to Windsor, where his skills came to Kendall's attention.  The two opened a custom rifle shop on Mill Brook in Windsor, taking advantage of the water power produced by a local dam.  Here, they manufactured both underhammer and side-hammer percussion rifles and shotguns.

In late 1844, Samuel E. Robbins, a retired lumber dealer, suggested a partnership between himself, Kendall, and Lawrence to bid on a government contract for production of 10,000 military long arms patterned after the U.S./Harpers Ferry Armory Model 1841 Rifle.  Their bid of $11.90 per rifle was ten cents lower than those of competing companies, and the three found themselves in the business of manufacturing military arms for use in the event of war with Mexico.  The trio began to expand operations, both recruiting skilled workers from the shops of Eli Whitney, Amoskeag, Springfield Armory, and others, and building additional manufacturing facilities and lodging for the growing workforce.

The expanding Industrial Revolution made this period a watershed in American industrial history.  The age of hand-made arms produced by skilled craftsmen was rapidly yielding to mass-produced rifles with interchangeable parts.  Machinery was either purchased or designed and built by the partners.  All gun parts were made with precision gauges, jigs, tools, milling machines, drill presses, and  tapping/threading machines to ensure interchangeability, and water power was harnessed to run boring and rifling machines via an overhead drive shaft and belt system.  The system of mass production introduced at this factory also proved to be extremely efficient.  The firm was able to complete their order eighteen months ahead of schedule, and they were awarded a second contract for an additional 15,000 arms.

Nicanor Kendall sold his interest in the company and moved to Iowa, while his former partners expanded the business.  Aside from an unsuccessful venture into railroad car production, Robbins & Lawrence continued to concentrate on firearms manufacturing.  Richard S. Lawrence and Tyler Henry, a gunsmith and foreman at Robbins & Lawrence, worked together on the Jennings Repeating Rifle, a project that combined their talents with those of Horace Smith and Daniel Wesson, later to become famous both for their revolver designs and for the Volcanic lever-action pistol and carbine.

Lawrence invented a lubricated bullet which improved the function of breech-loading repeaters, and Henry would build on his experience with both the Jennings rifle and Volcanic arms to develop the Henry lever-action repeating rifle, a forerunner to the famous Winchester Model 66 rifle and carbine.  Lawrence also developed the "Lawrence Pellet Primer System," which was successfully used with Christian Sharps' breech-loading carbines and rifles of the Civil War period.  Lawrence would later become Master Armorer for the Sharps Rifle Manufacturing Company at that company's Hartford factory.

During the 1851 Crystal Palace Exposition in London, Robbins & Lawrence demonstrated their system of interchangeability to participants and spectators, earning an award for their efforts.  The British government armory at Enfield purchased machinery from Robbins & Lawrence, making them the first U.S. firm to export the new technology in a significant way.  The Windsor company also received a contract to produce 25,000 rifles for the British military in their Connecticut arms factory.  Robbins & Lawrence defaulted on the terms of the contract, and were forced into bankruptcy.  The firm and its assets became the property of the British Crown, and these facilities were leased back to Samuel Robbins and others for the purpose of completing the outstanding order.

In 1858, the buildings and machinery of the former Robbins & Lawrence company were purchased by E. G. Lamson and his business partners, who then manufactured sewing machines in the former rifle shops.  When Civil War erupted in 1861, this firm turned their efforts to arms production as well.  They received a government contract for 50,000 longarms patterned on the U.S./Springfield Armory Model 1861 Rifle-Musket.  In 1864, E. G. Lamson received a government contract to produce 1,000 breech-loading repeating carbines designed by Albert Ball of Worcester, Massachusetts, as well as a second contract for 1,000 Palmer breech-loading carbines. These arms, which were delivered in mid-1865, came too late to see service with the Union Army.

After the war, Lamson changed the name of his firm to the Windsor Manufacturing Company, and by 1870, he had sold his arms making tools and machinery to Winchester and Smith & Wesson.  He continued in business as a manufacturer of machine tools for a number of years, later under the banner of Jones & Lamson Machine Company of Springfield, Vermont.

What became known as "The American System of Manufacture" had its roots in firearms production, both in New England and at John Hall's rifle shop in Harpers Ferry, Virginia.  Robbins & Lawrence and their successors played an important role in this era, as did several other rifle works in the Connecticut River valley.  Although the company founded by Nicanor Kendall, Samuel E. Robbins, and Richard Smith Lawrence is long gone, their influence continued for many years through the products of Smith & Wesson and Winchester Repeating Arms Company.