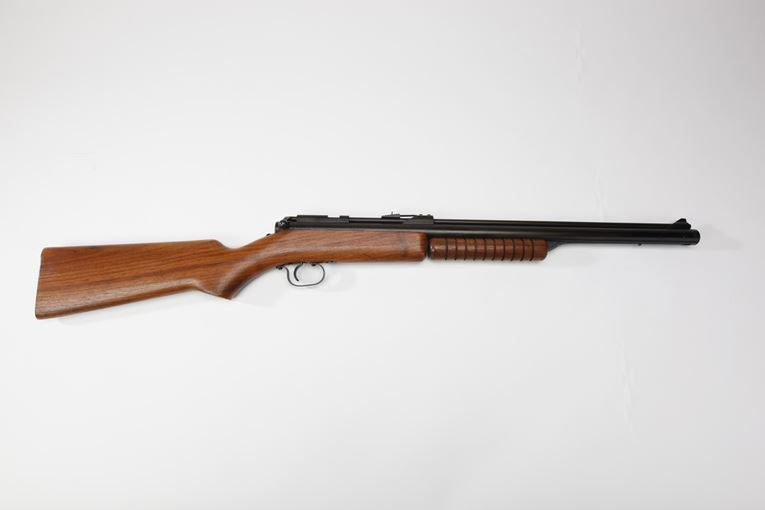 The Benjamin Air Rifle Company is the world's second-largest manufacturer of high-powered compressed air and CO2 pellet guns. Benjamin is the only firm that has been consistently manufacturing compressed air guns throughout the 20th century, and the only firm aside from Daisy to survive from the period over a century ago when air rifles first began to find acceptance as firearm training aids.

Although Benjamin's designs have been generally good, sales have not matched proper expectations for a variety of reasons, not the least of which was the preference of many smallbore shooters for .22 caliber cartridge rifles. In recent years, air guns have found favor with many shooters due to the increased short-range accuracy of modern designs, as well as the difficulty in many areas of constructing and operating ranges for firearms which use cartridge ammunition.

In 1882, W. R. Benjamin of St. Louis, Missouri, introduced the first Benjamin air rifle. These "Benjamin Pump" guns were manufactured by the Wissler Instrument Co. of St. Louis under a U.S. patent that had been issued to Benjamin. Unlike many air guns of this period, the Benjamin was intended not as a toy, but as a high powered compressed air gun in which pressure was built up by pumping a built-in pistol located beneath the barrel. Velocity could be controlled by regulating the amount of air pumped into the storage reservoir. Three or four strokes were usually sufficient to provide a high-velocity shot in the 300 - 400 feet per second range, with round shot or dart ammunition.

Additional pressure could of course be built up through repeated piston strokes. Although as many as ten strokes were possible for maximum pressure, pumping becomes increasingly difficult with each successive stroke. This problem was solved with the introduction of air guns which relied on compressed carbon dioxide gas stored in replaceable cylinders as a propellant.

Although not the first company to produce such arms, Benjamin followed suit with the introduction of the Super CO2, a pistol capable of firing approximately 40 shots per cylinder, with .177 or .22 caliber pellet ammunition. Unlike their competitors who relied on rechargeable cylinders or generic units purchased from the local hardware or drug store, Benjamin produced and marketed their own gas cylinders which could simply be thrown away when their gas supply was exhausted. While other manufacturers stored their propellant gas inside the grips, Benjamin CO2 pistols were especially distinctive in appearance, with their under-the-barrel tube for accommodation of gas cylinders. Benjamin continued to improve their product line through the introduction of new CO2 rifle and pistol designs.

Even after the introduction of CO2-powered guns, Benjamin continued to manufacture a wide range of pneumatic rifles and pistols which competed successfully with the products of other manufacturers such as Crosman and Sheridan. Later, these three former competitors would become one company under the Crosman Banner. The Benjamin Air Rifle Co. was acquired by Crosman Air Guns in 1992. The Sheridan Co. was also acquired by Crosman, and in 1994-95, some Benjamin and Sheridan product lines have been merged under Crosman ownership.