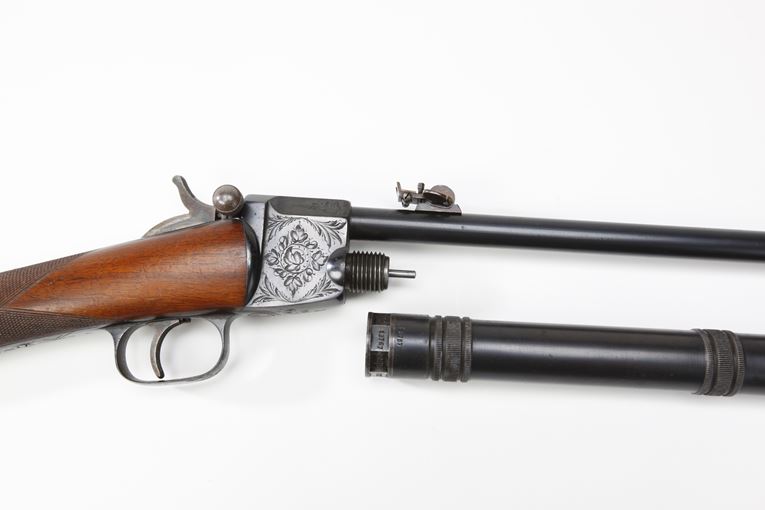 
French engineer Paul Giffard came from a family with a history of experimenting with compressed gasses. His older brother Henri had worked on developing airships, and is credited with having made the world's first powered flight in a dirigible on December 21, 1852. Paul, who later developed the world's first successful CO2-powered gun, worked with his brother before becoming involved in the liquification and compression of gasses. Among his 200 patented inventions are a pneumatic telegraph, which employed air pressure contained within tubes to transmit messages, and the now-familiar pneumatic tubes used at drive-in banks and other businesses for fast delivery of documents, currency, and other small items.

During the 1850s, Giffard patented a single-shot pneumatic breech-loading gun that featured a pump and air reservoir located under the barrel. In 1872, he received a patent for a new gun design which used removable cartridges containing compressed air-, compressed gas-, and liquified gas as a propellant source. These arms released the entire propellant charge with every shot, which made it necessary for users to go through a laborious process to install a new gas cartridge for each subsequent shot. This disadvantage prevented Giffard's design from gaining widespread acceptance.

However, the same patent also covered a gun with a large-capacity reservoirs and a system of regulating the amount of gas necessary for each shot, thereby making it possible to fire multiple shots from a single propellant cartridge. It was this feature, coupled with Giffard's adoption of CO2 as a propellant, that resulted in the issuance of another patent during the late 1880s for the first practical CO2 guns. These arms, which included pistol, rifle, and smoothbore versions in 4.5mm, 6mm, and 8mm calibers, were produced by noted French armsmakers Manufacture Francais d'Armes et Cycles de St. Etienne.

Later, Giffard organized the Giffard Gun and Ordnance Co. in London, England. The original French-manufactured designs featured a cylindrical steel reservoir which was closed on one end, while the other end contained a valve. This reservoir was pressurized to 4,000 p.s.i., which permitted the shooter to fire between 40 and 60 shots. A hammer-and-rod system was used to open the valve on the CO2 reservoir, releasing gas which then traveled to the chamber via an internal channel. Pressure could be regulated for long- or short-range shots via an adjustable hammer stop which lengthened or shortened the time period in which the gas reservoir remained open. Giffard's British subsidiary manufactured an improved lever-action hammerless version of this gun that featured an octagonal barrel and a counter for tracking gas usage.

These guns caused a stir in scientific and military circles, as well as in the firearms manufacturing community. Some military thinkers of the time considered CO2 guns to be revolutionary, and suggested that their "silent deadliness" might play a major role in determining the conduct of future wars. In fact, Giffard believed that his invention held the promise of making powder-burning arms obsolete, and Colt's Manufacturing Company even went so far as to pay one million dollars to purchase the American rights to produce these guns, thus ensuring themselves a dominant position in the U.S. market should the Frenchman's prediction bear fruit.

Unfortunately for both Giffard and Colt stockholders, this did not come to pass. Gas-powered arms have never been successful in achieving the power and efficiency of powder cartridges. In the words of one British expert, "after many experiments its promoters appear to have been convinced that, save for small target or saloon rifles and toy guns, the invention is practically useless." The Giffard Gun and Ordnance Co. went into voluntary liquidation in 1894. Giffard never gave up his belief that CO2 guns would eventually replace conventional firearms. He returned to France, where production of his guns continued until his death in 1897.

During the 20th century, Paul Giffard's ideas for pneumatic and compressed-gas guns have gone on to find success both as trainers and as smallbore target arms, and several companies, most notably Crosman and Daisy, have built successful businesses based in part on his work.