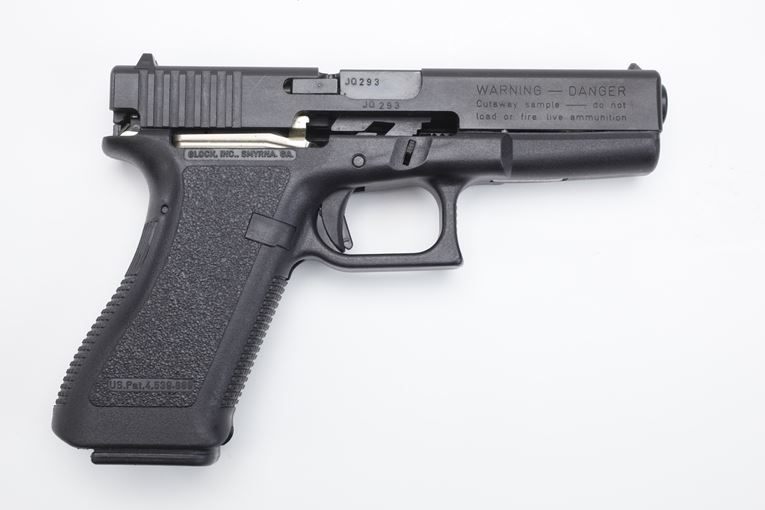 Featuring polymer construction, the Glock 17 was the invention of Austrian Gaston Glock. The Glock has been adopted by many law enforcement agencies to replace their revolvers. In addition to its large 17 round magazine capacity, a factor in their choice may have the pistol's simple operation which could ease the transition to the new gun. Like the double action revolver, the Glock has no external safety devices to manipulate and requires only a single pull on the trigger for each shot. SN JQ293


The Glock 17 was the first of the now widely used Glock polymer framed pistols. The Glock 17 was adopted in 1983 as the service pistol of the Austrian army to replace the Walther P-1. The Glock Company had been previously involved mostly in cutlery. Neither the company nor its head, Gaston Glock, had any previous experience in firearms design or manufacture. Gaston Glock had, however, specialized in advanced plastics and metal technology for over 25 years and this background is apparent in the novel design and construction of his pistol.

The Glock gained early notoriety in this country when a well-known columnist claimed that it was made largely of plastic for the purpose of evading detection by airport screening devices. This is not the case, of course, since the pistol contains 19 ounces of steel, more than many small pistols and is readily detectable by security gates. When run through the airport x-ray machines, the pistol has a somewhat ghostly outline but still looks exactly like a pistol.