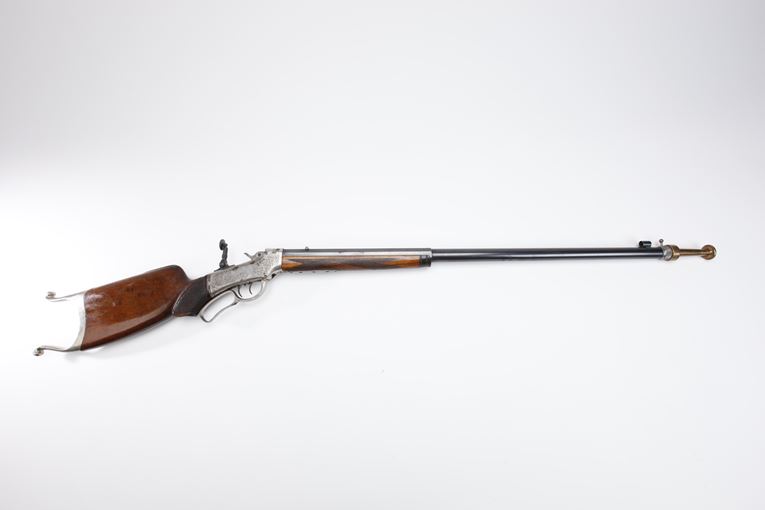 The original Ballard barrel on this factory engraved rifle was re-rifled by Harry Pope and then re-chambered by the Zetler Brothers of New York for sale by dealer Axel Petersen. Marlin-Ballard rifles were made c. 1875-1891. SN 26842


During the latter years of the 19th century, medium-range Schuetzen (offhand) matches became very popular. A typical off-hand rifle of that period was fitted with an adjustable palm rest below the forearm. The palm rest often could be swung to a vertical position for firing, with the ball or grip piece held in the shooter's hand. The shooter's elbow was braced against his hip to provide the necessary steadiness in the off-hand position. Action of the typical Scheutzen rifle was fitted with a heavy barrel, usually octagonal, and the target sights were fully adjustable for windage and elevation. The action was fitted with double set triggers and an elaborate finger lever typical of the ornamental designs of the late 19th century. Also standard was a high comb butt stock to properly locate the shooter's face in the off-hand position, and an elaborate hooked butt plate to accurately position the butt of the rifle during firing. John Mahlon Marlin was born on May 6, 1836 near Windsor Locks, Connecticut.

At the age of 18, he became an apprentice machinist with the American Machine Works. He later served as a machinist with Colt Patent Firearms of Hartford. In 1863, he started his own pistol manufacturing business in New Haven, concentrating on production of a small single-shot .22 caliber deringer. Marlin expanded his efforts to include revolver in 1870, after the expiration of Rollin White's cylinder patents. The Marlin story later became intertwined with the Ballard breech-loading rifle. These single-shot arms were invented by Charles H. Ballard of Worcester, Massachusetts, who received his original patent in 1861.

Approximately 24,000 sporting and military rifles, carbines, and shotguns were manufactured between 1862 and 1873; Civil War sales account for half of this total. Five different New England companies produced various Ballard designs, with the New York firm of Merwin & Bray acting as sales agents throughout Ballard's brief history. Economic depression came to the United States in 1873, and diminishing sales forced Ballard into bankruptcy. All patent rights, equipment, parts inventories, and properties were purchased by New York arms dealers Schoverling and Daly, who handled sales and distribution of Ballard rifles after reaching an agreement with John Marlin to continue production. This partnership would prove to be highly successful for all parties involved.

In 1881, the Marlin Firearms Company was incorporated, and production of Ballard rifles continuing under the Marlin banner until they were eventually discontinued circa 1891 due to the rising popularity of repeating rifles. Marlin-Ballard rifles were and are well-known for their accuracy and workmanship, and fancy-grade long-range rifles are eagerly sought after by modern collectors. Marlin continued to expand his product line, introducing his Model 1881 lever-action tubular magazine repeating rifle in that year.

Many key features had been patented by Andrew Burgess and others, but John Marlin incorporated these into a single functional firearm. This rifle was available in a variety of calibers ranging from .32-40 to 45-70 Government, a feature that would not be duplicated by competing Winchesters for several more years. Marlin also produced several other lever action designs, concluding with the Model 1897, which remained in production until 1922. Shotguns became a part of the Marlin line in 1898, when the first of a series of slide-action guns was introduced. Production continued until 1915, but a .410 lever-action shotgun was also manufactured between 1929 and 1932.

John Marlin died in 1901, but the business continued under the leadership of his sons, Mahlon and John Marlin. During their tenure, the company expanded to include the Ideal Cartridge Reloading Company. In 1915, the Marlin Firearms Company was sold to a New York syndicate with close ties to financier J. P. Morgan, and became the Marlin-Rockwell Corporation. The outbreak of war in Europe focused the new company's efforts on the production of machine guns for use by infantry troops and in both aircraft and tanks. After the armistice of 1918, Marlin-Rockwell returned to the manufacture of civilian firearms. A reorganization in 1921 saw the company's name change to the Marlin Firearms Corporation, but, like Ballard before it, Marlin failed and went into receivership in 1923.

Marlin's assets were purchased by Frank Kenna, the son of a Union Army sergeant, pattern and model maker, Yale Law School graduate and businessman. Kenna began a revitalization of the company, but his efforts were hampered by the Great Depression. Beginning in 1937, Marlin also manufactured razor blades in addition to sporting arms. The Second World War years brought contracts for the manufacture of High Standard/UDM 42 9mm Parabellum caliber submachine guns, as well as barrels and other parts for the M1 Garand rifle and M1 carbine. During this period, Marlin also produced aircraft and other parts under contract for Bell Aircraft and other corporations. Defense contracts also provided a revenue source during the Korean War. Sporting arms has long been a staple for Marlin, and the company's place in the market has been consistently strong.