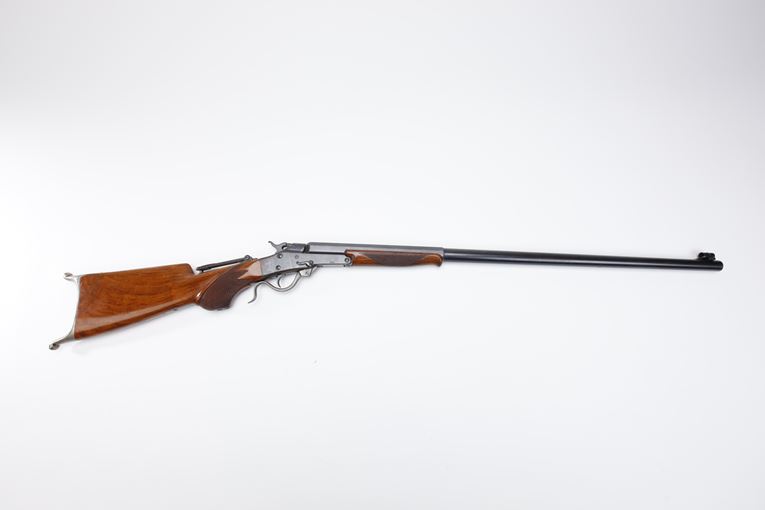 
Circa 1875 Maynard (U.S.) Pivoting Barrel Rifle (single-shot/ breech-loading/ black powder/ cartridge ammunition) Made by Massachusetts Arms Company, Maynard single-shot rifles were produced for middle-class Americans. Edward Maynard held patents for cartridges, breech-loading carbines, and other firearms products. His Improved Target Rifle No. 16 demonstrates that United States domestic civilian firearms, although produced for the average citizen, are of good quality. It also demonstrated that many people were interested in formal target shooting in 1875.

While the West was still wild, the East was becoming more sophisticated. Easterners were content to shoot at targets, while Westerners were more intent on shooting at game. Either way, a good rifle like the Maynard was useful, even though it didn't have the game-getting capacity of a repeater. --Dr. William L. Roberts, THE AMERICAN LIBERTY COLLECTION; #92 During the latter years of the 19th century, medium-range Schuetzen (offhand) matches became very popular.

A typical off-hand rifle of that period was fitted with an adjustable palm rest below the forearm. The palm rest often could be swung to a vertical position for firing, with the ball or grip piece held in the shooter's hand. The shooter's elbow was braced against his hip to provide the necessary steadiness in the off-hand position. Action of the typical Schuetzen rifle was fitted with a heavy barrel, usually octagonal, and the target sights were fully adjustable for windage and elevation. The action was fitted with double set triggers and an elaborate finger lever typical of the ornamental designs of the late 19th century. Also standard was a high comb buttstock to properly locate the shooter's face in the off-hand position, and an elaborate hooked buttplate to accurately position the butt of the rifle while firing.