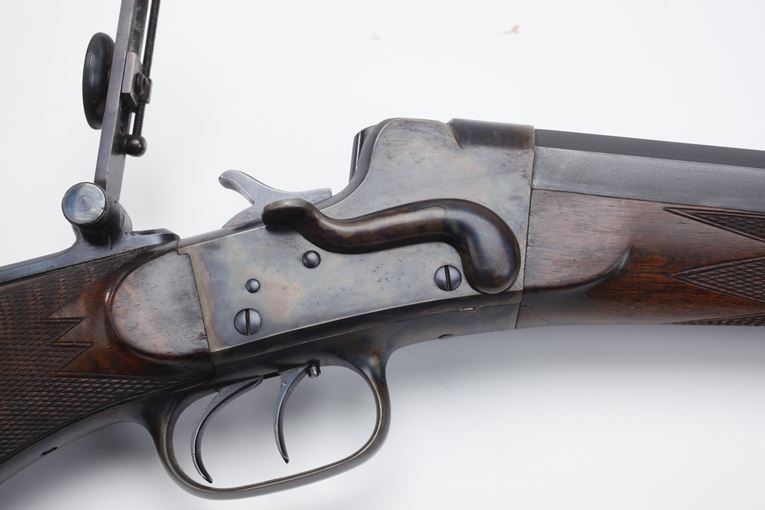 
Circa 1880 Remington-Hepburn (U.S.) No. 3 Falling Block Creedmoor Target Rifle (single-shot/ breech-loading/ black powder/ cartridge ammunition) In the 1880s, sophistication grew in the eastern United States. Towns and cities were urbanized, labor unions organized, education became important, and sports were popular. Among the latter, target shooting gathered thousands of adherents, particularly as the major rifle companies began to produce marvels of technology. This display gun represents one of these.

Lewis Hepburn, its inventor, was superintendent of Remington's mechanical department and a member of the American Creedmoor International Shooting Team. This falling-block target rifle is his contribution to the sport. --Dr. William L. Roberts, THE AMERICAN LIBERTY COLLECTION; #98 During the latter years of the 19th century, medium-range Schuetzen (offhand) matches became very popular.

A typical off-hand rifle of that period was fitted with an adjustable palm rest below the forearm. The palm rest often could be swung to a vertical position for firing, with the ball or grip piece held in the shooter's hand. The shooter's elbow was braced against his hip to provide the necessary steadiness in the off-hand position. Action of the typical Schuetzen rifle was fitted with a heavy barrel, usually octagonal, and the target sights were fully adjustable for windage and elevation. The action was fitted with double set triggers and an elaborate finger lever typical of the ornamental designs of the late 19th century. Also standard was a high comb buttstock to properly locate the shooter's face in the off-hand position, and an elaborate hooked buttplate to accurately position the butt of the rifle when firing.