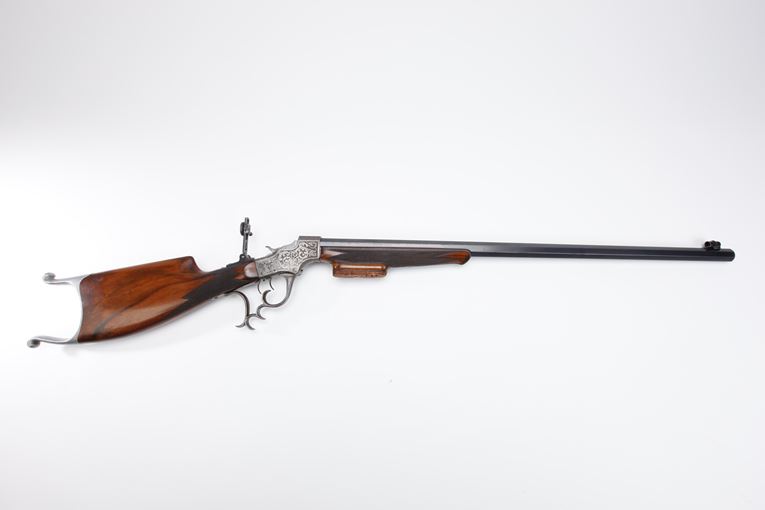 Under the supervision of noted barrel rifler Harry Pope, this Stevens single-shot rifle was factory-fitted with a target barrel. SN 490


Circa 1900 Stevens-Pope (U.S.) Lever-Action Falling-Block Rifle (single-shot/ breech-loading/ black powder/ cartridge ammunition) In his day, Harry M. Pope was judged to be the finest American barrel maker. During the late 1890s, he entered a joint venture with the Stevens Arms and Tool Company of Chicopee Falls, Massachusetts, which advertised itself as, the largest producer of sporting firearms in the world." This venture created marvelous lever-action target arms, such as this example. They were, however, an end of a breed, because tastes would be changing.

The next wave of American target arms would be bolt-action. The Spanish-American War started this change, when U.S. soldiers learned just how good bolt-action rifles were at handling large caliber bullets and putting them accurately on-target. The First World War completed the change by introducing millions of U.S. soldiers and sailors to the new action." --Dr. William L. Roberts, THE AMERICAN LIBERTY COLLECTION; #117 During the latter years of the 19th century, medium-range Schuetzen (offhand) matches became very popular.

A typical off-hand rifle of that period was fitted with an adjustable palm rest below the forearm. The palm rest often could be swung to a vertical position for firing, with the ball or grip piece held in the shooter's hand. The shooter's elbow was braced against his hip to provide the necessary steadiness in the off-hand position. Action of the typical Schuetzen rifle was fitted with a heavy barrel, usually octagonal, and the target sights were fully adjustable for windage and elevation. The action was fitted with double set triggers and an elaborate finger lever typical of the ornamental designs of the late 19th century. Also standard was a high comb buttstock to properly locate the shooter's face in the off-hand position, and an elaborate hooked buttplate to accurately position the butt of the rifle when firing.