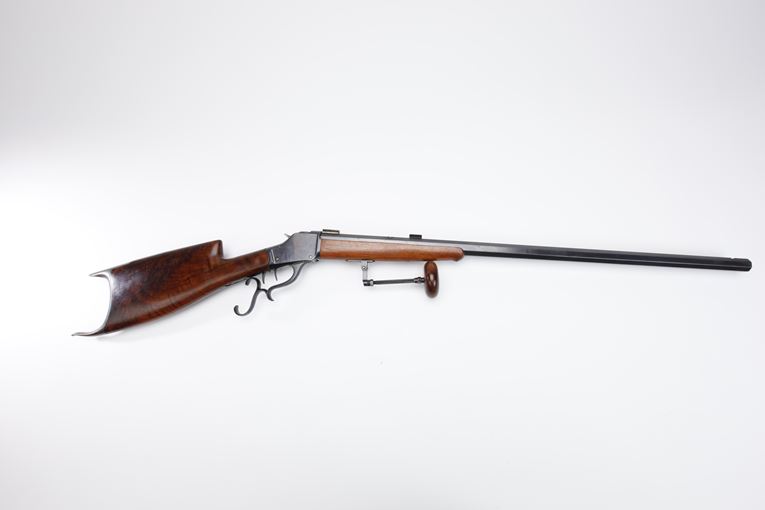 A year later, while visiting the Colt offices, Browning met Hart O. Berg of Fabrique Nationale of Belgium. Browning, Colt, and FN entered into a licensing agreement that gave the North American market to Colt, the European continent to FN, and a shared market in Great Britain. In addition, the two firms agreed to pay cross royalties for territorial "infringement." Browning was no stranger to Colt.

All told, John Browning received over 120 U.S. and foreign patents for over 80 different firearms, and his designs were produced by a variety of manufacturers. He died of heart failure in 1926 at age 71 in the Fabrique National office of his son, Val. - During the latter years of the 19th century, medium-range Schuetzen (offhand) matches became very popular. A typical off-hand rifle of that period was fitted with an adjustable palm rest below the forearm. The palm rest often could be swung to a vertical position for firing, with the ball or grip piece held in the shooter's hand. The shooter's elbow was braced against his hip to provide the necessary steadiness in the off-hand position. Action of the typical Scheutzen rifle was fitted with a heavy barrel, usually octagonal, and the target sights were fully adjustable for windage and elevation.

The action was fitted with double set triggers and an elaborate finger lever typical of the ornamental designs of the late 19th century. Also standard was a high comb buttstock to properly locate the shooter's face in the off-hand position, and an elaborate hooked buttplate to accurately position the butt of the rifle during firing.