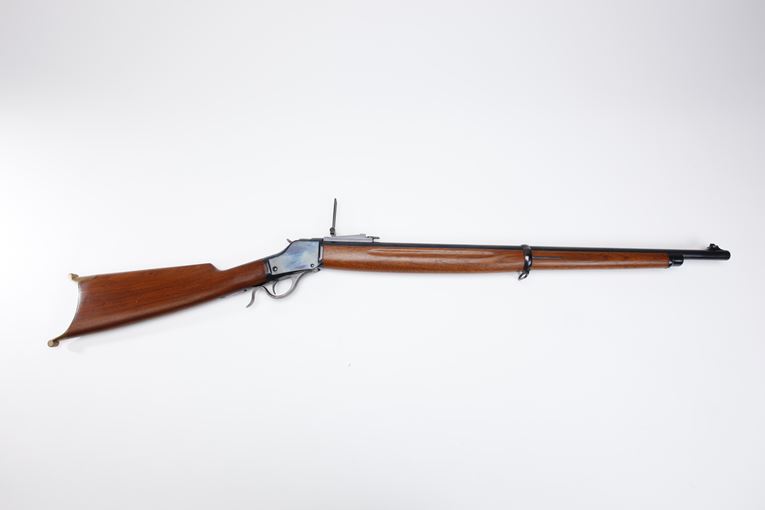 This circa-1910 "Winder musket" was made on a "Low Wall" receiver for youth competitive shooting events patterned after military matches once fired with muskets. SN 111804

As a result of this visit, Browning signed an agreement that licensed Colt to produce his pistols and promised additional licenses for improvements in these designs. In return, Colt agreed to provide royalties, something that was foreign to Winchester at that time, as the firm bought patents outright from their designers.

A year later, while visiting the Colt offices, Browning met Hart O. Berg of Fabrique Nationale of Belgium. Browning, Colt, and FN entered into a licensing agreement that gave the North American market to Colt, the European continent to FN, and a shared market in Great Britain. In addition, the two firms agreed to pay cross royalties for territorial "infringement." Browning was no stranger to Colt.

The second of these designs was for the B.A.R., or Browning Automatic Rifle, a 15-pound light machine gun that also chambered the .30-06 cartridge. When the United States went to war in 1917, the government bought production rights for these two guns, as well as the Colt Model 1911 pistol, for $750,000. Browning moved to Hartford to supervise the manufacture of these guns by Colt and other contractors, but by the time production reached its peak, the war had ended. However, these guns played an important role during the Second World War and other conflicts. Browning's post-First World War military designs included both water- and air-cooled .50 caliber machine guns, and a 37 millimeter automatic cannon for use in aircraft. For the civilian market, he was responsible for the Auto-5 semi-automatic shotgun, the Superposed double shotgun, the Hi-Power semi-automatic pistol, and several other designs, including a .22 caliber rifle with one spring and a single moving part.

All told, John Browning received over 120 U.S. and foreign patents for over 80 different firearms, and his designs were produced by a variety of manufacturers. He died of heart failure in 1926 at age 71 in the Fabrique National office of his son, Val. During the latter years of the 19th century, medium-range Schuetzen (offhand) matches became very popular. A typical off-hand rifle of that period was fitted with an adjustable palm rest below the forearm. The palm rest often could be swung to a vertical position for firing, with the ball or grip piece held in the shooter's hand. The shooter's elbow was braced against his hip to provide the necessary steadiness in the off-hand position.