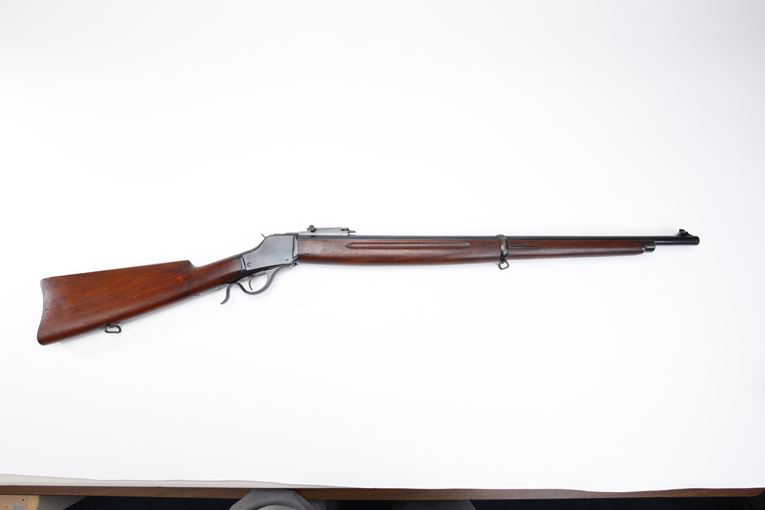 Fitted with both tang and telescopic sights, this "High Wall" rifle could have been used in both target shooting and hunting activities. The Model 1885, Winchester's first single-shot rifle, was manufactured circa 1885-1920 in both High Wall and Low Wall configuration. SN 121974

The High Wall is so called because of its high sides which conceal the breech and hammer (except for the spur). These guns reflect U.S. social inclination toward rugged individualism and cultural inclination toward shared national pride. U.S. heroes such as Theodore Roosevelt needed only one shot to hit a target.

Legends like Paul Bunyon were figureheads of patriotic fervor. U.S. society, particularly in the west, was becoming very proud of itself. Single-shot arms kindled this fervor by giving hunters boasting rights when their one shot was successful. --Dr. William L. Roberts, THE AMERICAN LIBERTY COLLECTION; #101 During the latter years of the 19th century, medium-range Schuetzen (offhand) matches became very popular.

A typical off-hand rifle of that period was fitted with an adjustable palm rest below the forearm. The palm rest often could be swung to a vertical position for firing, with the ball or grip piece held in the shooter's hand. The shooter's elbow was braced against his hip to provide the necessary steadiness in the off-hand position.

Action of the typical Schuetzen rifle was fitted with a heavy barrel, usually octagonal, and the target sights were fully adjustable for windage and elevation. The action was fitted with double set triggers and an elaborate finger lever typical of the ornamental designs of the late 19th century. Also standard was a high comb buttstock to properly locate the shooter's face in the off-hand position, and an elaborate hooked buttplate to accurately position the butt of the rifle when firing.