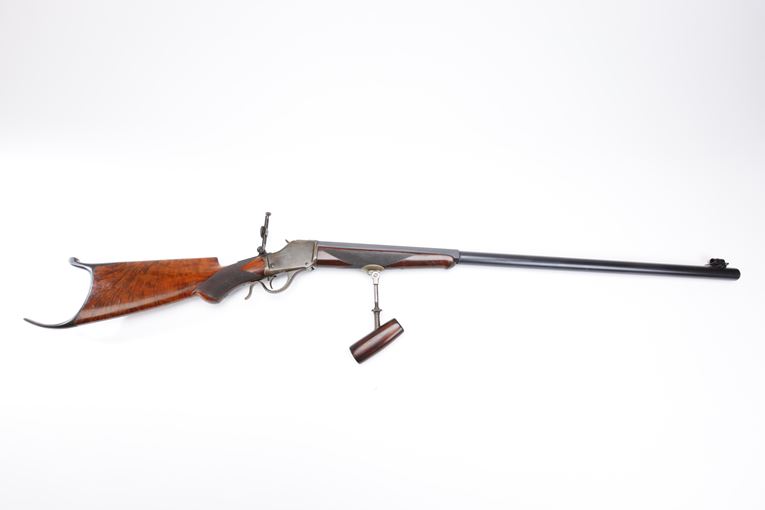 Manufactured for a left-handed shooter, this "High Wall" was equipped with a special wind gauge front sight and palm rest. The Model 1885, Winchester's first single shot rifle, was manufactured c. 1885-1920 in both High Wall and Low Wall configuration. SN 56427


Circa 1893 Winchester (U.S.) Falling-Block Schuetzen Target Rifle (single-shot/ breech-loading/ black powder/ cartridge ammunition) By the end of the nineteenth century, three general groups of target rifles had been developed: 1) Scheutzen, or off-hand, 2) Creedmoor, or long-range, and 3) Bench Rest, or stationary. Another name for Scheutzen today is free" or "international" rifle. Target shooting became a recognized sport in the United States during the 1850s; continuing today in international, national, regional, and local meets.

This Scheutzen was built around 1890 and represents the German or Swiss school, having set triggers, vernier sights, palm rests, and prong butt plates. It is the cream of nineteenth century U.S. rifles. The U.S. became a nation that valued target shooting as a sport. This value system helped put the relatively new nation on a par with the countries of Europe." --Dr. William L. Roberts, THE AMERICAN LIBERTY COLLECTION; #107 During the latter years of the 19th century, medium-range Schuetzen (offhand) matches became very popular.

A typical off-hand rifle of that period was fitted with an adjustable palm rest below the forearm. The palm rest often could be swung to a vertical position for firing, with the ball or grip piece held in the shooter's hand. The shooter's elbow was braced against his hip to provide the necessary steadiness in the off-hand position. Action of the typical Schuetzen rifle was fitted with a heavy barrel, usually octagonal, and the target sights were fully adjustable for windage and elevation.

The action was fitted with double set triggers and an elaborate finger lever typical of the ornamental designs of the late 19th century. Also standard was a high comb buttstock to properly locate the shooter's face in the off-hand position, and an elaborate hooked buttplate to accurately position the butt of the rifle when firing.