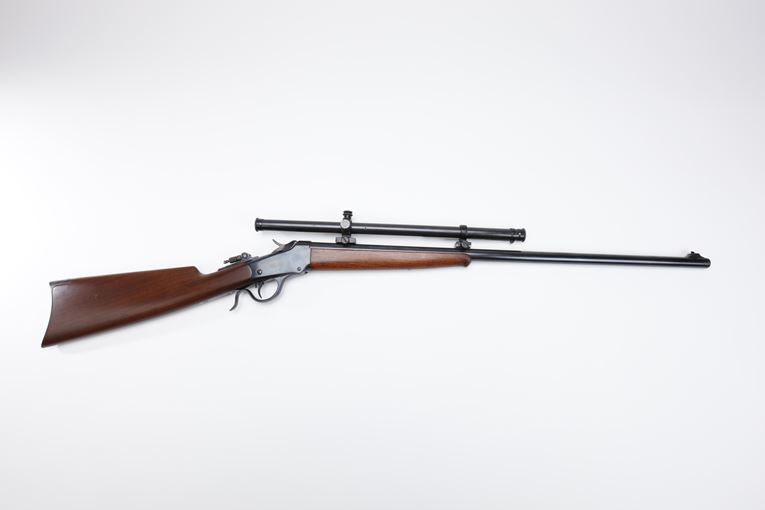 In "Low Wall" configuration, the receiver of the Winchester single shot was low enough that the breechblock and hammer were both exposed. The Model 1885, Winchester's first single shot rifle, was manufactured c. 1885-1920 in both High Wall and Low Wall configuration. SN 91354


Circa 1885 Winchester (U.S.) Low Wall Lever-Action Falling-Block Rifle (single-shot/ breech-loading/ black powder/ cartridge ammunition) Also designed by John M. Browning, the Low Wall Winchester appeared about the same time as the High Wall (see Case 45 gun #13). Also a single-shot arm, it features low sides on the frame with the breech and hammer quite visible. It may truly be said that in the 1880s and 1890s, eastern shooters loved lever-action single-shot hunting and target rifles.

This love, however, did not penetrate so much to western areas of the country, where self-protection was paramount. In the west, the repeater was to remain king and would eventually rule the entire country for purposes of protection. In Canada, the United States, and Mexico, this consideration would always be the paramount priority for people in the selection of guns. --Dr. William L. Roberts, THE AMERICAN LIBERTY COLLECTION; #103 During the latter years of the 19th century, medium-range Schuetzen (offhand) matches became very popular. A typical off-hand rifle of that period was fitted with an adjustable palm rest below the forearm. The palm rest often could be swung to a vertical position for firing, with the ball or grip piece held in the shooter's hand. The shooter's elbow was braced against his hip to provide the necessary steadiness in the off-hand position.

Action of the typical Schuetzen rifle was fitted with a heavy barrel, usually octagonal, and the target sights were fully adjustable for windage and elevation. The action was fitted with double set triggers and an elaborate finger lever typical of the ornamental designs of the late 19th century. Also standard was a high comb buttstock to properly locate the shooter's face in the off-hand position, and an elaborate hooked buttplate to accurately position the butt of the rifle when firing.