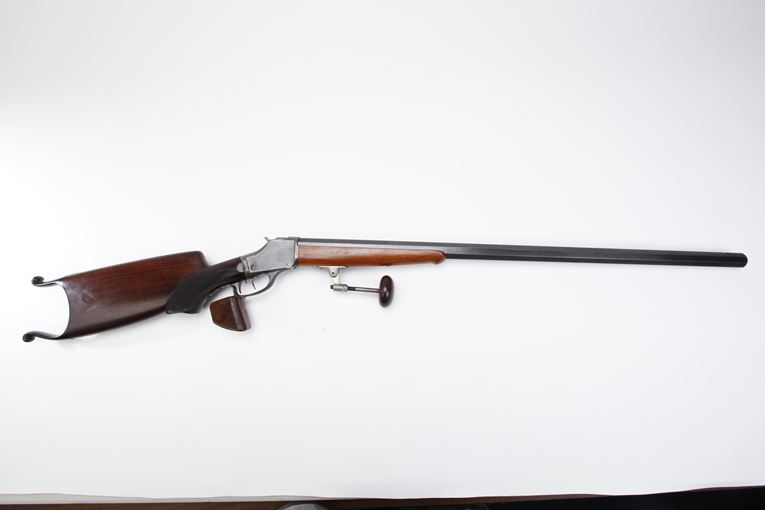 The barrel on this rifle was produced by Master Gunsmith Harry Pope, who fitted a false muzzle to allow muzzle-loading a bullet atop a breech-loaded cartridge case containing primer and powder. The Model 1885, Winchester's first single shot rifle, was manufactured c. 1885-1920 in both High Wall and Low Wall configuration.

At this time, Winchester's popular Model 1873 lever-action rifle could not handle large-caliber ammunition such as the .45-70 cartridge. Browning set himself to this task, and he designed and patented a simple but strong lever-action rifle with a smooth action.

All told, John Browning received over 120 U.S. and foreign patents for over 80 different firearms, and his designs were produced by a variety of manufacturers. He died of heart failure in 1926 at age 71 in the Fabrique National office of his son, Val. - During the latter years of the 19th century, medium-range Schuetzen (offhand) matches became very popular. A typical off-hand rifle of that period was fitted with an adjustable palm rest below the forearm. The palm rest often could be swung to a vertical position for firing, with the ball or grip piece held in the shooter's hand. The shooter's elbow was braced against his hip to provide the necessary steadiness in the off-hand position.