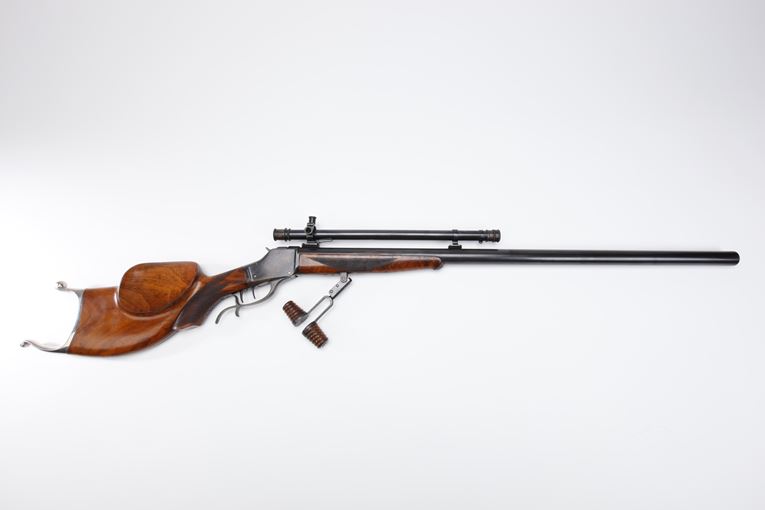 This single shot rifle was modified for Schuetzen competition with a George Schoyen heavy target barrel, palm rest, and shad-belly buttstock. For consistency, Schuetzen rifles were often used with only one cartridge case, which was pr-primed and re-loaded with powder for each shot. The bullet was seated separately in the bore, either from the breech or muzzle end, to about 1/16-inch ahead of the cartridge case. The Model 1885, Winchester's first single shot rifle, was manufactured c. 1885-1920 in both High Wall and Low Wall configuration.

In 1857, financial problems forced Volcanic into insolvency. The company's assets were purchased by Oliver Winchester, who by this time had become Volcanic's president. Winchester reorganized the firm and resumed operations under the name of New Haven Arms Company. Unlike others in the field of firearms manufacture during this period, Winchester's talents lay not as an inventor but as a successful businessman. This success would continue with New Haven, and it extended beyond financial matters to the staffing of the new company. Among those hired by Oliver Winchester was B. Tyler Henry, who became plant manager. Henry had a great deal of experience with repeating firearms, having worked previously for various arms makers, including Smith & Wesson. One of his tasks was to develop a metallic cartridge to replace the inferior self-contained bullets chambered by the Volcanic. Others, including Daniel Wesson, were also working on this problem, and Wesson's .22 rimfire cartridge may have influenced Henry's efforts.

The Model 1886 was a milestone for the company in two respects: it marked the first association between Winchester and designer John Browning, and it was also the first lever-action rifle capable of chambering big-game calibers, including the .50-110 Express cartridge. Other Browning-designed Winchesters include the Model 1885 single-shot rifle, Model 1887 lever-action shotgun, Model 1890 slide-action rifle, Model 1893, Model 1894, and Model 1895 lever-action rifles. The Model 1894 alone accounted for over five million sales and is still in production. Winchester was able to enter the military market in later years, with sales both to foreign governments and to the U.S. Army. During both World Wars, Winchester-manufactured rifles and shotguns served U.S. and Allied troops in various parts of the globe.

Oliver Winchester died in December, 1880 at the age of 70, but both his name and his company survive. The Winchester Repeating Arms Company was acquired by Olin Corporation, which created U.S. Repeating Arms as the manufacturer of Winchester rifles and shotguns. In addition, Winchester arms were produced by Miroku of Japan.

In 1992, U.S. Repeating Arms was purchased by Giat of France. - During the latter years of the 19th century, medium-range Schuetzen (offhand) matches became very popular. A typical off-hand rifle of that period was fitted with an adjustable palm rest below the forearm. The palm rest often could be swung to a vertical position for firing, with the ball or grip piece held in the shooter's hand. The shooter's elbow was braced against his hip to provide the necessary steadiness in the off-hand position. Action of the typical Scheutzen rifle was fitted with a heavy barrel, usually octagonal, and the target sights were fully adjustable for windage and elevation. The action was fitted with double set triggers and an elaborate finger lever typical of the ornamental designs of the late 19th century. Also standard was a high comb buttstock to properly locate the shooter's face in the off-hand position, and an elaborate hooked buttplate to accurately position the butt of the rifle during firing.